I need to build a dual 5 volts power supply capable of 200mA output current. I've seen designs using TLE2426 and BUF634, but they cost too much for my project.

Is it possible to use a simple OpAmp circuit like this one (from here): 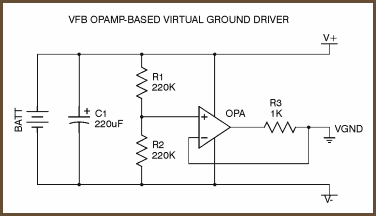 Which uses a uA741, and then increase the current output by adding transistors to the VGND? Since the VGND needs to both source and sink current, I may need to add two transistors, one positive and one negative, but I don't know how they should be arranged.

If this solution works, what would be the correct design for it?

The Sijosae transistor circuit shown in your link could use the uA741's output as the reference. It can be enhanced further by using Darlington drivers.

As follows (simulate it here): 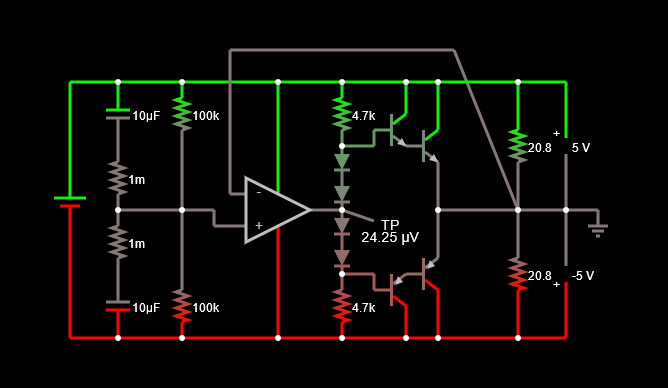 What's going on: The four diodes lift the bases to provide a class-AB operation to reduce crossover distortion. The extra current gain provided by the Darlington pairs provides enough hit for the drive pair to get good load regulation without taxing the uA741's output drive. Result? This is really stiff: it'll deliver 5A in each rail given adequately-sized transistors.

What's not good about it: too many parts, and some tolerance issues that would lead to difficulty in setting the class-AB bias current. Here's a version using a Sziklai type connection (simulate it here): 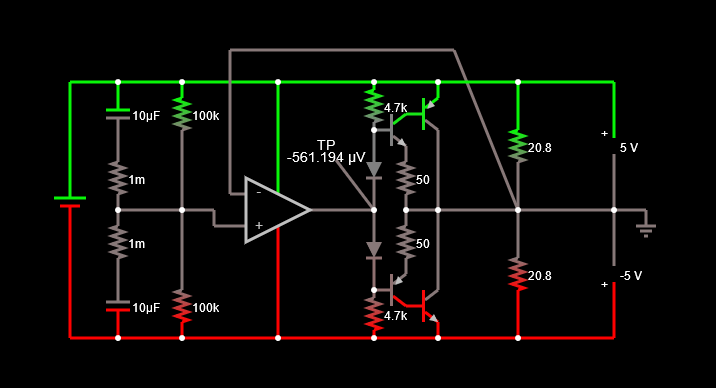 This is better. Only one class-AB biasing diode in each side (fewer matching issues), and the swing required at the op-amp is still small. Still has low crossover distortion.

Idle current can be adjusted by changing the 4.7k resistors, and gain by adjusting the ratio between the 4.7k and 50 ohm (the latter providing negative feedback.)

How well does it work? It also can provide up to 5A in either direction.

And finally, here's a circuit that works reasonably well, though not as stiff as the Darlington ones (simulate it here):

This one limits out at about 2A, when the uA741 driver maxes out at 23mA and can't sink or source enough current. Nevertheless it's the simplest solution using the uA741 and external drivers. At very-close-to-balanced, has more crossover distortion than the other two above (basically that of the op-amp itself.)

Guess what? It works even better with FETs. 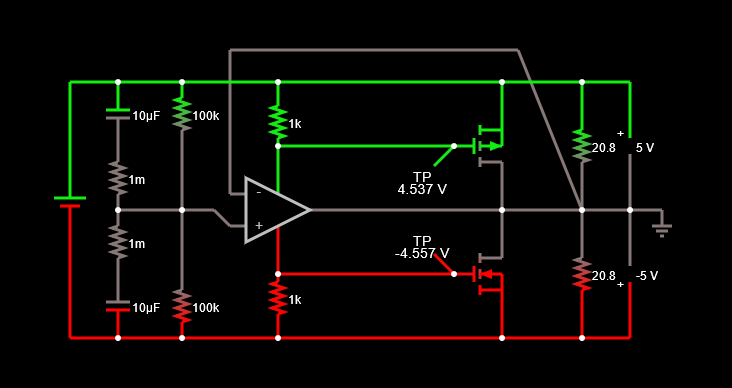 Gives the full 5A, depending on the FETs (for this application cheap ones like 2N7001 types could be used.) Same crossover distortion, which could be improved with a different op-amp.

Verified with LM741 and 9V battery 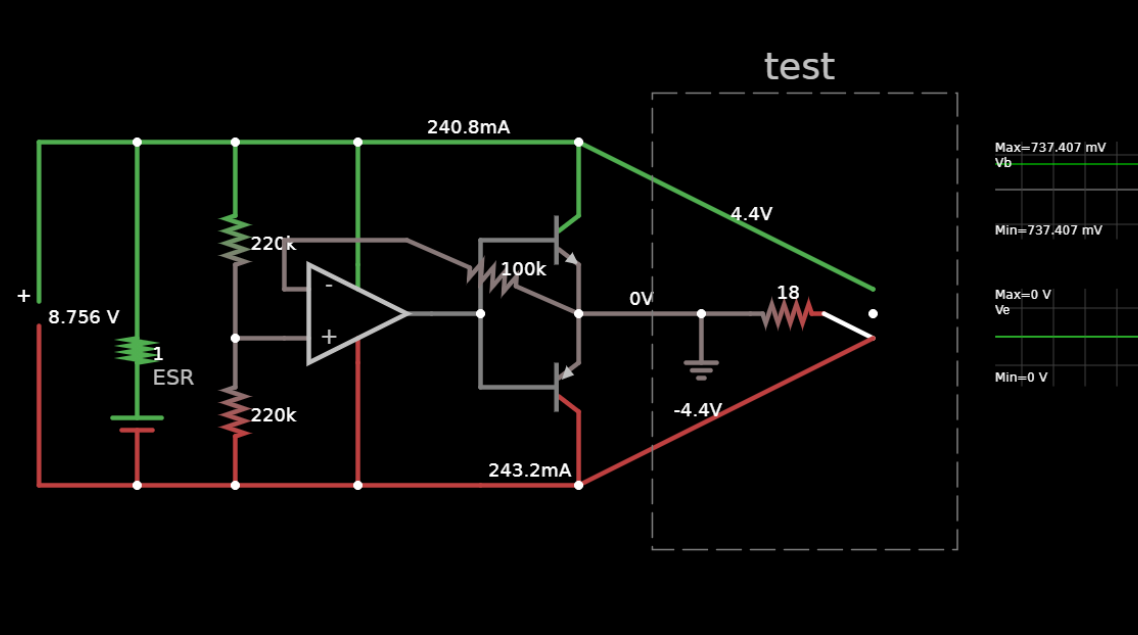 Batteries all have ESR and tend to be noisy, so caps on input or feedback will reduce the noise.

Let's start with the simple answer: 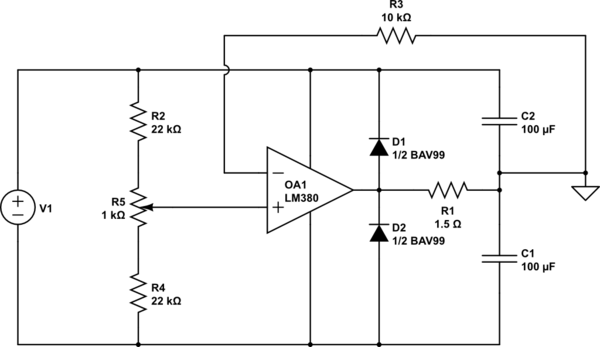 I've added a potentiometer where you can adjust the ground reference so that the bipolar power supply rails are nearly equal to each other. I've also added \$R_1\$ as a way to better avoid oscillation issues. But the value is kind of arbitrary. I didn't do any serious thinking beyond the idea that I wanted it to drop about \$300\:\text{mV}\$ at your maximum current magnitude.

Keep in mind that this is not a voltage regulator system. You will get a split power supply. But you will not get a regulated split power supply. The virtual ground will hold a midpoint between the voltage supply rails. But there's no regulation. If you need regulation, as well, then you will need to add it and account for any associated overhead.

I'm still open to the idea of showing you what a "more complex" approach might look like. But the above schematic is so easy and you can get the parts, that I do NOT recommend the following schemtic in your case. The following circuit still requires an opamp but it surrounds the thing with external drive components. It is essentially just an audio amplifier (like the LM380 and LM384.) But done discretely. 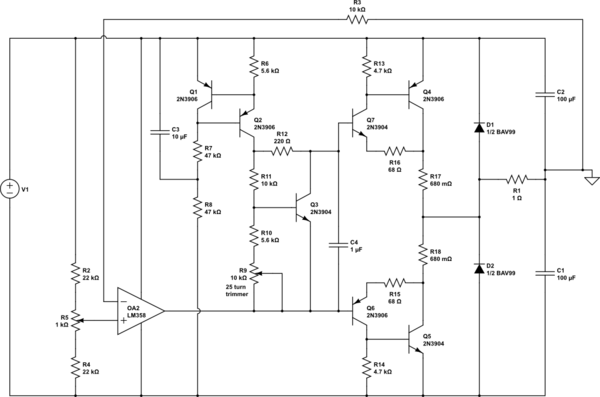 (I've not attempted to examine the above for stability. The LM358 is a concern to me, right now. So it may not be at all stable. So please just treat it for illustration purposes, for now. A more modern opamp may be required here.)

You can see now why you really want to use an audio amplifier IC. ;)

If noise is not a problem, you can use a buck switching converter make 5V from the 10V input.

It has to be a synchronous buck though, with two FETs. Then, the output is able to sink and source current.

Those parts are expensive because they are old parts (antiques). TI suggests using BUF634A instead.

seems to be about $3

At 10V there are probably even cheaper op-amps that could be used. possibly rail-splitter chips too.

Not the answer you're looking for? Browse other questions tagged mosfet dual-supply or ask your own question.