I read the paper "Simplified Analysis of PWM Converters Using The Model of The PWM Switch", and I have some questions about the model of DCM (Discontinuous Conduction Mode) flyback.

This is in the DCM condition. and I would like to use PWM switch to model it.

1.) In this paper, about equation(3) I don't know why vac equal to VL, why it doesn't consider the Vin, it looks like neglect the Vin.

You are in DCM, so the switch is neither in the a position, nor in p, but floating in the middle. Therefore there are two voltages, V(a,c) and V(c,p), which are dependent on the previous states because of the inductor and capacitor -- reactive elements, or elements with memory.

So, if coming from the CCM side, the switch was in the a position, thus the inductor was energized, and now that the switch is opened, you get the same voltage, with a negative sign. But since the voltage is expressed as V(a,c), not V(c,a), there is no need for the minus. All this happens on the ON time, thus for \$D\$.

On the p side, the capacitor would have been charged by this voltage, and the load is supplied only by the capacitor. The voltage that appears is the same as the one transferred by the inductor, hence the equation as a function of the OFF time, or \$D'\$, or \$D_2\$.

I have to stress out the DCM part -- Discontinuous Conduction Mode. In this mode, you no longer talk about \$D\$ and \$D_2\$, only, you are inherently talking about \$D_3\$, which is the moment the switch is not in the a position, or in p, it's "floating" in the x position: 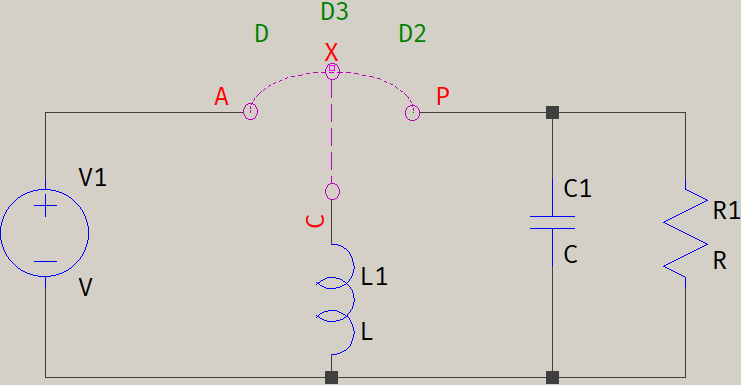 The waveform is also no longer a repeated triangle, it has the \$D_3\$ portion which is flat. See fig. 3 in that document, it clearly shows that after \$D\$ and \$D_2\$ there is a portion where there is no current flowing: 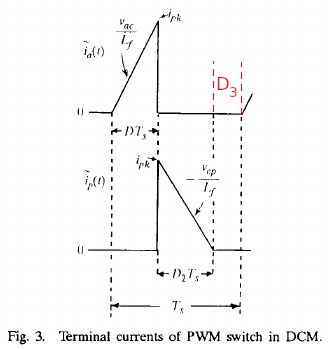 And those formulas stem from the memory effect of the reactive components. Looking at the schematic, when the switch was in the a position, Vin would fall on L for the duration of \$D\$, giving the formula (3) (but with a negative sign, I explained before). Then it would switch to p for the duration of \$D_2\$, where the charged inductor discharges to the capacitor + load. Finally, it switches to the x position and stays there for the duration of \$D_3\$, when nothing happens because the inductor is discharged and the only volage on the load is that of the discharging capacitor -- the only one holding the line.

So, yes, all those 4 equations are from the CCM part, but now there is another part, the \$D_3\$ part, where nothing happens in the inductor, there is no current flowing. The 5th and 6th equations would look like this:

Not the answer you're looking for? Browse other questions tagged buck-boost small-signal model or ask your own question.

0
current control PWM switch model?
0
Where does the negative inductor current go during CCM at no load in synchronous converters?
0
Which transition mode for the four switch buck boost converter is correct?
0
What is the control Input of the small signal current mode PWM switch
0
Small signal modelling of buck converter, varying frequency
0
Small signal model of Boost DCM