I've built an array of Infra Red LEDs on a 4x4 grid. I want to get the most power out of these LEDs as I can, but I'm scared I might burn them out.

Right now, I'm using 2AA batteries (1.5V each), which is powering the array.

First of all, the starting volts is 3V right? When I measure the voltage at the other end, I get about 1.5V (There's about 6 feet of cable from the battery to the LEDs).

Even with this powering the array, they get very warm and smell a little. Is this too much voltage? Help me out here,

The array contains 16 IR LEDs, each require maximum of 5 Volts. So surely 80 Volts would be ideal? Then again, that doesn't sound right - and I don't know anything about electronics.

One more thing, I haven't used a resister at all within this array. I normally use one for a normal LED, but the IRs didn't light up at all with it, and works fine without one.

Here is a rough diagram showing you how I have it wired up: 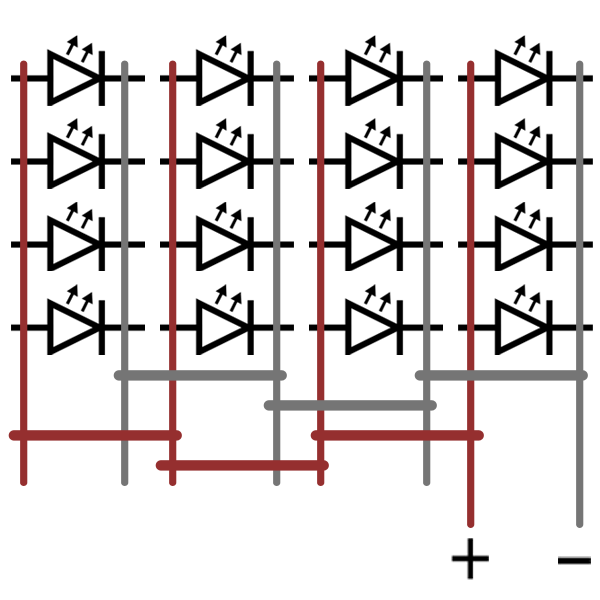 FYI: I'm hoping to hook this up to an Arduino at some point.

The only reason you have not vaporized your LEDs is because your AA batteries can't supply so much current. The "maximum 5V" you cite is the maximum reverse voltage these LEDs can before they break. Remember an LED is a diode which allows current in only one direction. 5V is the maximum voltage when you have them installed backwards

You should read How can I efficiently drive an LED? which covers most of this.

You need a current-limiting resistor!

I normally use one for a normal LED, but the IRs didn't light up at all with it, and works fine without one.

Were you using an infrared camera to detect if the LED lit up? You're not going to be able to see whether it lights up or not... it's infrared!

Look for other questions about calculating the correct current-limiting resistor for the diode to operate at its \$I_f\$ (forward current) rating.

The diagram showing one current limiting resistor for four parallel LED's would work, but could have problems.

Now imagine one of the LED's fails in a group of four. The voltage drop across the LED's is the same (1.6) but the current should now be limited to 60mA, not 80mA. The current-limiting resistor is no longer the appropriate value to limit current to 60mA at it's 1.4V. If three out of four LED's were to fail or be removed, you'd now have 80mA available for one LED, which for this example of a diode expecting \$I_f\$ of 20mA is likely too much.

This is just an example of how things could fail. It's very likely that the circuit, as described, would work for a long time. If I were designing this to be a commercial product, I would change it.

This setup of LEDs is parallel so your forward voltage of the LED is 1.6V. Do not use 80V! You have to use a limiting resistor so that your per LED current doesn't exceed 80ma. Total current of the array would be 1280ma. Remember 100ma / LED is absolute maximum according to the datasheet!.

If you look at the datasheet, you'll see a spec called the 'DC forward voltage'. This is the voltage that the LED needs to operate, and the voltage across the LED will always be either zero, negative (upto -5V, where it reaches reverse breakdown), upto 1.6 volts, where is isn't conducting, or 1.6 volts, which is the only condition where the LED is actually operating and emitting light. This derives directly from the standard characteristics of any Diode, the LED being an example of it. Whatever voltage you apply across a diode greater than the diode forward voltage, the diode will act as a short circuit between the voltage at the diodes anode and the (cathode+forward voltage). As per ohms law, this means an infinite current can flow through the diode (in first approximation kind of theory). The resistor which you use in series normally allows an LED to function by causing the voltage to drop from the source voltage (3 volts in your case) to the required (1.6V). In doing so, it also sets the current through the LED as per ohms law, ie, I = (3.0-1.6)/R.

If you look at the datasheet again, you'll see a spec for the Absolute Maximum of 100mA. Its usually a good idea to not test absolute maximum ratings, so you should make sure that your resistors set the current at something less than that, say 90 mA. If you're application calls for pulsed operation, you can look at the pulsed current rating instead. Usually this is specified for less than 50% duty cycle so that the LED has time to cool.

Note that if you use resistors to cause the required voltage drop, then you'll be wasting energy which is dissipated from the resistor. This is the hallmark of any linear regulation mechanism. You can calculate the dissipation from the joule heating formula of P=VI. It's generally best to use one resistor per LED since each lED may have a slightly different forward voltage. Also, the resistive dissipation is then distributed between the many resistors.

You can avoid this waste of energy using a switching supply. The goal would be to supply the LEDs at exactly the voltage they need (1.6V) and the current you need per your illumination requirements. There are a number of LED driver ICs available which do this, and other answered questions related to LED driving.

Not the answer you're looking for? Browse other questions tagged led voltage or ask your own question.

7
Using diodes to limit current to LEDs
0
Voltage and Amperage for LED Cube
0
When will parallel LED voltage drops become an issue
65
Why is kerosene stopping my red LEDs from illuminating?
1
How to light a strip of 32 LCD backlight LEDs
0
Powering 7 LEDs in series
0
Why are LEDs so tolerant of voltage?