What do I need to know about oscilloscope probes?

I've run across a Hitachi V-355 oscilloscope, and a friend who's willing to give me a deal if I want it. Unfortunately, there are no probes that come with it. I was searching for probes, only to learn that they're STUPID expensive (either that or I'm STUPID cheap), and I can't find any to borrow.

So here's my thought: I have a ton of test probes from, say, my multimeter. I have a stable of patch cables in every possible banana plug/alligator clip/springy pin clip configuration possible. I also have a whole mess of BNC connectors and adapters in my video cable repair kit.

So here's my question: Can I just solder an alligator clip cable to a BNC connector and have an oscilloscope probe? Or is there something special going on inside those probes that makes 'em cost $50.00?

If the latter, and I end up biting the bullet and getting real, honest and for true oscilloscope probes, what are some things I need to be aware of when shopping?

Oscilloscope probes aren't just pieces of wire with pointy end attached to them. Typical probe will in addition to the pointy stick and the alligator clip have the input attenuation circuitry and impedance matching circuitry inside.

In parallel with the probe's input resistance you have the compensation capacitor. When buying a probe, you should pay attention that the capacitor's value can match the value of scope's input capacitance.

Another important part of the probe is the tip capacitance. It's modeled as a capacitor in parallel with the signal. It's purpose is to slow down the rise time of the signal entering the probe, which is in general considered a negative effect. The tip capacitance probably won't be of too much importance for a scope such as the one you're considering, but for higher frequencies, it could cause problems when accurate measurement of rise time is needed.

Some probes have what's called high frequency compensation too. You probably don't want to pay for such a probe, but I'll just mention it for completeness. The high frequency compensation part will usually be in the BNC cable connector of the probe and consists of a series connection of a resistor and variable capacitor placed parallel to the signal path. It's used to fix problems with impedance increase with frequency due to cable inductance. Basically the impedance will decrease more or less linearly with the frequency until we reach the resonant frequency of the probe. After that, it will increase. The compensation system is used to move the resonant frequency point away from the frequency range we're interested in using the scope with.

Finally, there's a free book available from Tektronix (if you want to give them your e-mail address) which explains how probes work in great detail. It's called ABC of probes and is currently available from here.

What is too expensive?

I've had excellent experiences with the ultra-cheap $12 dealextreme oscilloscope probes: 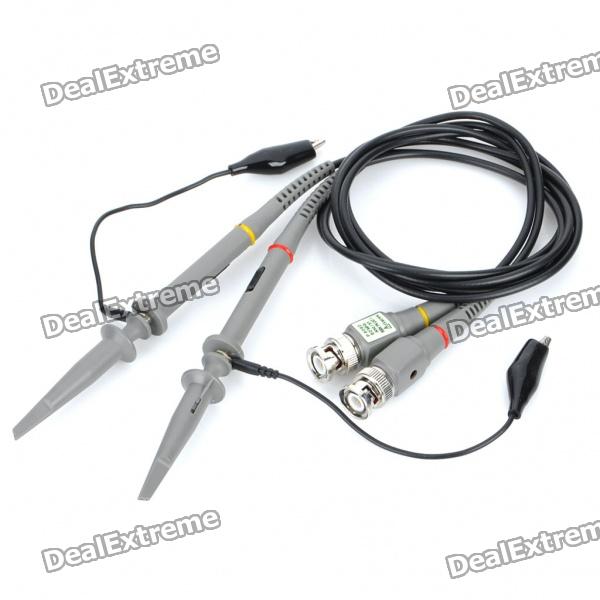 They seem to be nearly identical to the probes that come with Owon Digital scopes, and for $12, they're practically disposable. I initially bought a pair out of curiosity, and they were nice enough that I have bought two additional pairs. The coax is very nice and soft and flexible, and they are good up to at least 10 Mhz (I don't have a faster signal generator at the moment), from my testing.

Dealextreme also has a lot of other scope probes, of varying speed rating, etc...

This page has some information about what goes into tuning oscilloscope probes and provides a simplified model of a probe. Even with top-end passive probes they need to be calibrated to match the analog front ends of a given scope. Otherwise you'll get strange visible attenuation/overshoot effects.

As a note long un-shielded leads will act as an antenna and pick up EMI noise from the environment. You want your leads to be short to provide the best high-frequency response.

You can also try your luck on Ebay, though I would strongly caution against something that looks too good to be true.

Use them only for signals, never as power wires. The central wire is very thin to keep capacitance low(*), and too much current may burn them.

(*) The capacitance of a coax cable is determined by the ratio inner/outer diameter.

You can solder alligator clips to BNC connectors and get a "probe" that works at low frequencies. It won't work well at high frequencies, however. If you want to understand why, I suggest you read How does the current know how much to flow, before having seen the resistor?

Probes that will work well enough for hobby use up to 35 MHz (the limit of that scope, it seems) can be had for well under $50. Try MPJA. I've owned a pair of their 40 MHz probes for years, and they work at least as well as my cheap 30 MHz scope.

It seems like a lot of discouraging information here. I would say - if you dare, just build it. it is a great way of learning how things works, and a great method of finding out the right balance between "cheap" and "useful".

Whatever was said, a BNC connector with two feet of coax and some connectors WILL work. It might not be ideal at high frequencies, it might damp the edges of fast changing signals, the loading of some sorts of super high impedance/low signal circuits might be far from optimal - but IT IS going to work. If you ultimately find that such a piece of homemade equipment puts limit on whatever you're doing - then either buy one off the shelf or make a better one yourself.

You aren't going to kill anything, you might just get less-than-perfect measurements.

I have at least four factory probes at my lab but once i've ran out of these as needed to connect also a triggering source and waveform generator. Too bad. So i have taken an old UHF antenna base and slashed the BNC along with few feet of cable. Initially i have used this for generator output only and at 20 Mhz it was fine. Later, however, i have used this as a scope input probe and it worked out very well despite generic RG58 cable used for it - square wave signal was having the raising/falling edges a little bit more "rounded" than i would expect, but nothing tragic as well.

Here is a nice PDF from Keysight with information about probes.

Or is there something special going on inside those probes that makes 'em cost $50.00?

Sure there is, take a look at this ZS2500 probe from LeCroy at a price of $7,160.40. You pay all this value to be able to see high speed signals with fidelity, and without modifying too much the characteristics of the circuit being measured.

You don't need anything fancy while working on low frequencies and low voltage. I started using simple wire with the ends stripped and plugging those in to the central axial input, and a single alligator wire as my ground on the outer axial. Works great when analysing logic ASMs. I do the same with the multimeter station, just make sure you aren't measuring anything high-voltage and/or high amperage, or you will burn more than just your finger tips and wire.

If you are a complete rookie don't risk it, make sure you learn the basics and dangers, under supervision, before you start hacking up your own low budget solutions.

168
How does the current know how much to flow, before having seen the resistor?
26
What to look for in an oscilloscope?