What's the RMS voltage of this asymmetric rectangle function?

I recorded this asymmetric rectangle function: 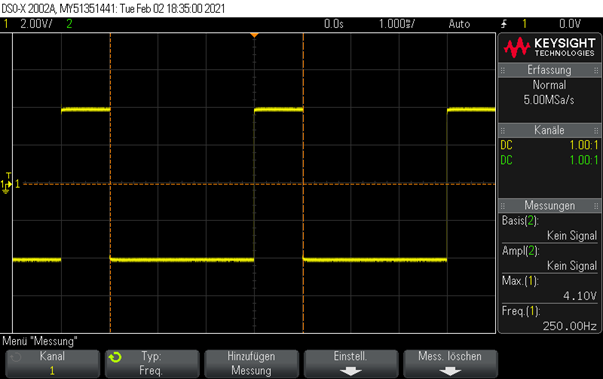 I calculated the RMS voltage to be equal to the amplitude (4,10 V in this case)

However when I measured this exact signal with a TrueRMS multimeter, it showed 3,54 V.

Where is my error?

The true RMS of that waveform is exactly 4.1 V, it has the same heating effect as 4.1 V DC.

I wonder if your meter is only measuring the AC component?

Well, assuming your wave is symmetric (that is, the positive as well as the negative part have the same magnitude), your calculation is right.

You don't know what that "TrueRMS" multimeter does, or what it does expect in a signal. Quite possibly it expects a signal composed of harmonic signals below some relatively low frequency (i.e. the meter has a bandwidth), whereas a square wave has infinite support in spectrum - all power above the point at which the meter's bandwidth ends is ignored; you get less power, and the square of the average power is thus also lower.

Regardless of duty cycle the power that can be dissipated into a resistive load for V+= |V-| the Vrms=Vpk.

But in your case if you applied +/- 4V and with noise on your measurement, the scope will read V+ + Vnoise = 4.1 , so eyeballing it, that appears to be closer to 4V or the average of each peak.

Putting the 20MHz filter on the noise may improve the scope reading on this low f signal.

Test your meter at different frequencies and check the manual specifications.

You have a fundamental (250Hz) that is pretty high in relation to mains to start with.

Typically cheap true-RMS meters don't bother to tell you that the frequency limit is for sinusoidal waves and non-sinusoidal will have less accuracy. A relatively good meter such as the Fluke 179 lists ACV accuracy as +/-4% + 3 digits up to 500Hz.

A cheaper meter such as the Extech EX411A lists ACV bandwidth as up to 1kHz and claims 1% accuracy (no mention of waveform).

You're seeing an error of -21%, which is large but plausible for an inexpensive meter.

Check the reading at lower frequency (such as 50Hz) and see if it is closer.

Edit: I think Neil's answer is correct- the meter is AC coupled and ignores the DC component. Easy to test, input a DC voltage and if it reads zero you have your answer.

Not the answer you're looking for? Browse other questions tagged voltage rms or ask your own question.

1
what's the maximum output voltage of my soundcard?
3
In a line-level audio signal, what function of voltage produces amplitude?
0
Indicated vs. true RMS value of sawtooth waveform
3
Is this true RMS?
0
Accurate RMS voltage measurement of DC with RF ripple
1
Measuring True-RMS voltage of different waveforms - error?
0
Confused on when to use RMS current or voltage in calculations (regarding rectifiers)