Is it safe to use a Li-ion battery after being completely discharged?

I've got a Li-ion battery (LGDBHE21865 Q153F022A2) that has no protection circuits (as far as I know). The battery can support a 20 A current. I used it in my vape device some time in the past, but then the battery was lying on the shelf for a long time and it has discharged to approximately 0 V (may be ~0.5 V). I charged the battery (using a charger with about 0.5-1 A current; the charger has a special signal when a battery is completely charged) and set it up into my vape again. Device shows 100% battery level even after 10 minutes of intermittently using at ~35 W. 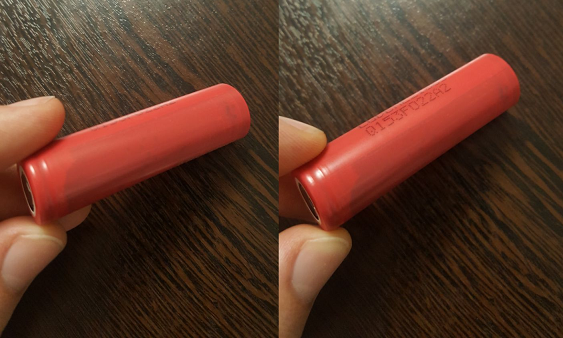 No, it is not safe to use, and you should discontinue use of that cell immediately and store it in a fire-proof container.

Any Li-ion cell of that chemistry is destroyed if it is discharged below 2 V, and most certainly to 0 V.

The reason for this has nothing to do with if it charges fine or not. The reason is that once the cell drops below 2 V, metallic dendrites begin to form inside the cell. Think of them as tiny, crystalline spikes.

When you charge the cell, lithium ions physically move from the cathode and intercalate (wedge themselves in between) the atoms of the graphite anode. This causes the anode to measurably increase in size slightly, which pushes the metal dendrites into the membrane separating the cathode and anode.

Eventually, the membrane will rupture by this repeated mechanical damage from the dendrites being forced into the membrane each charging cycle. This causes a dead short inside the cell, and it will vent (explode) and ignite the flammable electrolyte inside it, resulting in a chemical fire that is all but impervious to standard fire suppression systems and that only burns more vigorously when exposed to things like water.

When this actually occurs is unpredictable and does not necessarily occur during charging, but only sometime after. In other words, it could occur after you recharge it and slip it into your pocket or bag as you go out. There are plenty of videos of exactly this occurring to vape users and I am sure a fair portion of these accidents (which always seem to occur when the vape is not in use - which means overcharging or using after overdischarging) are the result of people doing exactly what you seem to want to do - continue to use an overdischarged battery, thinking it was safe to use or otherwise ok simply because it seemed to charge and have most of its capacity. Neither of those things are useful metrics and that cell is now dangerous, especially in the charged state, and you have no way of knowing when it will fail (spectacularly).

Vaping is an application that typically requires unprotected cells due to the high currents required, currents that are difficult to make protection circuits in such a small size that can handle those currents. This is why vapes typically use unprotected cells.

There is nothing wrong with this, and it is not a problem unique to the vaping community. I myself have unprotected 26650 cells in some LED flashlights with "enthusiast" levels of brightness that require unprotected cells due to current draw as well.

But without protection circuits, it does require the users to observe and respect the same safety limitations that would otherwise be imposed by a protection circuit. Do your due diligence and it is no problem. Stay safe!