Soldered test point on production board?

I understand having test points on a production board, but what would be the point of selectively soldering some of them? It doesn't modify any resistance, right?

I assume that the large numbers of potentiometers ("Voltage Regulators") are for ensuring precise final voltages more cheaply than precision resistors? Curious if I'm wrong though.

Taken from the faceplate LCD driver for a car stereo system. 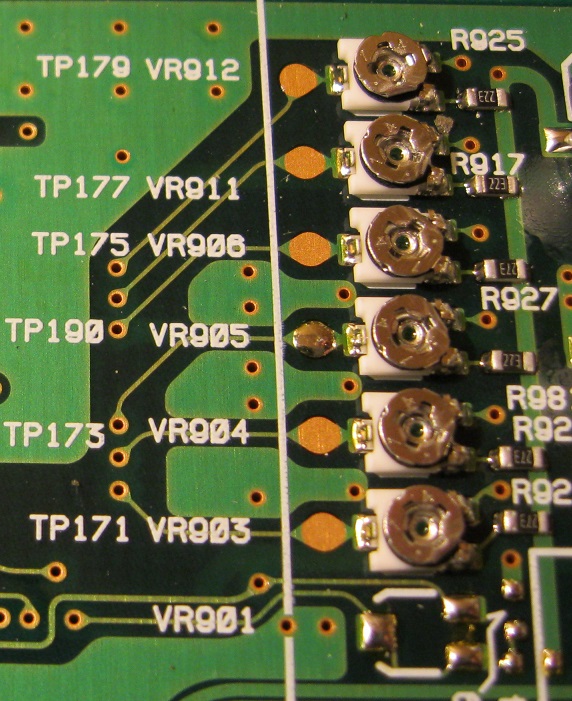 It looks intentional, either from the solder paste stencil or by hand at some point afterward. I doubt we will be able to figure out why it was done.

Adjustment can compensate for variations in several different components at once, and sometimes do a better job of it, so I suspect if they could have just used 1% or 0.5% resistors and gotten acceptable performance then they would have.

Modern designs often use EEPROM storage to save calibration settings, but usually there is a compromise involved (for example you might lose 20-30% of dynamic range to ensure that all units can be trimmed in despite production spread) and there is the possibility of memory corruption "bricking" the device.

Trimmers can drift, but if the circuit is well-designed and the adjustment range is no more than necessary that is not usually an issue, assuming screwdrivers are not involved.

Yes, there is no point of soldering these test-points. As the name suggests it serves the purpose of diagnosing the P.C.B. Also these test points have a routing present with the other sections of the circuit so soldering doesn't form any electrical connection.

The Soldermask between the adjacent pad and the test point is very small. Small enough that excess solder paste or a slight defect or lift of the stencil would cause solder to be deposited there during normal process from time to time.

For example, it could indicate the stencil is worn.

But this is pure speculation. There could easily be another , just as inconsequential reason.

Not the answer you're looking for? Browse other questions tagged potentiometer test production-testing or ask your own question.

0
Ideal serial communications test?
12
Production testing, design-for-test, test points, and other techniques
2
Embedded board level functional test at factory
2
Pogo Pins for 1.5mm Pitch Test Fixture
1
CPU and Memory Burn-in during production
3
How do you test SMD ICs that are not soldered to a PCB?
0
Term for pcb test fixture that can access both sides of the board
6
How to program MCUs and test PCBs in mass production?