Why only common collector method is used in class AB amplifiers?

Schematic i find everywhere in internet... 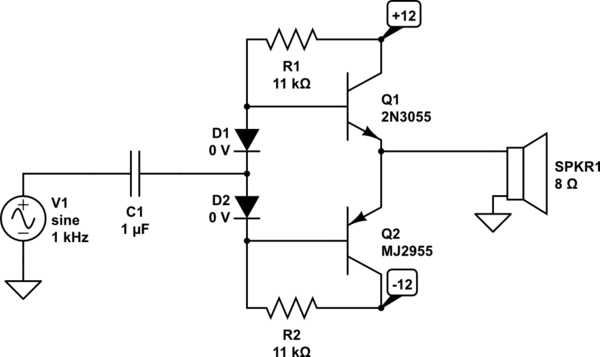 But i eager whether the circuit can be used in common emitter mode, so i have drawn my own circuit below , in which, everything is same but the connection of the transistors. I dont know whether my made circuit will work or not, but i don't want any harms to happen while i am testing the circuit so , i considered that it would be better if i ask this topic on stack exchange before implementing.

My drawn circuit below... 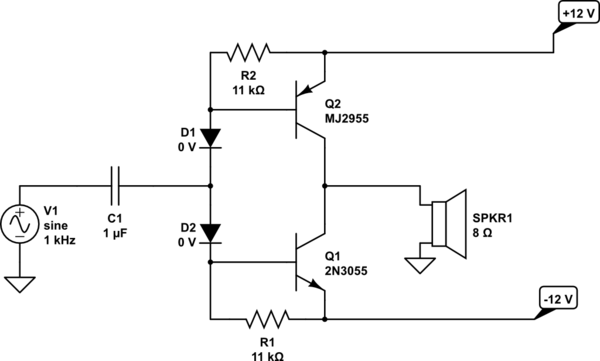 So here are my questions ...

Thank you so much !

The premise is false.

You can make class B or Class AB amplifiers without emitter followers; indeed that was the norm for at least the first thirty to forty years. 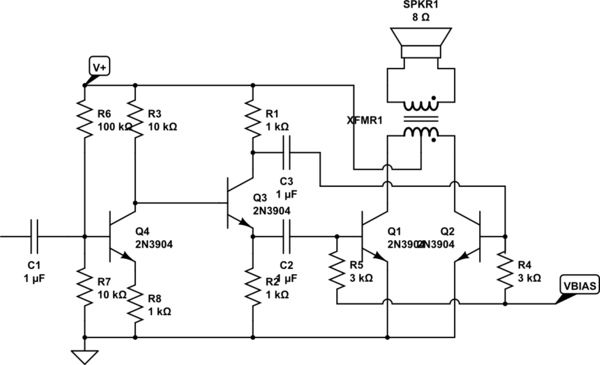 This is only a representative, with bias details and overall negative feedback omitted, but it is a classic example of a Class AB or Class B amplifier, depending on the voltage applied at Vbias.

Older engineers may laugh to see it drawn with transistors, but (a) Circuitlab, inexcusably, doesn't offer valves, and (b) this is actually the way early transistor amplifiers were built (usually with PNP transistors, since NPN Germanium transistors were rare beasts) when transistors were new and this topology was familiar. So you will find it in 1960s transistor radios, identifiable by the output transformer.

Q1 and Q2 are the output devices, both in common emitter configuration. (It would be common practice to add small emitter resistors for better current control, bypassed with large capacitors. This matches "automatic bias" in valve circuits, where Vbias would then be 0V). With Vbias up to 0.6V this is Class B, with some element of crossover distortion : above 0.7V it's into AB, and above 0.7V plus (Vin peak * Q4 gain) pure class A.

The reason this configuration fell into disuse is obvious : the output transformer. But feel free to invent transformerless configurations (perhaps based around full bridges) if you like; just don't blame us fi it turns out to be more difficult than at first glance.

The basic circuit configuration lives on where transformers are unavoidable; typically in cheap 12V to mains voltage inverters, with MOSFETs, and either square wave drive, or PWM drive to produce a "pure" sinewave.

A class B amplifier can provide high current gain along with unity voltage gain and very low output impedance thanks to the emitter-follower configuration, but it has poor distortion performance because of the unbiased transistors. It's ideal to drive low-impedance loads but still requires the input voltage's peak to be greater than VBE. That's why class B amplifiers have poor distortion performance.

Not the answer you're looking for? Browse other questions tagged amplifier class-ab or ask your own question.

2
npn transistor base current question
7
Why do we not care about matching the input impedance of non-RF amplifiers?
0
Should bias voltages still be in range without driver/output transistors?
0
Collector current for common-emitter audio amplifier
0
Why are all log amp examples with common base logging transistors?
0
Does Differential Amplifier Emitter behave as ground in AC-analysis?
6
Understanding class A amplifier waveforms
1
Common Collector Amplifier DC Analysis (why not get the VTH and RTH like in Thevenin's Theorem?)