Circuit analysis with an LED and a voltage divider

First, I know its not particularly useful to use a voltage divider for an LED, especially with such a big drop, but this circuit is for educational purposes particularly for voltage dividers. It hass been a couple years since I've had circuit analysis so I'm just refreshing myself.

I created this voltage divider circuit with an LED as the load. The top schematic is the calculated circuit, and the bottom is pure measurements. I find I get a big difference between the 2.

Besides that, my theory on the difference is that the voltage divider will normally end up with a Vout of 4.8V. However the LED has a forward voltage of around 2.84-2.94 V, this extra voltage has to go somewhere so the rest of the voltage will get dumped into R1, which of course will change everything.

Is this a correct assumption? In that case LEDs would be analyzed always as having there forward voltage drop over them (which depends on the current running through them), and calculations go from there (this would further reinforce the idea that voltage dividers are not ideal for LEDs.)

If that is the case, then I could (and probably should) add another resister in series with the LED to soak up the rest of the voltage and set my current correctly.

So to sum up, is my assumption of what's happening correct? If so, is this how it works with just LEDs, or how does actually using voltage dividers with a load work, as most articles only tell you about the voltage divider with no load? 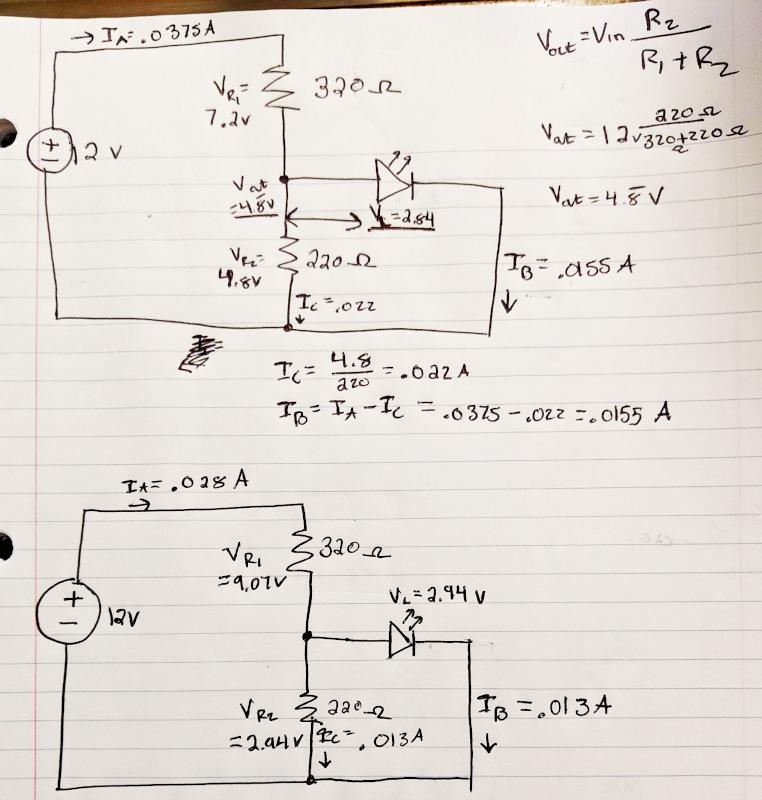 If you use that for your 20 milliampere rated LED, though, you will destroy the LED. You'd only have that relatively small top resistor between the LED and the 12V - the LED would get more than 200 milliamperes and promptly burn out.

In your circuit, the voltage at the junction of R1 and R2 will always be the forward voltage of the LED. 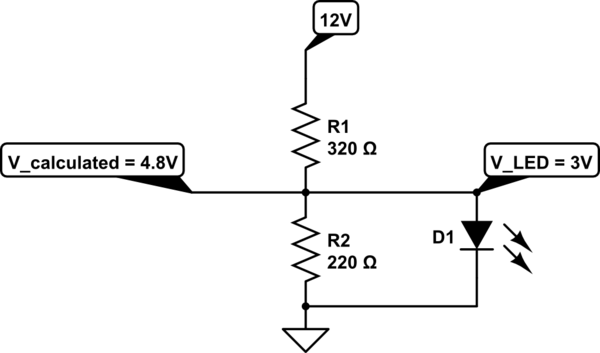 The voltage across the LED depends almost entirely on R1, which control the current to R2 and the LED. R2 reduces the current the LED a little.

If you build the circuit, you will never get the calculated voltage (from the voltage divider equations) across the LED. You will get a voltage that depends on the current through the LED, and the current to voltage curve of the LED (which you can find in the LED datasheet.)

A simple series resistor is all it takes to power an LED from a voltage source.

What you do is calculate a resistor value that will limit the current to the rated \$I_f\$ given your supply voltage (\$V_S\$.)

A typical blue LED has a forward voltage of about 3V at 20 milliamperes. You want to operate it from 12V.

There exactly one voltage that will develop at the junction of R1, R2, and the LED in steady state. The LED is a semiconductor (i.e. a non-linear device) which makes it complicated to reason about in analytically precise terms.

I would practically think about this circuit by omitting R2 initially and analyzing the circuit that way. In that light (pun intended), the circuit is a very basic LED circuit with a current limiting resistor. The effect of R2 is just placing an additional (wasteful) load on the power source, in my estimation. R1 is going to have very little, if any, effect on the operating point of the LED.

Well, let's make a mathematical closed solution. I know that this is maybe above the OP's knowledge, but I think it is important to show it in combination with the other answers given.

The Shockley diode equation, gives the relation between the voltage across and the current trough a diode:

Well, we are trying to analyze the following circuit: 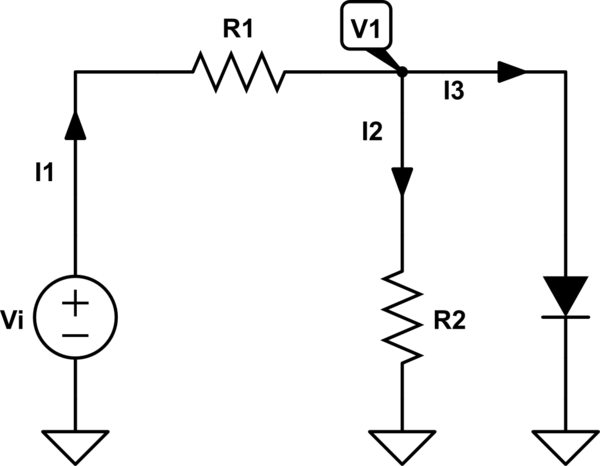 When we use and apply KCL, we can write the following set of equations:

When we use and apply Ohm's law, we can write the following set of equations:

Using the known values, we find:

I used Mathematica to find it, with the following code:

Divider. To understand what happens in this circuit of three elements, first of all, you have to have an idea about such fundamental electrical concepts as voltage divider and current divider.

Dynamic resistor. Then, you have to have an idea about ​​the diode behavior as a voltage-stable nonlinear element no matter what the specific diode is (LED, Zener, Si, Ge, etc.) You can achieve this in a very simple way by thinking of the diode as of a dynamic resistor. You can even mimic it by a humble variable resistor (rheostat) as I have explained in my answers to similar questions below:

Why does the voltage drop across an LED matter when determining an appropriate resistor value?

Zener diode can vary current flow to maintain voltage drop, how does this magic effect work?

Why does voltage drop in a simple zener diode based voltage regulator?

What is the main difference between a zener diode and normal diode?

Understanding why not to use a resistor for multiple LEDs

What are the disadvantages of using a Zener diode over a linear voltage regulator?

The operation of the circuit of a resistor and diode in series can be graphically illustrated by superimposing the IV curves of the two elements (the so-called "load line" technique). 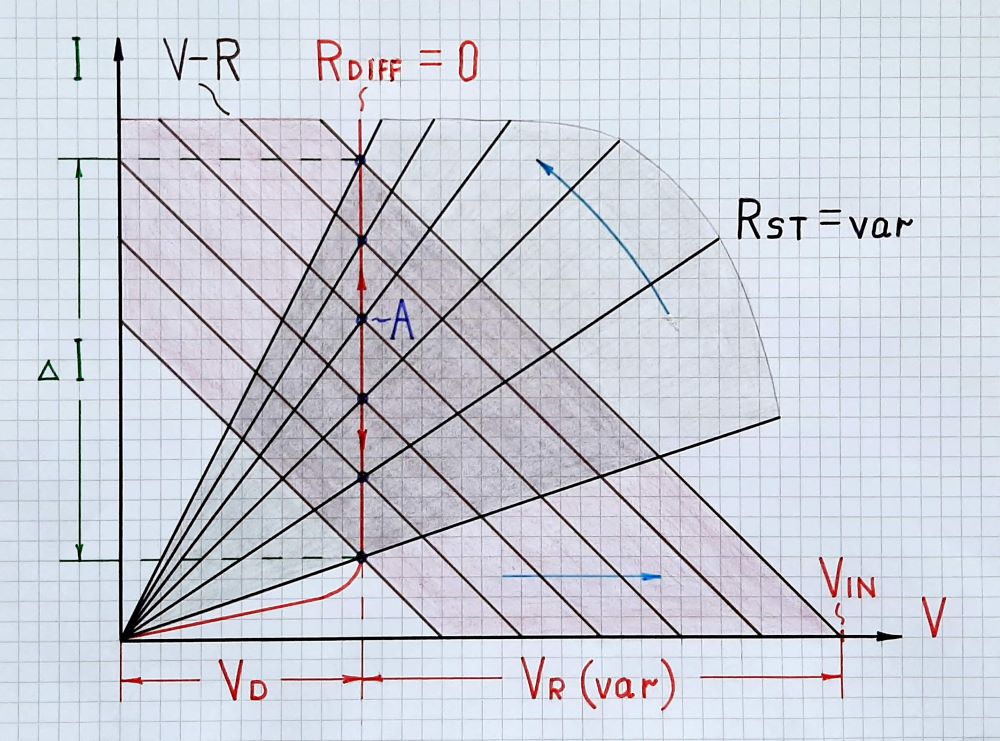 I have added the IV curve of the variable resistor to show the mechanism of the dynamic resistance (see my explanations in the links above).

This graphical representation can be even used for calculation (and it was widely used in the past since the analysis of such non-linear circuits is complicated).

When another resistor R2 is connected in parallel to the diode (voltage divider), we have to combine two IV curves - R2||LED or R1||R2 (Thevenin).

In the answers and comments here it was convincingly shown that the voltage divider should not be used to supply diodes (LED). However, there are cases when this is desired. Here are some of them.

1. For example, in an LED threshold voltage indicator, we want the LED to light up at some voltage value. In this case, the voltage divider will help to adjust the threshold (the single resistor cannot). Let's consider the circuit operation when the input voltage increases from zero to maximum.

2. Another example is an LED connected to the collector of a transistor. We don't want it to glow when the transistor is off ... but it may glow dimly due to the small residual current of the transistor. Then it helps to connect a resistor in parallel with the LED. This is what I had to do years ago when I demonstrated to my students the idea of ​​a transistor latch.

3. The same problem arises when we want to turn off a BJT by interrupting its base current. Then we have to connect a resistor in parallel to the base-emitter junction. See the explanations in my answer to a related question.

4. In a common-emitter amplifier stage, they prefer to bias the base-emitter junction by a voltage divider (by voltage) than by a single base resistor (by current). Thus the bias voltage is less affected by the temperature; so the operating point is more stable.

Not the answer you're looking for? Browse other questions tagged led circuit-analysis voltage-divider or ask your own question.

10
Understanding why not to use a resistor for multiple LEDs
7
What are the disadvantages of using a Zener diode over a linear voltage regulator?
5
How is a series resistor limiting the voltage for a diode?
6
Why does voltage drop in a simple zener diode based voltage regulator?
3
Art of Electronics - Zener Diode Example
3
Zener diode can vary current flow to maintain voltage drop, how does this magic effect work?
2
Why does the voltage drop across an LED matter when determining an appropriate resistor value?
0
Trying to understand how this PNP works
-2
What is the main difference between a zener diode and normal diode?