How is a memory location accessed by random access?

This is a comment that I saw in another forum:

Like any other memory storage, it's divided into smaller units. These units can contain data individually or can be treated as a big single block of memory. So suppose your RAM is divided into 512 individual blocks. You need to access the 199th block. So a sequential approach is to start from one end of the memory and move towards the desired block. So if you started at the 1st block, you need to pass through 1,2,3,4,5,……,197,198 blocks before reaching the desired block no. 199. But Random Access means that instead of passing through all the blocks present between you and the destination, You can directly access the desired block. Thus the time required to read any particular block remains constant regard less of its number, that is its relative position in the chip. Hence, you can access any block in same amount of time as any other block. For example, you can access any of the 512 blocks in exactly same amount of time.

So, starting from that statement, I would like to know exactly how the RAM locates, for example, position 1000 (or any 'position X' that the CPU has indicated) in the same time that it can locate position 1.

I imagine it as a matrix but I can't figure out how it can access exactly to position 1000 without having to go through the other positions. How is this position calculated exactly?

In conclusion, I would like to know how to directly access a memory location without going through the other locations.

Thank you very much in advance.

The diagram alludes to some additional logic such as read/write (to tell whether to put data out on the address lines or to write the contents of the address lines into that memory row) and "chip select" which would be used when more than one memory chip is used.

I imagine it as a matrix but I can't figure out how it can access exactly to position 1000 without having to go through the other positions. How is this position calculated exactly?

The position isn't calculated. It is selected. In your example of reading address 1000 you will need at least a 10-bit address bus (which gives 210 = 1024 addresses). 100010 = 11111010002 so the address lines would be set to that binary address, the address decoder will immediately select row 1000 and put the data out on the data bus. Any address can be read at the same speed. (High addresses do not take longer to access or read.) 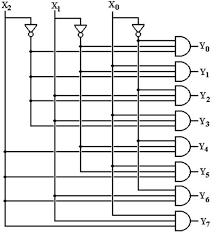 Figure 2. A 3-to-8 decoder enables the output (Y) selected by the binary address code (X0 to X2). The logic is arranged so that only one output is on for any input combination. Image source: Codestall.

RAM is effectively stored as a 2-dimensional array. Each row in the array would be one address, each column would be one bit of the required word (modern microprocessors may be able to read 8, 16, 32 or 64 bit words at a time).

I just want to supplement the great answers explaining how RAM is addressed by the fact that the expression RAM is more a relic of older times. Today almost all memory we use behaves like RAM, at least all solid state memory (flash memory in your SSD, for example, is addressed pretty much the same as your actual RAM).

The term comes from times with magnetic tape storage (similar to the old audio tapes). You application code started at the beginning of the tape. As long as you just read the code consecutively the tape can uniformly move forward and access time is constant. But if you want to jump to another part of the memory (e.g. to call a function or read some data) the tape had to fast forward to that point and skim over all the other data in between these two locations on the tape.
In comparison to that, the term RAM actually makes a lot of sense. The address decoding and accessing via a matrix-structure of modern memory makes it pretty much constant access time, regardless of which block you want to read or write.

Magnetic hard drives (HDDs) as we still use them as mass storage behave like something in between. When accessing another sector the read/write head has to physically move to the new position. A sector nearer the current position is accessed a bit faster than a sector further away, but the read/write head does not have to skim over all memory sections in between.

RAM (Random Access Memory) fully decodes the address to select one data unit (word) from the data array, using multiplexer and demultiplexer logic to steer the data path to the right word. RAM has an address granularity of one data word. True RAM has the lowest possible latency and least amount of overhead per access.

The exact structure of the RAM will depend on its size, with simple RAMs using a straight address-to-word decode into a linear storage array, while larger RAMs will use multiple arrays in compound 2-d arrangements designed to minimize logic, improve speed, and improve scalability through using pre-defined RAM arrays.

This differs from block or sequential memories, that work with larger data units and/or don’t fully decode the address. With these types of memory, you will have to shuffle through some larger chunk of data to ultimately get to the word you need.

DRAM for example isn’t truly random, but is block-oriented. These blocks are called rows, which in turn are buffered into columns by a local on-chip RAM. DRAM data I/O occurs in bursts of 4 to 8 words depending on the DRAM type, using the column index as the starting point into the embedded column RAM.

Flash memory is block-oriented internally, and has a minimum access unit of one block (128KB typically.) Like DRAM, Flash uses RAM to buffer I/O transactions, and there’s an even bigger penalty crossing from block to block than DRAM.

An example of a sequential memory is the hard disk. Data are transferred to or from the platters in order, and - you guessed it - buffered into blocks using RAM as part of the controller. Hard disk block size is somewhat arbitrary, depending on the RAM size and how the controller is set up to use it; 512 bytes and 4K bytes are typical.

The hard disk’s non-sequential access overhead is much bigger than for Flash or DRAM (many milliseconds vs. micro- or nanoseconds for Flash or DRAM), owing to both the rotational latency and track-to-track latency. So the host goes to great pains to optimize disk I/O to avoid moving the head (that is, avoid seek operations) and thus keep the I/O operations (IOPs) rate as high as possible.

And finally, we come to a surviving example of truly sequential memory: tape. Tape data are accessed in a strictly linear fashion, and the penalty for non-sequential access can be extreme: many, many seconds if a long seek is needed. If the data are spread across multiple physical tapes (volumes) that seek penalty can be half a minute to multiple minutes. Tape accesses are buffered using disk, flash or DRAM to hide some of this overhead.

In the past there were shift-in / shift-out type memories where you had to wait for your data to 'come around'. Some famous ones include mercury delay lines (1950s) and Intel's abortive 'bubble' memory (1970s) that, in their era, offered better density than contemporary RAM, but had a sequential, shift-in shift-out access model. Neither lasted very long, as RAM, DRAM and disk rapidly became more cost-effective and convenient to use.

1
Accessing RAM instance from multiple modules in Verilog
10
FPGA link to external memory
5
Is this BRAM being fully utilized if I use a different data width?
5
Replacing Pseudo-SRAM with SRAM
0
What to call the cells of memory in a computer or a microcontroller?
1
how to access the same RAM module from different modules?
2
Are SSDs true random-access devices?
3
How can multiple ICs access shared RAM?
3
How can memories be implemented efficiently with memory blocks of different sizes?