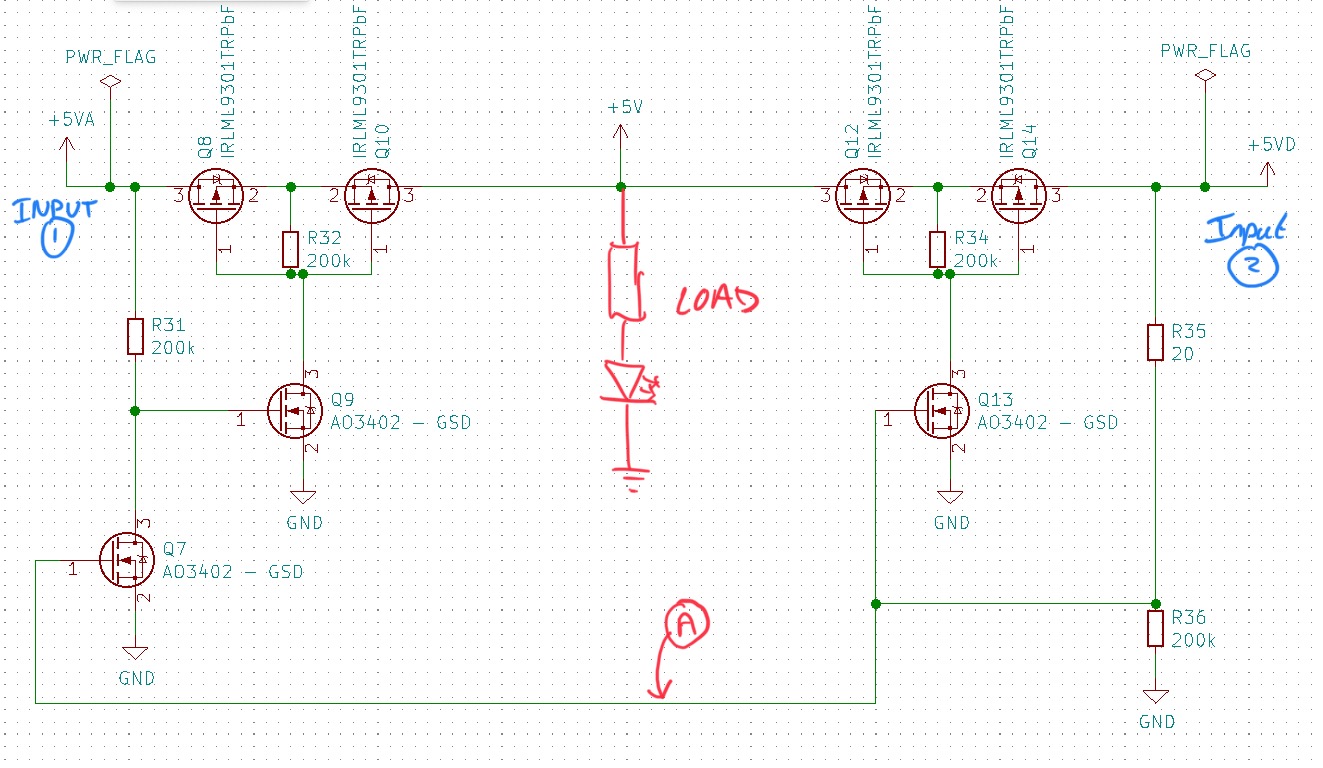 I have build the above circuit on a breadboard and it is almost working but not quite. I've spent a number of hours on the problem to no avail. My background is not electrical but I've been building projects and circuit boards using arduinos, esp8266 and esp32 for a number of years. This is my first ever post....

The problem I'm trying to solve is negotiating two possible power supplies for the PCB, input 1 from linear regulator and input 2 from the USB bus. I do not want the USB bus providing power to the regulator as it currently does which back powers the 12V supply. I realise I could use diodes to achieve this, but I would like to get this to work!

I'm using LEDs at input 1 and 2 to confirm which power source is active.

If I only connect power to input 1 then load lights up and the LED at input 2 does not : intended behaviour.

If I only connect power to input 2 then load lights up and LED at input 1 does not: intended behaviour.

In reality power is likely to be supplied at input 1, then power supplied by input 2 and I want input 1 to be disconnected. This appears to happen. However then, when I disconnect power from input 2 leaving power on input 1, load does not light up: not intended behaviour.

I would like input 1 to be passed through to the load when input 2 is disconnected. If I measure the voltage at A it reads 0.8V which is enough to keep the logic level AO3402 on. If I then connect input 2 directly to ground, forcing the gates of Q7 and Q13 to 0V, the load lights up.

I am uncertain as to why the gates are kept at 0.8V. I have tried a lower value pull down at R36 but this does not work.

Any ideas appreciated, or different approaches also welcome. I do realise the two diodes would achieve the same result, but there may be significant power draw so I would like efficiency to be good.

As you have already determined, your circuit relies on the Q13 and Q7 turning completely off. However, you are stable in a state where there is a low current flowing through Q8, Q10, Q12, and Q14 sufficient to provide 0.8 volts on R36.

One way to solve this problem would be to make the connection at input 2 in such a way that it disconnects the connection between Q14 and R20 whenever you disconnect input 2. Then, point A will be pulled to ground and all will be well.

Not the answer you're looking for? Browse other questions tagged switches high-side p-channel or ask your own question.