Is reactive power periodic in nature? What is the exact difference between active power, average power, and real power?

Consider an RC circuit which is supplied by a sine source

The current through the circuit will be

The instantaneous power equation is

Clearly from this image we can see that the power equation has some frequency component also.

The average of this instantaneous equation over one cycle will give us average power.

Are real power, active power and average power the one and the same same?

If they are not, then we don't see text books mentioning this high frequency component in the real power/active power/reactive power.

They directly give the average value as zero frequency component. This reactive power that is mentioned here always has only a high frequency component here. In the case of power systems, if we are speaking about reactive power are we just speaking about the peak reactive load demands and quantifying it for load flows and in case of real power in power system will we be speaking only about average value of real power load demands and proceeding with the load flow?

I lose clarity here and I am sure that I am wrong at some basic point. I would be grateful if someone is able to clarify this.

What is the exact difference between active power, average power, and real power? 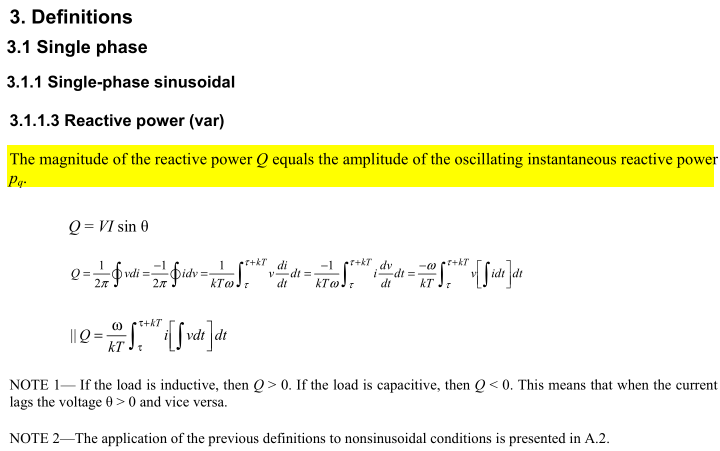 Is reactive power periodic in nature?

Reactive power? Not in time. Reactive power is a constant. If something is periodic in time, it must be variable in time. A constant is independent of time.

Edit as per comments from OP

In a two-terminal device or network operating in sinusoidal steady-state, the following is true:

And why don't we define (the absolute value of) reactive power as the time average of instantaneous reactive power? Because it'd be zero, which isn't useful; in fact, we also use amplitude (or RMS/effective value) for sinusoidal voltages and currents, since their average is zero (assuming the DC offset is also zero).

and for a linear time-invariant RC network also excited by a sinusoidal voltage and operating in (sinusoidal) steady-state:

Are real power, active power and average power the one and the same same?

Therefore: active power == real power and they refer to a specific type of power, while the average is the mathematical average performed on any quantity. No averaging means instantaneous.

We certainly do, since it's part of the very nature of the multiplication: there are two sines, multiplied, which gives the trigonometric equivalent of \$\cos(2\omega)\$. But the average of it is a fixed, non-oscillating value.

They directly say that the [???] and they directly give only the average value as real/active/average power.

It seems you missed a few words ther, but even so, the part where "they" give only the average values is the part where only those matter for the counter, or for load-flow analysis. Remember that the counter performs an averaging in time. The result at the end comes out a fixed number.

You are misleading yourself by not continuing the derivation:

Now you can see that there is a fixed value, \$\cos(\theta)\$, and an oscillating value at twice the frequency, which is naturally occuring when two sines are multiplied. The fixed value is nothing but the average. Since the cosine is an even function, the average is never negative, while the oscillating part never goes beyond twice the amplitude.

Remember that the total power, S, is made of both active, P, and reactive, Q, powers, and their relation is orthogonal: \$S=\sqrt{P^2+Q^2}\$. And S is calculated based on the RMS values of the voltage and current. This means that no matter what displacement exists, the RMS values will be divided by \$\sqrt2\$, and their multiplication will always be one half of the peak values. The instantaneous values will have a frequency twice the fundamental, and its peaks will never be more than twice the \$\bar S\$. For example, if V=3 and I=2, S=3 and the peak will never be above or below ±6. Here shown for an angle varying from 0 (blue) to π/[2,3,4,6 (red)]): 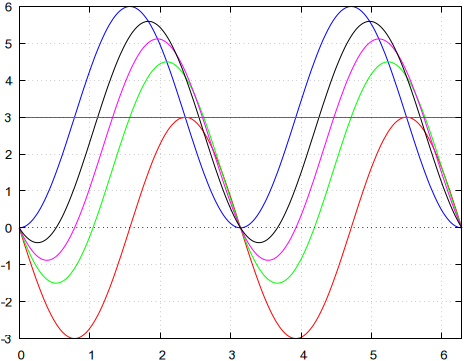 The load-flow assumes a behaviour in time, so the instantaneous values make little sense here. Therefore the only quantities of interest are magnitude and phase, which give the relevant average values.

As a final note, when talking about systems with harmoncs, the same reasoning as above can be used. For instantaneous values the displacement is now relevant only to one harmonic, and the total harmonic distortion (THD) takes place for the overall effect, while for a load-flow analysis, the same averages in time are done with the help of square-root sums of powers.

Not the answer you're looking for? Browse other questions tagged power circuit-analysis circuit-theory reactive-power real-power or ask your own question.

1
Why is apparent power more important\relevant than maximum instantaneous power?