I will certainly measure 1 V at the output but conceptually that doesn't feel right...

If no current passes through \$ R_f \$, the feedback loop is essentially an open circuit (circuit B). If the feedback is open, there is no feedback and the circuit is simply an open loop op-amp (circuit C): if both inputs in circuit C is 1 V, there is no potential between the inputs and the output must be \$ V_{out} = 0\,\text{V} \$! After all, an op amp by itself amplifies any potential difference with infinite gain and drives itself to saturation - but there is no potential difference, output should be zero.

There has to be something wrong in my thought process but I don't know where it is.

Since 1V has to appear at the inverting input...

the output Vout has to hold the same voltage as that appears on the inverting input: Vout=1V...

so there is no voltage drop across Ri and subsequently there cannot be any current through Rf either.

As you can see, I rearranged your (correct) thoughts and put together a sentence from them with a more correct causal relationship.

If no current passes through Rf, the feedback loop is essentially an open circuit (circuit B).

Your observations are very interesting (+1 for this "discovery"). Yes, this can be seen as a kind of "open circuit"... which we can call a "virtual open circuit". This circuit trick is known as "bootstrapping" and is believed to have been invented (in a non-electrical form) by Baron Munchausen several centuries ago:)

However, this "virtual open circuit" (or, as they say, "bootstrapped resistor") does not mean "broken circuit". The paradox of this phenomenon is that there is a resistor "bridge" between the two voltage sources... and it can be low resistive enough... but the input voltage source has the illusion that there is no connection between the sources. Thus, your Fig. C is not correct either...

We can summarize this wisdom in another "golden rule" for stopping the current in a circuit of a voltage source and resistor in series. So, we can stop the current in a branch of circuit in three possible ways:

I recommend you to visit an interesting Wikibooks circuit story that I created with my students in 2008. There we were exploring the same arrangement as yours - a resistor circuit (potentiometer) connected between two sources. 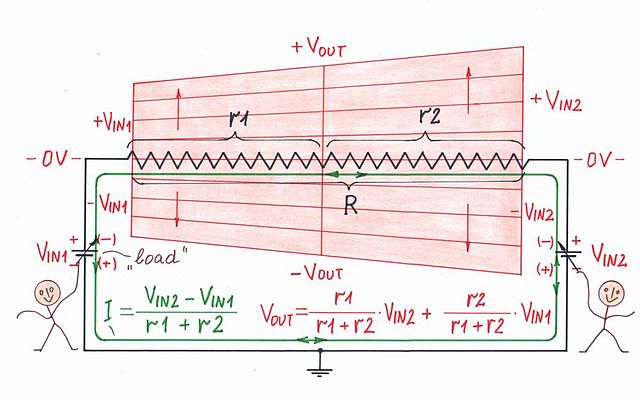 Here is a movie of a computerized experiment with the same arrangement (described in the story).

As you may have guessed, this is a great idea attributed to Miller.

Actually with finite gain [...] the argument would be even more compelling - finite open loop gain multiplied by zero potential must be zero!

I find it even more clear to see with finite gain. You are forcing only one input to 1V. The other depends on the voltage source and the op. amp. output for its voltage. If you break the negative feedback, you remove the mechanism that tries to "zero" the differential input voltage.

This circuit uses an op. amp. only with finite gain as a DC non ideal characteristic (in fact, a very small one, 1000, to make it even more clear): 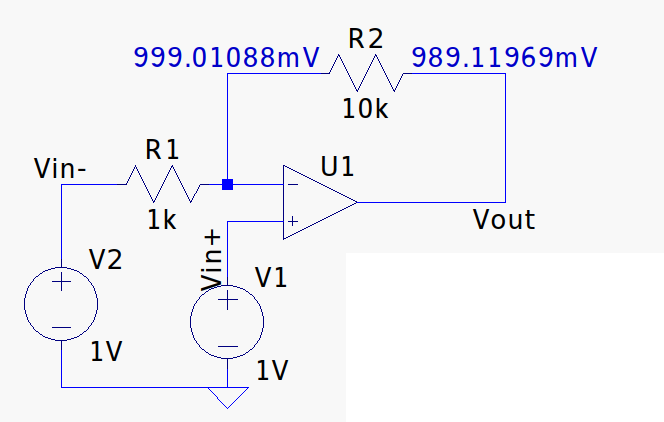 There is current through the resistors in this condition. 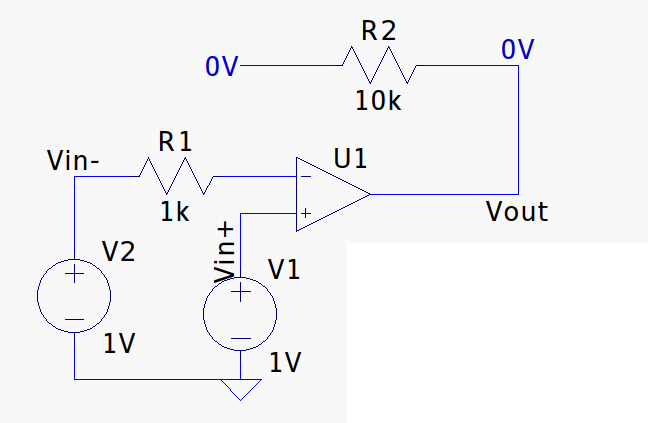 Trying to follow a thought process while multiplying \$0 \times \infty\$ is really a problem. As the open loop gain tends to infinity, the differential input voltage tends to zero (with negative feedback). The current through the resistors will tend to zero, but non-zero current means that \$ V_{in-}\$ > Input- pin \$> V_{out}\$. The two op. amp. pins will tend to the 1 V @ the non-inverting pin, but not together if the feedback resistor is non-zero.

Very short answer about the main point where your assumptions are wrong:

As a strong counter example consider a opamp voltage follower. If the inverting input is connected only to the opamp output and nowhere else (voltage follower), then the ideal opamp never has any feedback current but of course is in a closed loop with the output following input. A real opamp will have some feedback current though in this scenario.

If the inverting input is also used as an input (in addition to negative feedback), then many opamp configurations (ideal or real) will have one particular set of input voltages at which feedback current changes sign. But even this zero crossing does not imply an open loop.

Open-loop means that there is no causal dependence of any one input on the opamp output.

Not the answer you're looking for? Browse other questions tagged operational-amplifier common-mode negative-feedback or ask your own question.

2
Why is the input trigger pulse in a monostable multivibrator fed to the base of the transistors through a capacitor and not an inductor or resistor?

7
Opamp Inverting Amplifier: The case of non-inverting input not being connected to ground
0
Input impedence of Op-amp circuit
0
NTE941M non-inverting opamp has non-zero output with 0V input
0
Common Mode Voltage Range with Negative Feedback
5
How does the op-amp stabilize?
1
Why does an OpAmp with negative Feedback not amplify the potential difference on his inputs?
1
Current mirror with mosfets
0
Understanding Negative feedback loop circuit with an Ideal Op-Amp