In an astable multivibrator, why doesn't negative feedback prevent the output from ever saturating?

What I understand of an astable multivibrator so far is this: 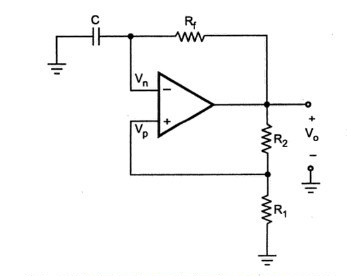 For example, if the output was initially at +Vsat, the capacitor would charge until it got to +beta * Vsat. Once it exceeded this upper threshold voltage, however, v- would be greater than v+, which would drive the op amp to negative saturation (-Vsat). The process would repeat as the capacitor discharges from +beta * Vsat to -beta * Vsat; beta here is R1/(R1+R2).

My question is as follows. During the portion of the time that |v-| > |v+| (either during capacitor charge or discharge), why is the negative feedback not coming into play and quickly equalizing the two voltages? Can we assume that the positive feedback of the schmitt trigger works faster than the negative feedback involving a resistor and a capacitor? Is there some sort of a "battle" between the two feedbacks and one ends up "winning" eventually?

The voltage at (-) terminal can rise and fall only at a speed with which the capacitor can charge/discharge. That rate is limited by the opamp saturation voltage and the resistor Rf. It has time constant Rf x C.

The positive feedback through the two resistors R1 and R2 are nearly instantaneous.

In the simplest analysis consider this: - 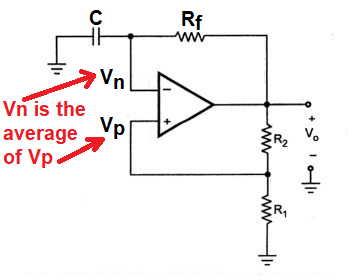 Vn is the average of Vp because Rf and C form a low pass filter.

Not until Vn catches up with Vp can negative feedback have any instantaneous effect. Then, when that occurs, the output flips and Vn is playing catch up with Vp once more but, with the polarities reversed.

Not the answer you're looking for? Browse other questions tagged operational-amplifier feedback schmitt-trigger multivibrator astable or ask your own question.