Capacitor Size for a DC motor. Do I even need one?

A couple months ago the AC motor on my wood lathe went out so, following a number of YouTube tutorials, I swapped it with a DC treadmill motor. On the surface everything seems fine and it works. The project got me interested in electronics again, so I've started taking online classes and trying to learn more. I've recently started learning about capacitors and inductors and it got me thinking about my lathe circuit. The circuit is very simple, it's basically a cheap SCR voltage controller ran into a bridge rectifier. The more I learn though, I'm thinking I might need to add a capacitor after the bridge rectifier to smooth the voltage to the motor. So my question is 2-fold. Do I need a capacitor and how would I calculate what size I need? The specs I have available for the motor are 2.25hp, 130V, 12.9A. The max I ever need to use it is maybe 80%, after that it's almost too fast to be useable. I've attached a rudimentary schematic of what I did below. 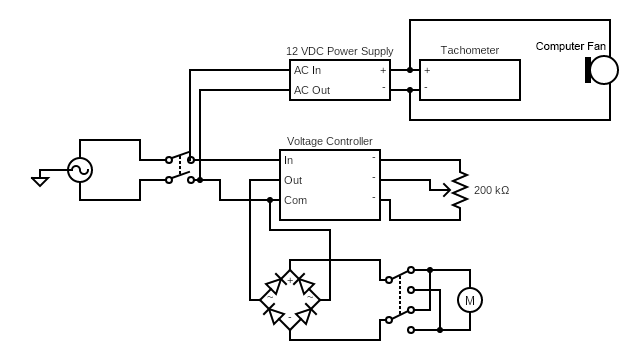 capacitor motor-controller
Share
Improve this question
asked May 1 at 17:09

If it's running OK then I wouldn't mess with it.

Your SCR control is most likely controlling voltage by changing the phase angle as shown in Figure 1. Adding any capacitance will tend to raise the DC after the bridge rectifier on longer than intended and would actually mess up the control depending on the amount of capacitance you add. In addition the SCR on turn-on would have to charge the capacitor on each half-cycle so it and the diodes would be stressed more.

Remember that the inertia of the motor is high enough that it doesn't respond in the < 10 ms half-wave (50 Hz) and it effectively smooths out the pulses of energy it receives giving a smooth rotation of the shaft.

The capacitor has nothing to do here, rather a large choke (inductor).if you want to smooth run. If you use a SCR, then also an EMI filter on the input side is needed.

Beside this, I would warn you about using cheap SCR rectifier, since it won't work for the DC motor. You need a controlled SCR rectifier made for controlling the DC motor and not a cheap lamp dimmer. Further the 4Q SCR control has everything, so you don't need an extra diode bridge and turnover switch as depicted.

A SCR rectifier has to be combined with a inductance, which you already have as motor inductance. The voltage can be smoothed with a capacitor only after the inductance - in your case impossible. The motor can exhibit torque ripple due to the current ripple and not due voltage ripple, so the capacitor is never needed. Right the opposite, if you want a very smooth current then you need to add yet another big choke.

Not the answer you're looking for? Browse other questions tagged capacitor motor-controller or ask your own question.

4
Controlling a Motor for test bench
5
Is a parallel capacitor needed in this application?
2
Decoupling issue with DC Motor?
3
How to construct this simple circuit properly?
1
Max size smoothing capacitor without melting the rectifier
0
DC Motor control setup and circuit design. 1.5Hp continuous duty @ 95v dc
3
Dimensioning smoothing capacitor for China DIY LED lamp
3
What capacitors are proper to use for input of AC DC converter?
0
Building a VFD for a split phase (capacitor run) motor?