I don't understand how this current limiter works [closed]

This circuit is supposed to be a current limiter but I don't understand why:

There is positive feedback between the output and the input, so you would expect the current and the voltage to start being increased until it is saturated.

No. But many of the three-terminal devices such as 78xx and LM317 type are similar. The circuit you have posted will not work as a current limiter but you may be thinking of this circuit:

Figure 1. Conversion of a voltage regulator to a current limiter is possible with the addition of R1.

Pay attention to decoupling capacitor values and placement in the datasheets. It is a common beginner's mistake to think they are "a nice to have". Without them the regulator may oscillate.

It depends on what U1 is.

If it's the classic LM317, then that part includes an internal current limiter, to protect itself. In fact, many (most?) three terminal regulators include some sort of limiter for protection against output short circuit or excessive load.

Note this limiter is only for protection, not accurate output current, so don't be surprised if it varies by a factor of 2 between different samples of the same part number, and varies with temperature.

As the current limit will usually result in device dissipation well above its free-air capability, you'll usually find the next stage of protection, shutdown, occurs fairly quickly if operated without a heatsink. The device then switches between full output current and shutdown, as it heats and cools, often a behaviour that's not wanted in a constant current source.

This is how an adjustable LDO with a constant 1.2V difference between Vout and Vadj is used to limit current to I.max = 1.2V/R with sufficient input voltage headroom and thermal calculations as well. 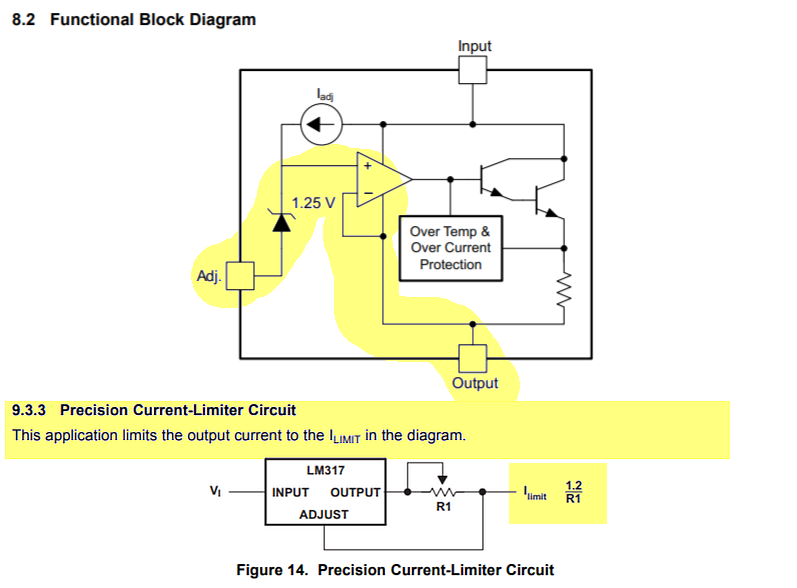 This is taken directly from the datasheet.

(Actually 1.25 V reference but differential amp may have some 50mV offset.) 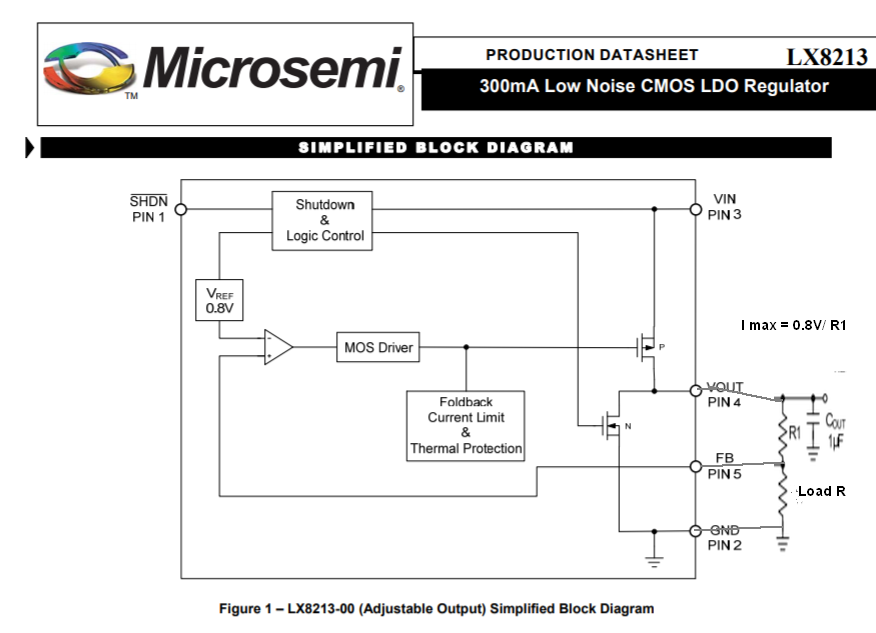 This CMOS LDO has much lower dropout, lower Vref = 0.8V and lower current rating (300 mA max) but in a small SOT-23 package.

So this is useful for choosing a simple linear current limiter.

Yes, all voltage regulators do the same - they keep their output voltage constant.

The negative feedback seems to have "reversed" the action of the resistor in the following way: The humble resistor with a resistance R causes the current I to "create" a voltage V = I.R across it; ie, it acts as a current-to-voltage converter. Now, with the help of the voltage regulator, the voltage V across it "creates" a current I = V/R; ie, it acts as the opposite voltage-to-current converter.

So, if we break the circuit in a suitable place (outside the area of the current sensing) and insert a load, it will be supplied with a constant current.

Thus the combination of a voltage regulator and constant resistor acts as a current source.

The idea. It is a more sophisticated circuit than the single current source; it is a combination of a voltage source and a current source.

I have considered this technique in my question and answer about the ingenious Widlar circuit solution.

What is the OP's circuit?

Obviously, OP means a current source made by a constant voltage regulator but he missed two things:

Not the answer you're looking for? Browse other questions tagged voltage-regulator current-source current-limiting negative-feedback or ask your own question.

1
What is the idea behind the ingenious Widlar current limiter?