For my master thesis, I am designing a wireless power transfer using magnetic resonance. For this purpose, I designed a full bridge inverter which is connected to an autotransformer whose output is rectified (this way I can gradually increase my DC input voltage).

The system works fine and I was able to transmit about 700 W during 30 minutes without any problems. Yet, when I increase my input voltage to a certain value (a bit less than 300 V), one leg of my bridge fails.

The right leg of the bridge works fine and keeps a nice 50% duty cycle, but the other leg shows the following features: 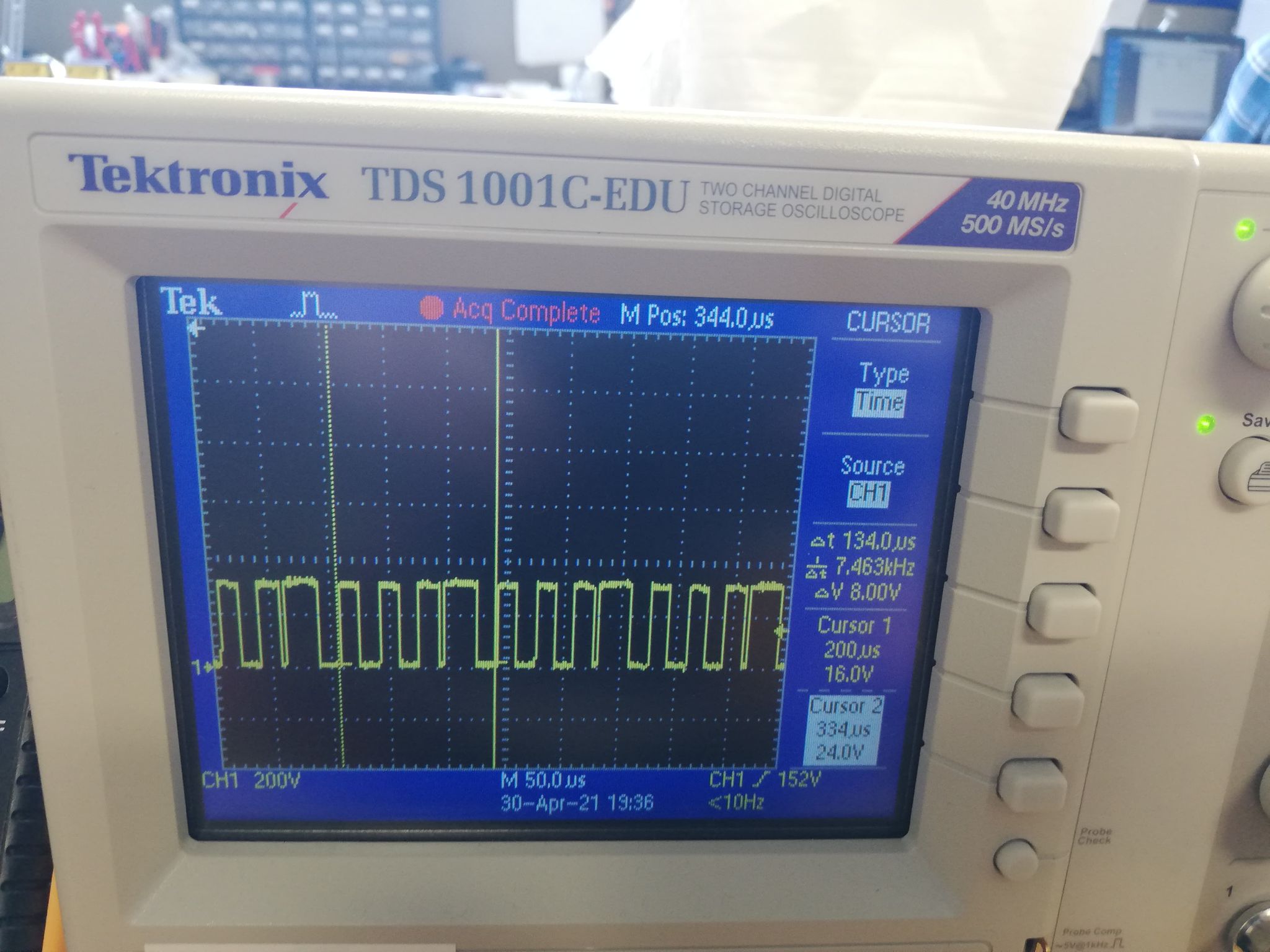 Figure 1: Vds of the TOP MOSFET of the failing leg 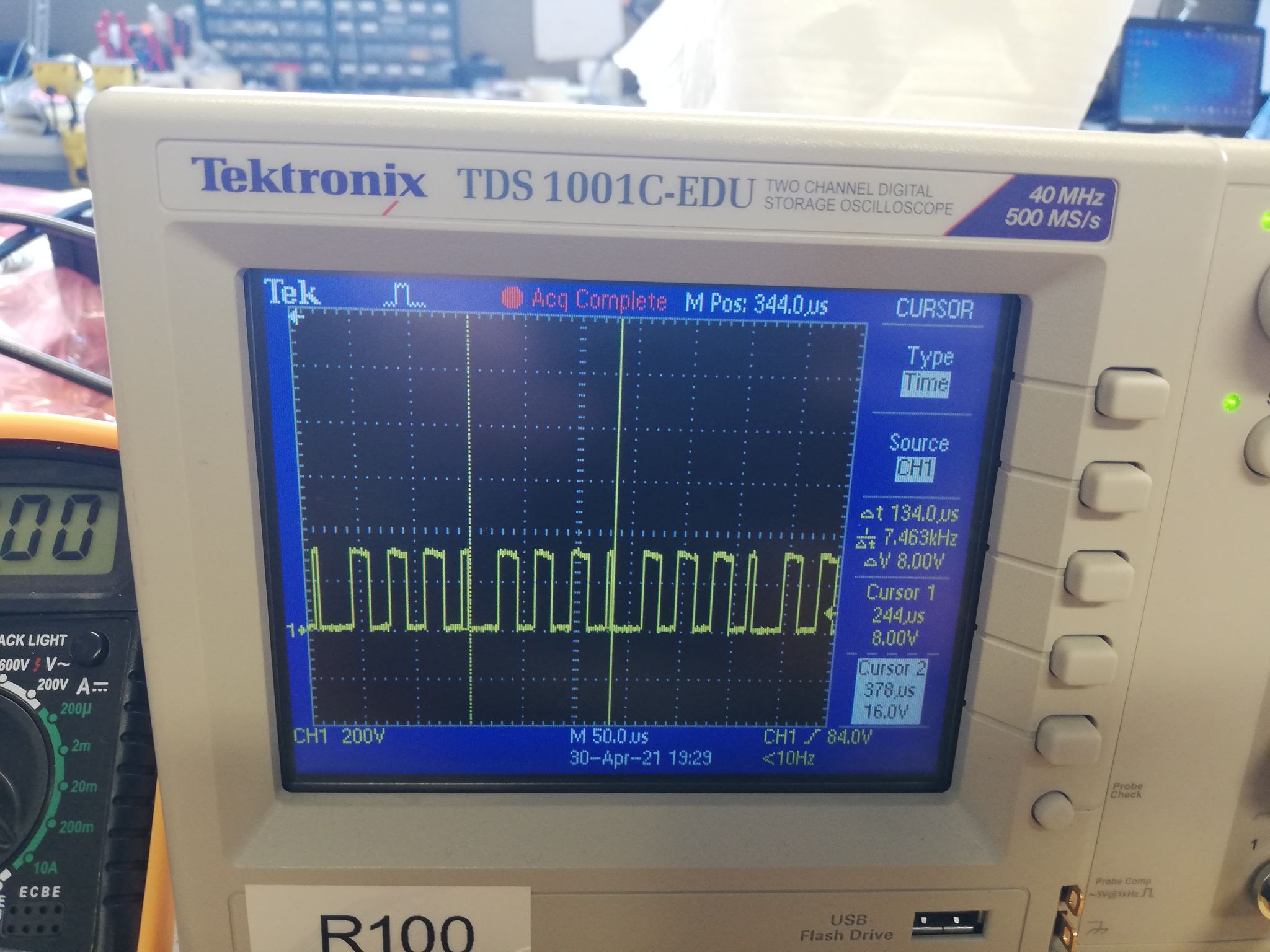 Figure 2: Vds of the BOTTOM MOSFET of the failing leg

On the second picture, one can see that the current keeps flowing via the bottom MOSFET when the top one fails (I think it flows through the body diode, because Vgs remains low during that moment).

The following picture shows a picture of Vgs of the failing MOSFET (the top one): 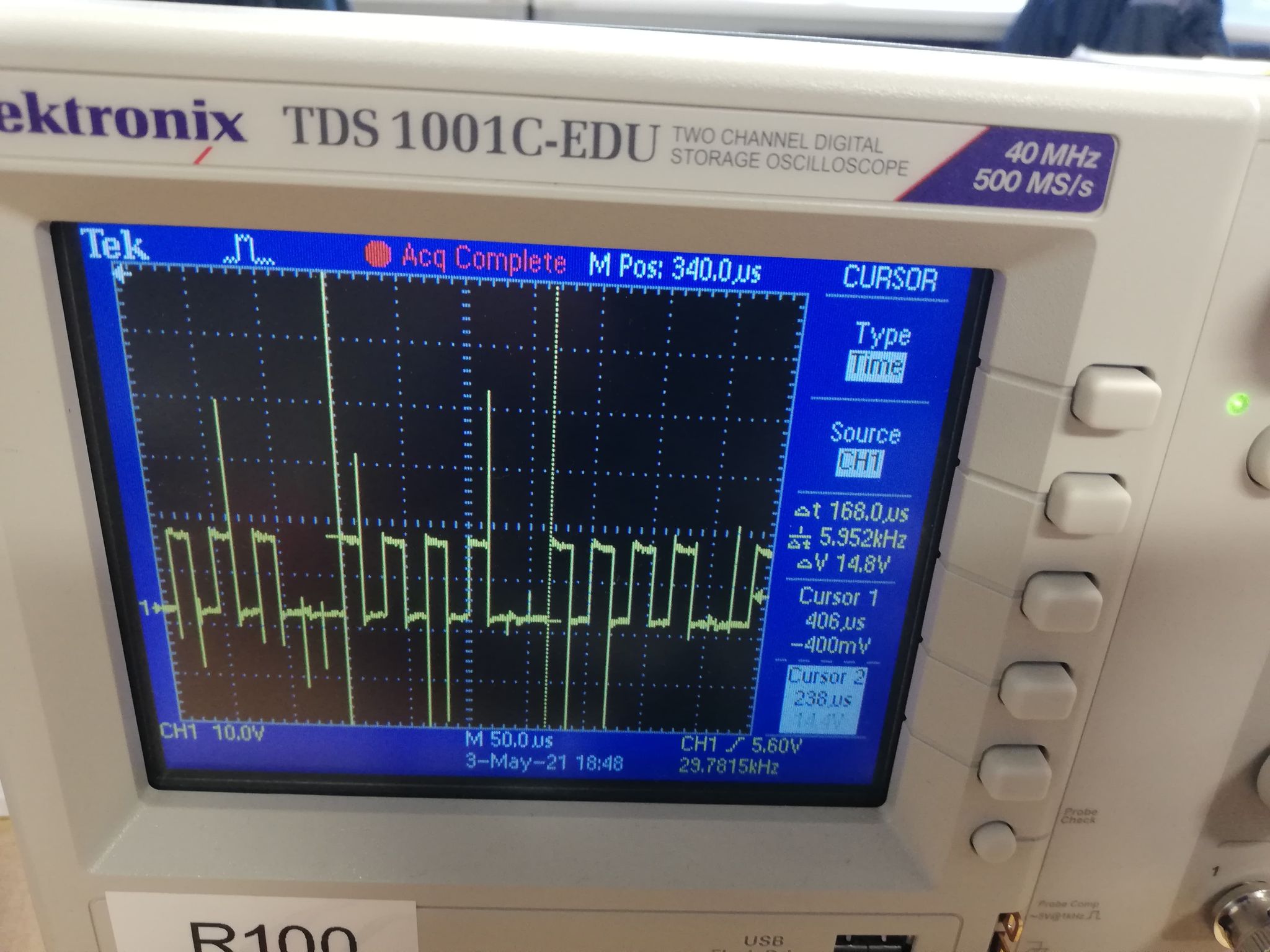 First, one can see that it is really spiky and not stable. I'm not sure whether this kind of behaviour is normal with a bootstrap system or not. Then, one can see that during the glitch, Vgs almost remains zero all the time.

It also seems that the measurement itself impacts the phenomenon, as it happens every 4 cycles when measuring Vds and is much less regular when measuring Vgs (it seems to be every 5 cycles on the picture, but it is not always the case though).

I also checked the control signals coming from my microcontroller. These stay 4 nice PWM signals as expected.

The following pictures may help you to better understand my layout. The first one shows the PCB itself, in case it might be linked to the layout: 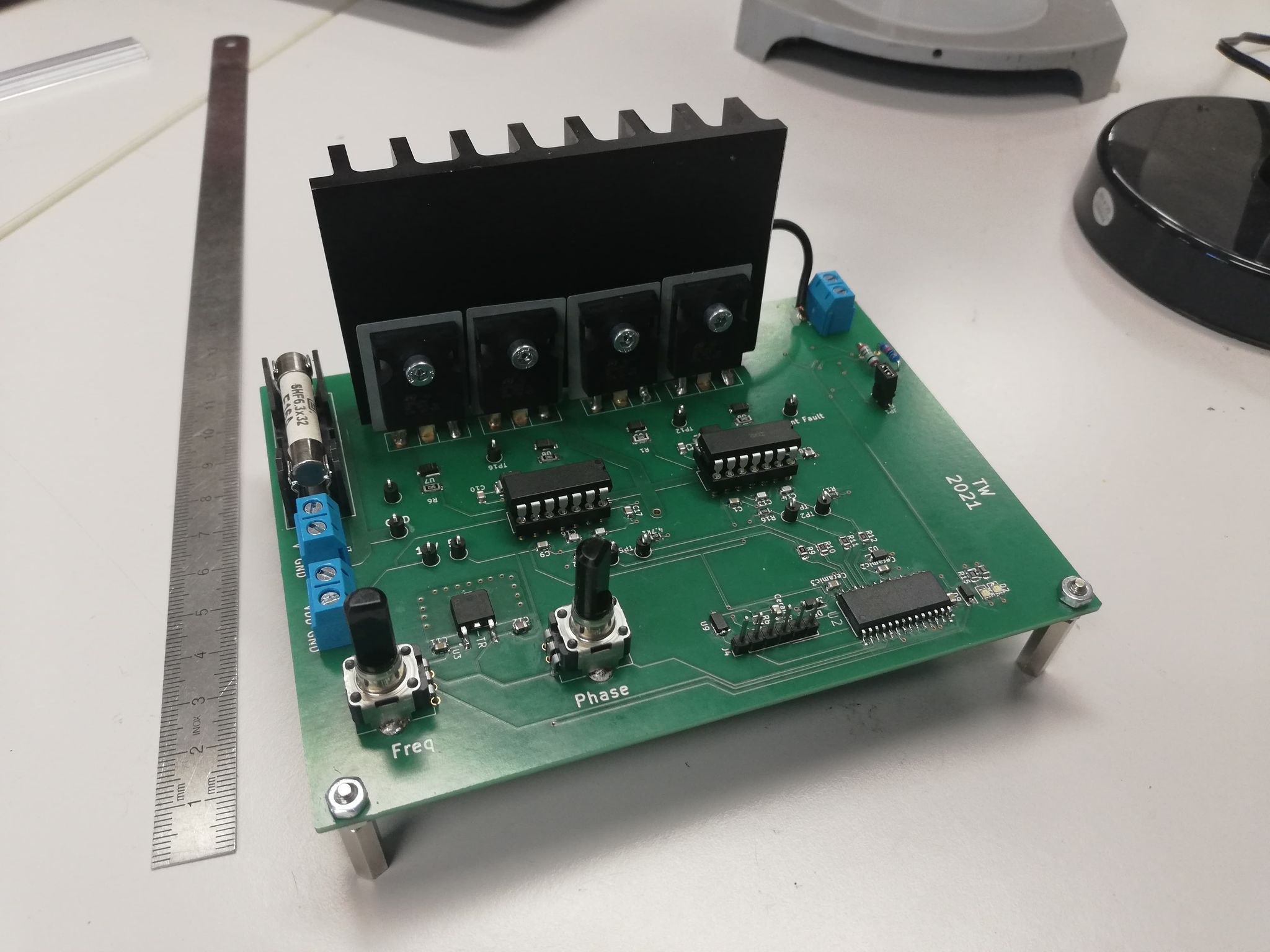 Figure 4: PCB of the inverter

Then the following two are diagrams of the circuit and the components that I used for the design.

The 100 ohm - 100 pF is used to filter out high frequency glitches at the output of the microcontroller and the 4.7 kohm resistor is a pull-down resistor to avoid short-circuiting the bridge at start-up.

[edit: I changed the following picture to remove the ambiguity on the capacitor value] 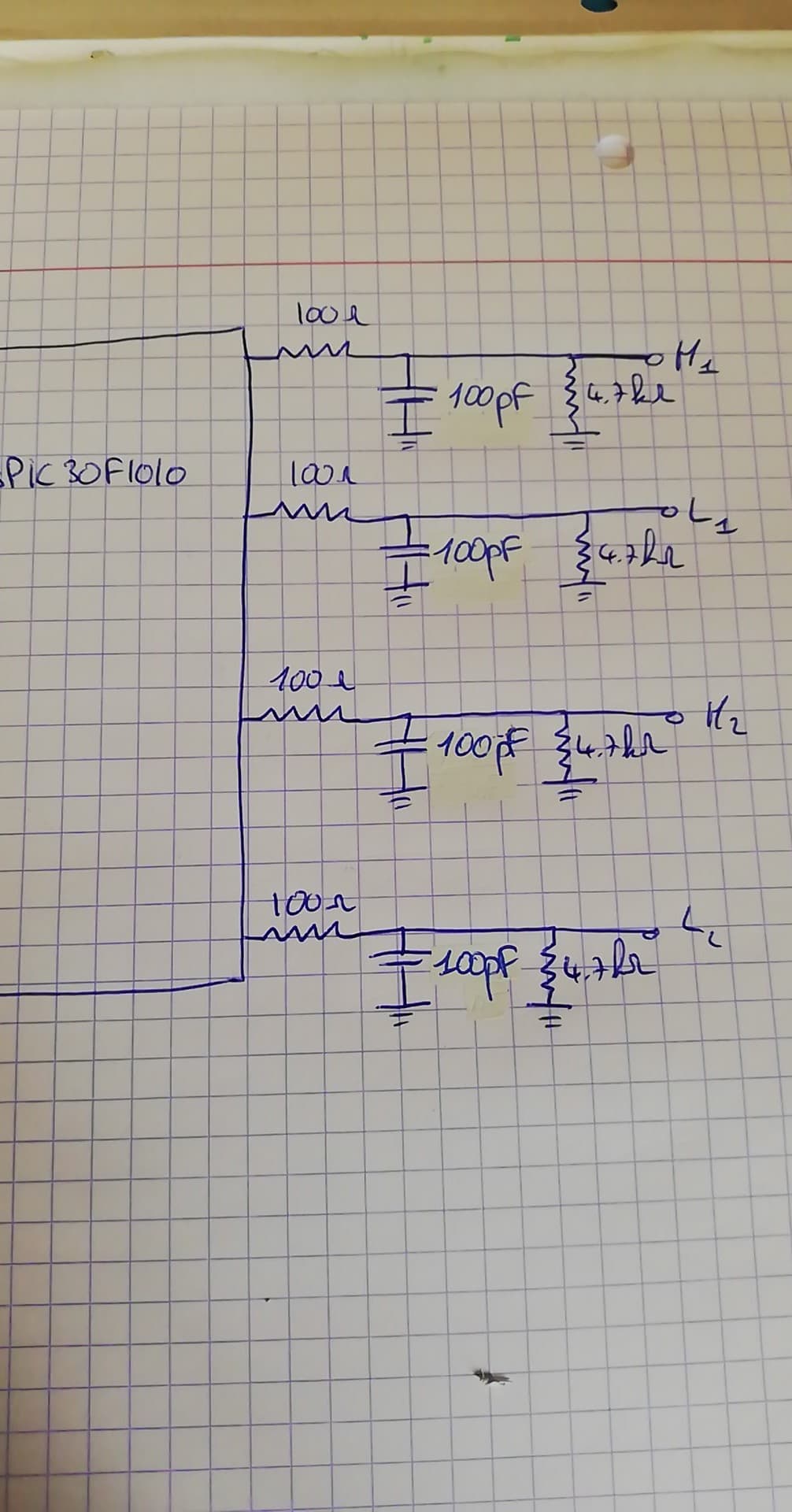 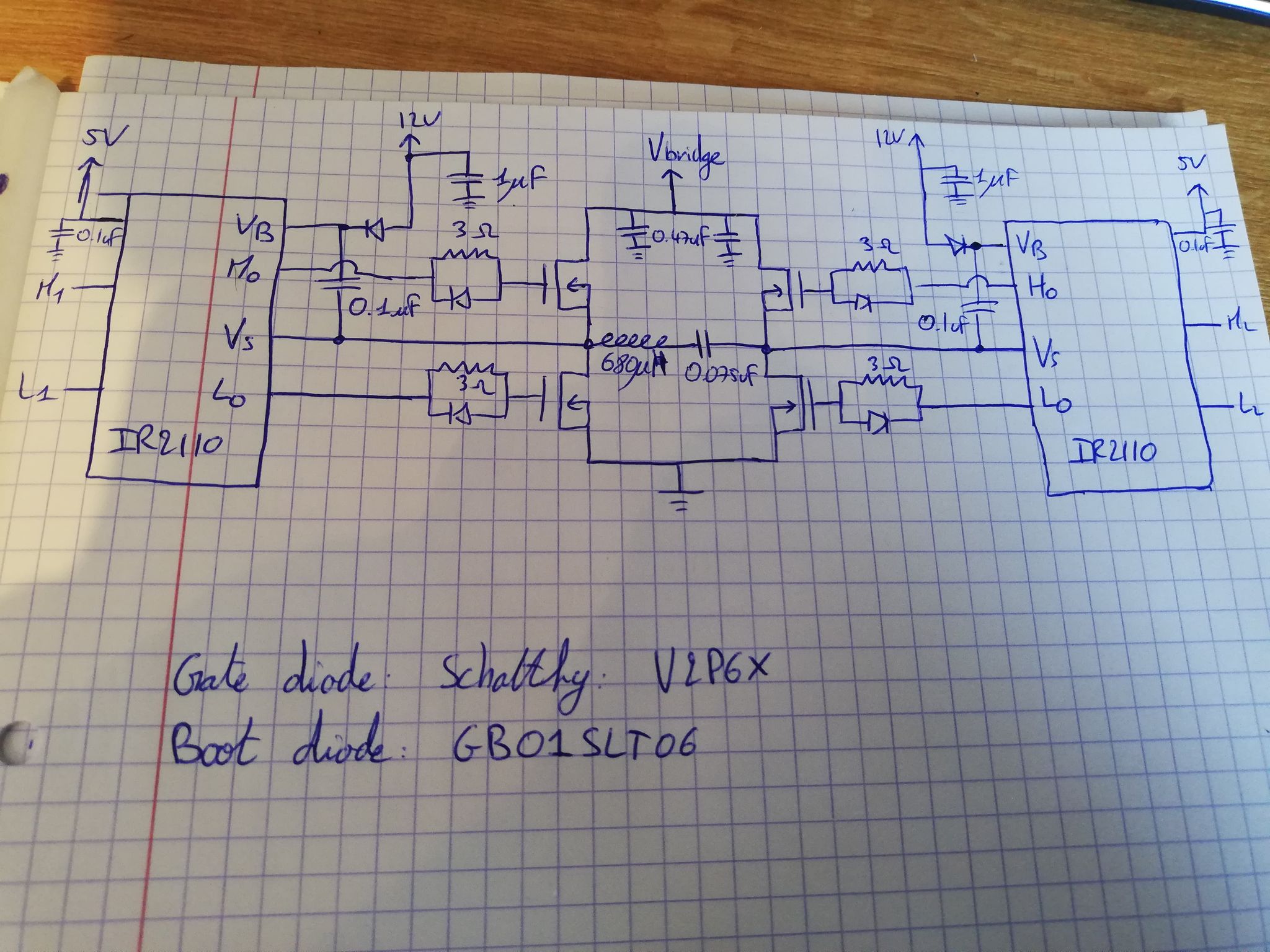 This behaviour is something I never met before and I really can't find any explanation. It is even more strange to me because it occurs only in one leg and only after a given voltage value.

Did anyone ever meet a similar kind of behavior, or does anyone have a clue on how to solve this?

Your deadtime and Vgs are not shown which must be done with proper > 100MHz probing techniques to eliminate probe ground inductance of ~1nH/mm into the probe cable capacitance using a spring coil on tip/ring or FET diff probes. For this reason , your xx ns risetime test points ought to be twin vias for the sig.+gnd. to match the gap of the spring probe. Improvise for now.

Possible causes of failure are;

FWIW there are thousands of published works on kW level WPT on Google Scholar and Microsoft Academic (over 21k articles, some which may be useful to cite)

The IR2110 does not incorporate anti-shoot-through circuitry and you have made no mention that your digital input signals are designed to provide a small period of dead-time that prevents both MOSFETs (top and bottom) being simultaneously activated for a short period of time. When this happens you get a massive pulse of current that can easily destroy MOSFETs and, symptomatically, this gets worse as you raise the supply voltage.

The other problem is this: -

1
H-Bridge Motor Controller High Side Strange Behavior
5
Full bridge HVDC to modfied square sine - random half side MOSFET burn
3
MOSFET to run 12 V, 0.5 A door lock
1
Choose Vcc for MOSFET driving a 48v Motor
3
MOSFET's drain and source short out in high side driver circuit
3
How can I get rid of this distortion?