voltage-regulator power-electronics thyristor
Share
Improve this question
asked May 4 at 9:37

With or without thyristor, the same differential equations apply: you have a voltage across an inductor, therefore there will be a time when the voltage and current will not be both above zero. The conduction will stop when the current tends to drop below zero and the voltage is below zero (i.e. reverse polarized). The field collapses, since there is no voltage to sustain it. Unless the second thyristor acts, in which case it will be as if there are no switches (ideal case, no dead-time), or the waveform will have a dead-zone. Here is how the angle α=[1/4,2/4,3/4]*π affects the waveform for a single thyristor, (black trace) and two anti-parallel thyristors (red trace, overlapping on the positive side with the black trace), when driven with almost no dead-time: 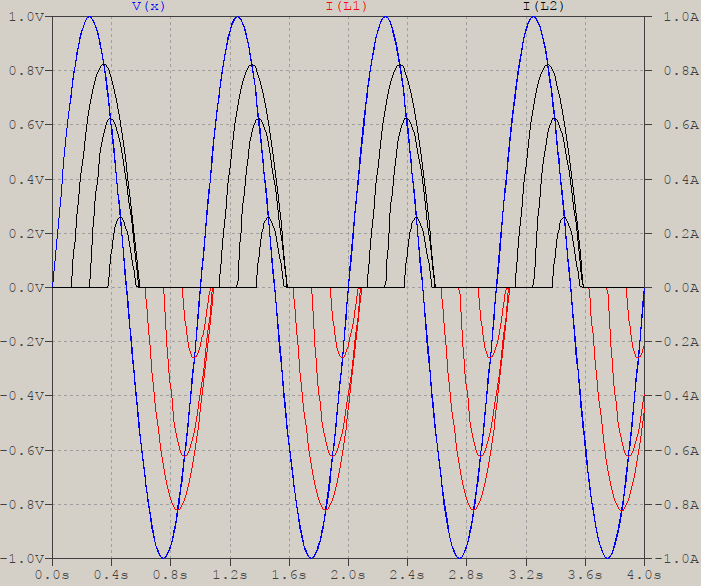 In all cases for the single thyristor, the current stops because the voltage is negative, therefore it is blocked and the current simply decays to zero and stays there. For the two thyristor case, the current starts ramping up (or down, reverse polarized) as soon as the second thyristor enters the conduction mode. If there was only the 2nd thyristor there, the waveform would have stopped ramping up and stayed at zero (the reverse of the black trace).

Not the answer you're looking for? Browse other questions tagged voltage-regulator power-electronics thyristor or ask your own question.