How to transmit ASCII over RS-232?

i want to display the voltage level through a Potentiometer over the serial comm line(RS-232) in pure ASCII. I am trying to do this using MC9S08AW60 on the Board-DEMO9S08AW60E. So, if the potentiometer is at 50% position, on Hterm it should show as following:

Now for this(6 bytes) i need to be able to convert decimal to ASCII and transmit the same over RS232. I cant seem to find the logic behind conversion of decimal to ASCII. 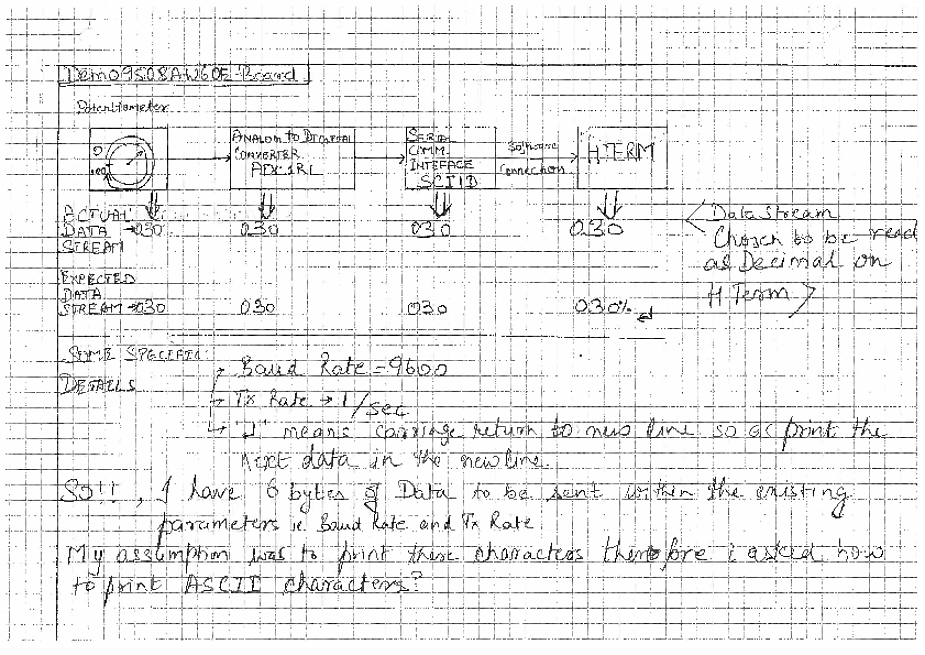 Here's part of a minimalistic printf implementation I've been using. It was originally written by Georges Menie of www.menie.org, according to the GPL notice at the top of the file. I have been modifying the implementation as a whole, and haven't really been keeping track of the changes, though, so you probably should use the original which seems to be available at http://www.menie.org/georges/embedded/#printf

The function listed below converts an int to its ascii string. You can try to follow the code and strip out the parts which you don't need. There are calls to prints in the function, which deals with padding and handling the width of the string. It also does the actual sending of chars via putchar. I haven't included that function here to reduce clutter. You should implement your own function to to do that here, which basically would send out each of the chars via your serial/rs232/uart peripheral until you encounter \0.

So I dug a little bit for you. Take a look at Freescale's "HCS08 Peripheral Module Quick Reference"which is linked from the product page. There is a section titled "Using the Serial Communications Interface (SCI) for the HCS08 Family Microcontrollers." And Subsection 2 of that section is titled "Code Example and Explanation." Follow the bouncing ball and that should get you going. The Dev board already has the circuits needed to go from TTL UART to RS232. There's also code examples in there for the ADC. You'll then just need to manage converting your ADC readings into ASCII using "the usual methods" like, for example, sprintf from stdio.h.

Half the battle with acclimating yourself to a new controller/processor is figuring out where the examples and support ecosystem reside. Hope this helps. P.S. The code examples zip file referenced in the Quick Reference is here (not the easiest thing to find).

While you can probably do this with a printf-family function on that platform, it's informative to consider how you might write you own implementation. For example:

The starting point code you've added seems to contemplate doing the conversion inside the transmit buffer check; that won't really work for multi-byte sending. Instead, your outer loop doing the ADC sampling would have the decimal-to-ascii conversion loop inside it, and inside that at the point where it's generated a single character would be a while looping waiting for the serial port to be ready for a character. (That is, assuming you don't need to do other things in the meantime - if you do, you'll need a software-managed transmit buffer and something such as an interrupt service routine to pull waiting characters out of the buffer and send them each time the serial port becomes able to accept one).

Not the answer you're looking for? Browse other questions tagged c rs232 code-design or ask your own question.