Can someone explain what the sets of resistors and capacitors do? im a student in my second year in EE we were asked to simulate this circuit for various sinusoidal frequency inputs and record the amplitudes and i have done it and as i increase the frequency the amplitude of the output voltage wave decreases yet i still dont understand why theres a third opamp if the measurment is taken from the output of the second and what does each set of resistors and capacitors do individually i know that a capacitor and resistor in parallel will have a Zeq=R/1+rsc in laplace domain but how does this affect the cutoff frequency in this circuit 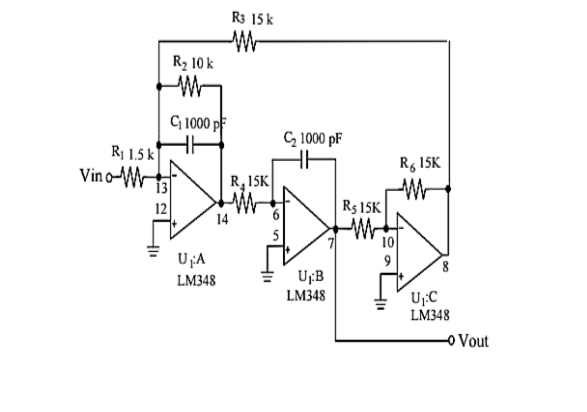 The shown circuit is a so-called "Biquad". In the literature you can find a desription under the name "Tow-Thomas-Filter".

The last inverting amplifier is necessary because the overall feedback path always must contain an odd number of inversions due to DC stability reasons.

Explanation: The first opamp realizes a first-order inverting lowpass and the second one is a simple inverting integrator (another 1st-order circuit). So we have two first-order functions in series with overall negative feedback - thereby producing a complex pole pair.

How do we arrive at a bandpass function at the first output? As seen from this output we have a lowpass function (1st opamp) with another lowpass in the feedback path (an integrator is a lowpass with a very small cut-off frequency). We know that negative feedback inverts the feedback function - hence, the 2nd opamp acts as a highpass function - as far as the output of the 1st opamp is concerned.

Thus, the first opamp together with the 2nd opamp one form a lowpass-highpass combination: A bandpass.

In your circuit we have C1=C2=C and R3=R4=R. In this case, the pole frequency (of course, for both lowpass and bandpass function) is simply wp=1/RC. (This is also the midfrequency for the bandpass, wp=wo). The quality factor Qp (selectivity) is given by Qp=R2/R.

Not the answer you're looking for? Browse other questions tagged filter low-pass active-filter or ask your own question.