How do you find the transconductance of an external crystal oscillator?

I am trying to connect an external crystal to my STM32F446RC MCU.

I am following this guide to check for the compatibility: https://www.st.com/resource/en/application_note/cd00221665-oscillator-design-guide-for-stm8afals-stm32-mcus-and-mpus-stmicroelectronics.pdf

The only part of the equation I can't find in the datasheet of the crystals I have seen is the transconductance value, where can I find this?

Example of crystal oscillators' datasheets I have seen: https://ecsxtal.com/index.php?plg=sslfixer&url=http%3A%2F%2Fecsxtal.com%2Fstore%2Fpdf%2Fecx-3sx.pdf

stm32 crystal transconductance
Share
Improve this question
asked May 5 at 20:04

The transconductance cannot be found on crystal datasheet, because it is not a property of the crystal.

It is a property of the oscillator and therefore found in the MCU datasheet. 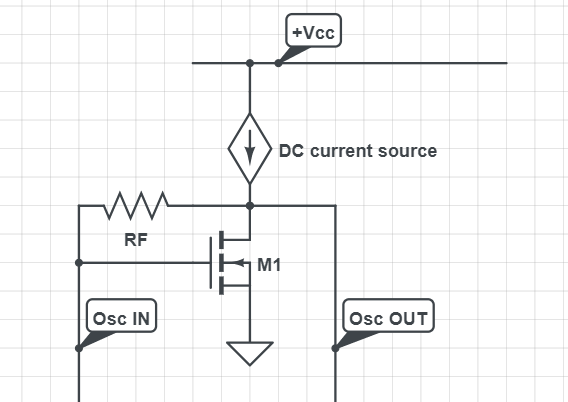 RF (=feedback resistor) is several megaohms. The idle DC voltage at the Osc OUT pin and at the gate of M1 is about the same as the treshold voltage of fet M1.

If a small amplitude AC signal voltage Uin is summed to the DC at the gate of M1 the small signal transconductance Gm of M1 defines what AC current there occurs in the drain current of M1. It is Gm * Uin.

STM32F446RC datasheet doesn't have the transconductance of the crystal oscillator amp. It's not needed because they say it in other way. They specify the maximum allowed value for quantity Gmcrit which is a property of a crystal+its nominal load capacitance. That property is not in usual specs of the crystals, because it's taken into use in your linked oscillator design guide (page 13) by the writer of that guide. There it's calculated as follows:

If Gmcrit is allowed to be max. 1mA/V the Gm of the oscillator amp must be a few times bigger, say 5mA/V or more to have some margin and a plausible start of oscillation. You must calculate if your crystal has small enough Gmcrit.

Not the answer you're looking for? Browse other questions tagged stm32 crystal transconductance or ask your own question.

2
Can I use a series crystal in an parallel crystal optimized oscillator?
4
For a crystal oscillator circuit, what effect would a series resistor have on the inverter input?
0
What to do with unused opamp inputs in STM32L4?
0
ST MCU Calculating external capacitor values for oscillator on STM32F2
1
Where would be the best place to start looking for information on developing a bootloader using 2 microcontrollers for a CubeSat?
0
STM32F446 & External Oscillator
0
STM32F446 HSE recommendations