Loopback Latency of an Audio CODEC?

I'm thinking way ahead about a possible future project which will contain, among many other things, a "DIY hearing aid" of sorts. Microphones feeding earbuds with some DSP in between, all in a physically small space. Not because I'm hard of hearing, but to account for an acoustic lowpass caused by a different part of the project.

I have some experience using digital live audio systems that claim about 1ms latency from the ADC's, all the way through the (quite involved) DSP, to the DAC's. In other words, a stereo recorder hooked up to a Y-splitter at the ADC input for one recording channel, and the DAC output for the other recording channel, would measure about 1ms offset between them. (see the test circuit below)

That's fine for a concert, where you can easily have more physical offset than that (~1 foot) between the mics and speakers, but for my project, I'm looking at several inches at most.

So, to get a feel for what I'm stuck with, and how much I need to optimize and overpower my DSP code to fit in the time remaining (small buffers, even down to a single sample just to get it out NOW!, which means I can't use SIMD instructions - increased sample rate, not for "audiophool" quality but just to shorten the turn-around time - etc.), what latency can I expect for a typical audio CODEC chip in this test circuit?: 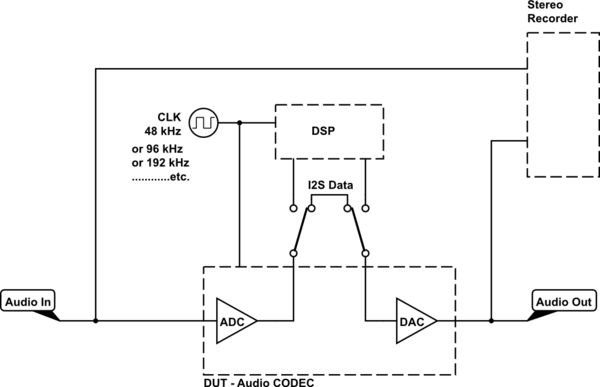 I expect a minimum of 2 samples, just because of how I2S works - latch and shift out from the ADC, then shift into the DAC and latch again - but I imagine that the conversions themselves aren't instantaneous either.

I've looked at a few datasheets and, at least for the cheap ones, I can't find a parameter that tells me the overall latency. For their intended application of PC audio, I can understand that it's not important, but for this project, it kinda is.

What parameter(s) should I be looking for in a good datasheet? And are there any rules of thumb / tribal knowledge that would be useful as well, in terms of realtime DSP where the output might combine with the original input, after a small speed-of-the-wave delay of the original input? (1's of samples at 48kHz)

Of course, all of this might not even matter, depending on the acoustic lowpass that I end up with, for which this DSP needs to be a complimentary highpass with transducer-correction and peak-limiting. I have no idea what that acoustic lowpass is going to be, so I'm looking for enough general information that I can evaluate it when the time comes.

(If the crossover frequency ends up being low enough and steep enough (overall latency is a small fraction of a single wave), this may all be a moot point; I'm not going to hear the original anyway, where it matters, so just throw some pre-fab code at it and call it good. Or the crossover might be high or gradual enough that it does matter...)

Anyway, I'm looking for enough general information that I can evaluate it when the time comes. Thanks!

Didn't you just specify the answer?

You said spacing of "a couple inches". Sound is roughly 1ms per foot. Let's assume 4 inches which means roughly 400us (I'm being VERY loose to make the math easy).

The codecs are probably close to 1 sample of latency on DAC and ADC if you turn off on-board DSP processing. Nobody actually tries to delay things (unless you have on-board processing and ask them to), but you have to have a full sample in order to transmit/receive on the digital bus.

I would also caution you about being too stringent in your audio specifications. Most people have ... quite imperfect hearing. I have created audio systems where there was a variable 5-8% pitch shift (for delay compensation reasons in really bad cases). It was painful for me to hear, but the vast majority of people didn't even notice even after I pointed it out.

I recommend that you set your specifications to the human perception average and allow tweaks for those who are outside the norm.

What parameter(s) should I be looking for in a good datasheet?

I think I finally stumbled onto the answer for this one. It's called "Group Delay", as on pages 16 and 20 of this datasheet. It appears to be measured in samples, though the datasheet gives the unit in seconds and the number as x/Fs.
Page 21 gives the valid sample rates for each mode.

I had to google "group delay", because it wasn't something I was familiar with, and found this useful explanation. So in the context of an ADC or DAC filter, it seems that the converter itself does indeed delay the signal by that many samples.

In the case of the one linked here, that's 12 or 9 samples for the ADC at 48kHz or 96kHz, respectively, and 10 or 5 samples for DAC, for a total round-trip of 22 or 14 samples from analog in to analog out, just in the converter chip itself.

I think I can work with the shorter of those, provided I can keep up with twice the number of samples! Even if it does comb-filter at the very top end (the wavelength of 20kHz in air is ~5/8in|~1.5cm), it's pretty well attenuated acoustically (the reason this project exists in the first place) so it's probably not noticeable. As long as it lines up closely enough through the crossover region (acoustic lowpass, DSP highpass), I'll be happy.

Interestingly enough, the delay figure for 48kHz is almost half of the 1ms that the commercial live sound gear advertises for its total latency. I guess it would be reasonable for some complex routing and a handful of transports to take the other 26 samples or so.

And are there any rules of thumb / tribal knowledge that would be useful as well, to avoid an acoustic comb filter from a live / realtime DSP...?

Well, an obvious one, given the first part of this answer, is to run the system as fast as you have enough clocks per sample for in the DSP! What that number is, depends on what your DSP is, what the processing is, and how you optimize that processing.

96kHz isn't going to sound any different from 48kHz, but with the codec mentioned above, it results in ~1/3 the latency!

Not the answer you're looking for? Browse other questions tagged audio adc dac latency audio-codec or ask your own question.