How do people prototype circuits without getting shocked?

I am just getting into soldering, developing prototypes on perf boards and microcontrollers. The current for some can be as high as 2 A. I am trying to build a drone and the BEC for one ESC is 5 V and 3 A. This may sound stupid, but how do people not get electrocuted when soldering connections that carry this current. And I don't see insulation put directly on the soldered connections or on the circuit board either.

Especially when you look at prototyping in general, there are wires hanging out everywhere and likely more than 2 A coming out of the power source. At those soldered connections, shouldn't it be practically lethal to go near it? The wires insulate the paths, but the connections should be dangerous to touch, right?

It’s a common misconception with beginners that a 2A power supply will force 2A through anything that touches it. This isn’t the case. Most power supplies are (more or less) constant voltage, so the resistance of the load determines what current flows. The human body has a relatively high resistance and so low voltage circuits can be handled with only tiny currents flowing. In my experience I can’t feel any current below about 1mA and for me that happens at about 100V (don’t try this at home). Even for low-voltage circuits it’s good practice not to handle circuitry when it’s powered, as it’s easy to cause shorts or disrupt sensitive signals.

"How do people prototype circuits without getting shocked?" They switch off the power before soldering it up. This is not for fear of shock but for fear of damaging the components. The soldering iron tip is usually grounded for the same reason.

Only experienced engineers should ever try soldering a live circuit. They know how to avoid harming the components, for example by using a special soldering iron with the tip floating and not grounded, and also considering the potential for static buildup.

Another answer has explained why the threat is not supply current, but voltage.

Human skin has a pretty high electrical resistance at low voltage (you can measure it with an ohmmeter, just grab the probes). If you stick your finger on low voltage like below 24V you won't feel anything. Some current will pass in your finger but it will be microamps. Last time I punctured a finger with the pointy end of a wire that had about 12V on it, I did feel a small shock, because that bypassed the skin resistance.

Wet/sweaty skin has lower resistance, and mucous membranes much lower. Back in the day we used to check if a 4.5V battery was still good by licking the terminals, I don't think anyone died from that. If you try it with a 9V battery though, you won't try it again.

But, just because current is flowing in wires doesn't mean it will also flow into you.

Above a certain voltage, skin "insulation" breaks down, then its resistance becomes low enough to let a dangerous current flow. You could think "ohm's law", so touching a wire with 230V would cause about 10x more current in your finger than at 24V, but this is not true. At 24V the skin is a good insulator, but not at 240V. So at 230V the resistance is much lower, current increases dramatically, and you get zapped. That's when you absolutely have to take precautions.

But if you only use low voltage, no problem. Safety is more about not getting burned with the soldering iron, not breathing the solder fumes, and not getting bits of exploding MOSFET in your eye.

If you solder or probe on powered circuits, you can cause a short and destroy the circuit, then you drop the soldering iron on your finger.

And if you solder or probe on a powered circuit using LiPo batteries, what you should be worried about is fire... 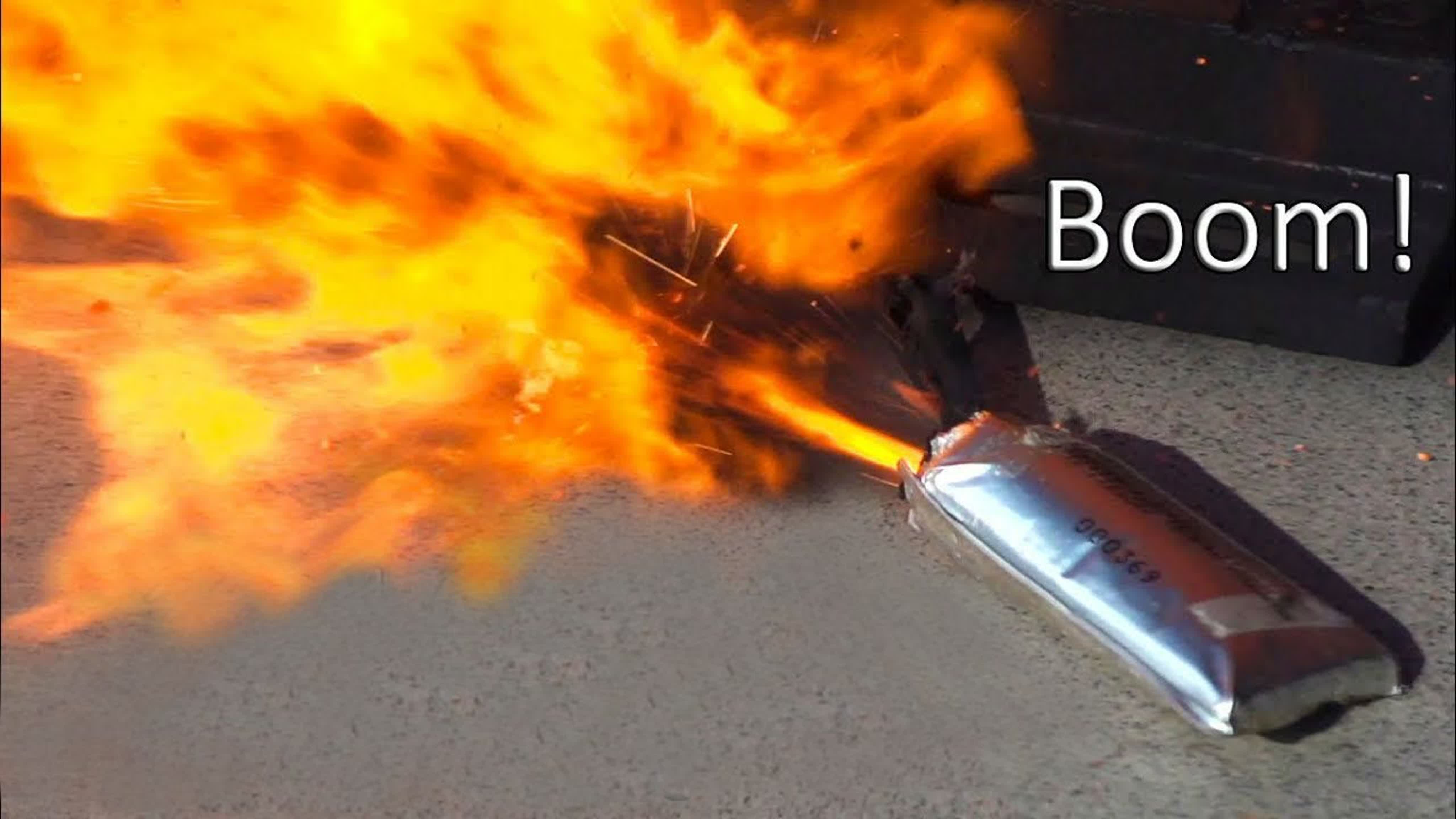 While I'd be cautious about a circuit with 48V on it, you can pretty freely work around open terminals with 12V or less on them.

Note that for power electronics at these low voltages you do want to worry about things getting hot and burning you. Auto mechanics know that a wrench dropped across a 12V battery will get red hot -- some of them have the scars to prove it. So while worrying about catching your drone on fire (and possibly that fire catching your house on fire) is a very very valid concern*, you don't have to worry about electrocution.

* Search around for "LiPo fire" or "drone battery safety" -- you should find plenty of material explaining how to play with it all and not burn your place down.

The amount of amps \$I\$ you get depends on the combination of resistance \$ R\$ and voltage \$V\$ you have, this relationship is called ohms law

Your drone has a low resistance in it's circuit, so you get 3 amps circulating in it.

This means that the very same 5 volts will produce a much lower current (Amps) across your body compared to the drones circuits.

That current is so small you will not feel it at all.

You're expecting human skin to be ohmic: follow V=IR. Nope.

Human skin works more like a VBO (Voltage Breakover) device. It doesn't flow current until a certain voltage, and then, it does.

That voltage varies wildly by conditions (generally, wetness). But 12V is a very safe number; the only time someone was killed by that was when they sought out a Darwin Award by using needles to pierce the skin at both terminals. Generally it is touch-safe at higher voltages, but I can tell you 64V is not one of those voltages :)

In olden days when testing systems which were necessarily live, the standard approach was to stick tape over the contacts you didn't want to touch. Most people would get a few unpleasant reminders of where to put the tape until they knew the layout they were testing well enough to do it in advance.

You'd not be wanting to wear a metal watch or other adornments. That's even more true in systems where you may find higher tension (HT), for example old internal combustion engines.

With lab power systems where things are significantly more lethal gloves are mandatory and have other advantages for dealing with sensitive kit.

I've built many RC aircraft and on average my "small" planes (considered "micro" in RC world) can use 20A of current. By comparison 2A starts going into the "ultra-micro" realm (most ultra-micros I own actually use around 10A, building 2A planes is possible but very difficult and require specialized building skills). Most normal RC aircarft use 100A and above.

Having said all the above, I'm going to answer the question from an RC builder's point of view and ignore all the physics and equations and instead base it on rules of thumb and advice passed on to me from previous generations of builders and common sense.

The common sense answer to this is simple. You never solder connections that carry current. NO, JUST DON'T DO IT.

Instead you solder unpowered circuits to connectors. For smaller circuits like yours that usually means a JST or one of the micro-JST connectors. Best to use the same connector that comes with your battery.

When soldering your circuit there is zero current because there is no battery connected. Only once everything is done do you connect the battery to your circuit. NEVER START WORKING ON YOUR CIRCUIT UNTIL YOU'VE REMOVED THE POWER SOURCE (for RC models this means the battery)!

Now, once in a while you may need to solder your battery to a connector (for example if you bought a battery with the wrong type of connector). Working with batteries is a bit more "risky" but just follow the one simple rule: never let the positive wire touch the negative wire. I often tape one wire when working with the other. Also, be very careful not to transfer too much heat to your battery when soldering. Best case is you can potentially damage your battery. Worst case is an explosion.

If you are not comfortable with your soldering skill then do what most people do: don't solder your own battery. Instead buy one with the right connector or change the connector on your circuit or build an adapter (a short piece of wire with two different types of connectors).

Not the answer you're looking for? Browse other questions tagged microcontroller power-electronics safety prototyping drone or ask your own question.

8
How Do You Prototype with QFP-Only Components?
2
How to prototype with an 8-pin 'daughter board'
38
How to prototype?
13
Why must Integrated Circuits be baked (in the oven) before being used on a prototype board?
1
How to make prototype circuits that include microcontrollers, and avoid breadboard annoyances at high frequencies?
4
How to make final good looking prototype of our project?
11
How can I safely prototype a mains power circuit?
0
How to prototype 9-VFQFN?
0
How does the iPad not electrocute people without grounding?