I was trying to visualize a beginner circuit problem on my breadboard and I plugged in my circuit, touched a resistor and got a nasty shock. I am a cs student playing with circuits to build some logic gates so I really am a complete beginner.

The power supply is 5V 2 Amps Why did this happen? How can I prevent this from happening in the future? 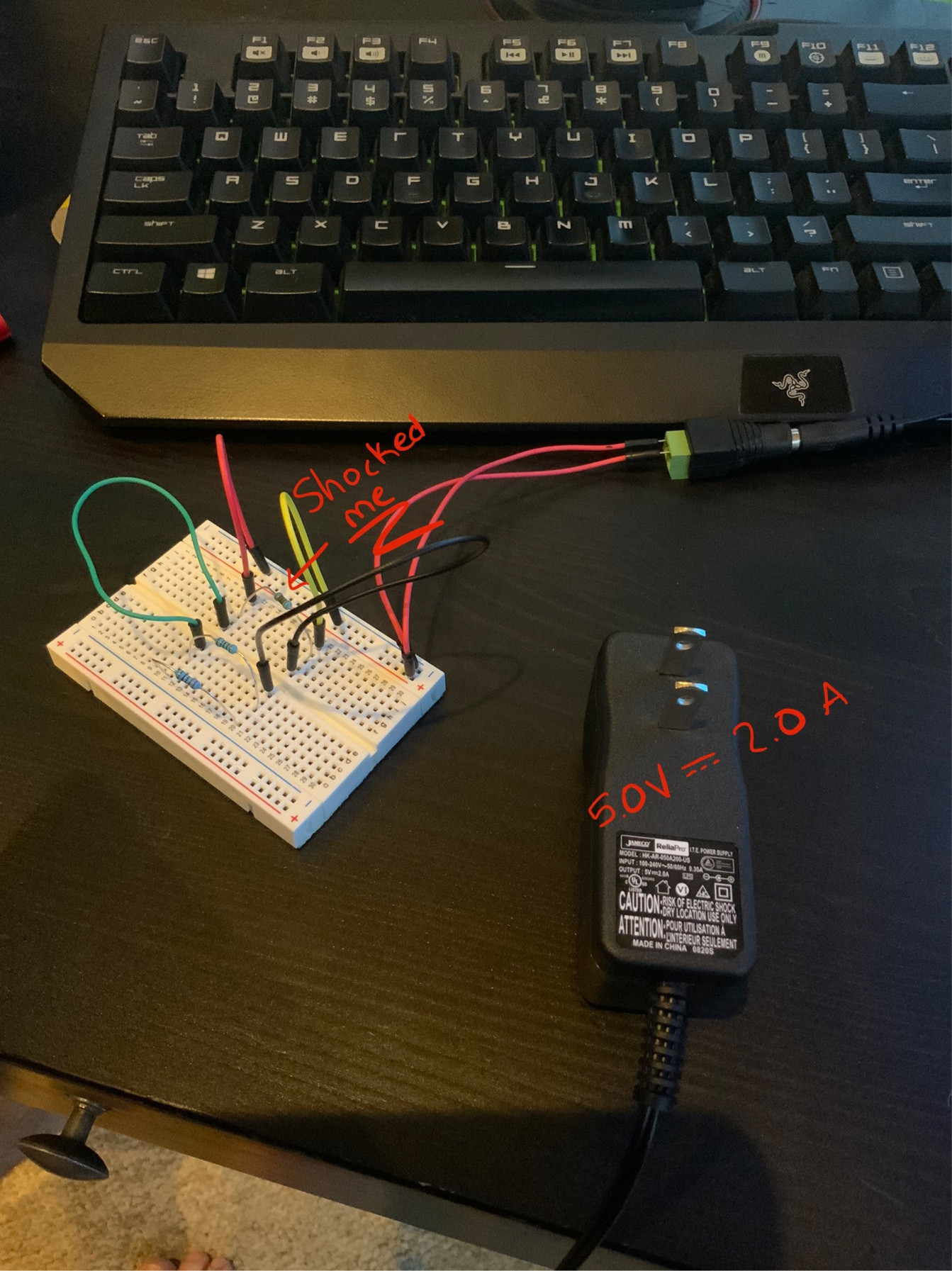 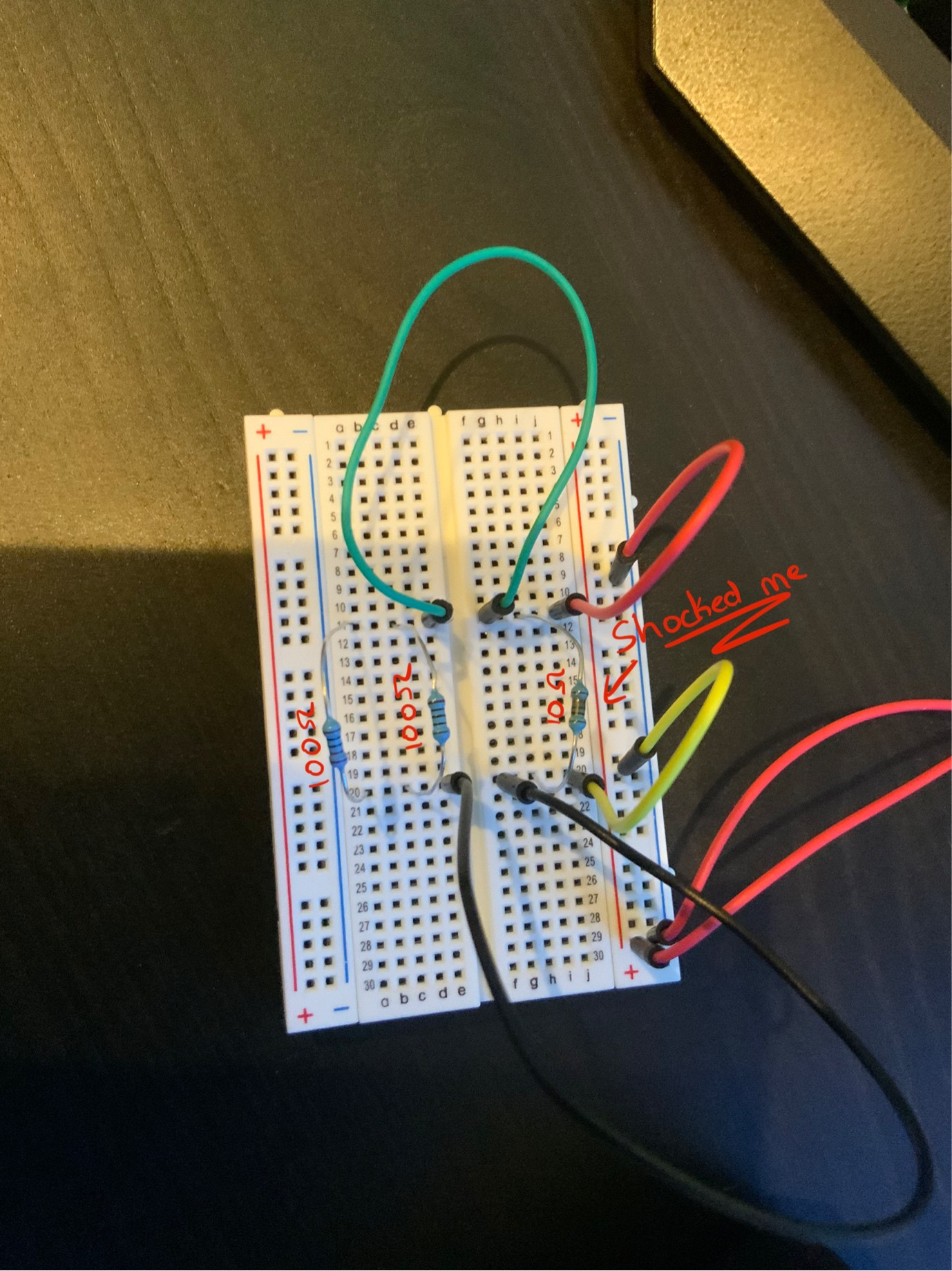 OK. You say that it was a single jolt, and you pulled your hand away immediately.

It was one of two things -- either it was static discharge and a true shock, but exactly what you would have gotten from a doorknob, you burnt yourself, or it was an actual shock and I can't count.

You're running 5V through a \$10\Omega\$ resistor, which means that it's dissipating 2.5 Watts. That means it'll get hot in the thermal sense. That is, in fact, why it's a bit browned compared to the two 100 ohm resistors (which will dissipate 0.25 Watts at 5V). If you're expecting a shock, and you get burnt, you'll think you got a shock (trust me on this -- even if you've been doing it for 40 years, you'll still do it).

I'm pretty sure that's what you felt. It's hard to describe how to safely test a part that's sizzling hot for temperature -- it involves holding up the back of your finger to the part without touching it and feeling for heat, or briefly touching it and seeing if you feel heat afterwards. In extremis (I'm really bad about thermal safety) you lick your finger, touch briefly, and listen for a sizzle.

Had you hung onto the thing a bit longer, the "tss" sound, the bad-smelling smoke, and the shiny, resistor-sized spots on your thumb and forefinger would have let you know that it was thermal, not electrical.

It was either just a static discharge, or it can't just shock you, you must have also been in contact with some other metallic structure, such as a radiator.

If it was a short sharp pain, then it was just static discharge. You get charged up moving in your chair wearing plastic clothing. Then you discharge when you touch something, like another person or this circuit in this case.

If it was more of a tingling feeling that lasted longer, aka as long as you were in contact then it really was your classic electric shock caused by touching a somewhat constant high voltage source.

It could be that there is a short between the primary and secondary circuit of your power supply causing the high voltage from your wall outlet to be present on the outputs. Since the power supply is doubly isolated (as indicated by the symbol: square in a square), it is very unlikely that there could be a short between the primary and secondary windings, without the whole primary circuit/winding being shorted as well, causing your circuit breakers to go off when you plug the thing in.

If it wasn't just a static discharge, than the most likely culprit are your switched mode power supplies in your PC, that can generate a voltage (compared to earth ground) on the metallic parts of the PC and all other things connected to these metallic parts. This occurs, if the PC is plugged into a wall outlet, that is not grounded. In this case, if you touch something in contact with the metallic parts of your PC AND also something metallic in the building structure (pipes, radiator, aluminum window frame), then the current will flow through you down to earth ground, as these things are grounded.

The first certainly, but I think the second as well should be caught by your RCCB, if you have one installed. So in conclusion, probably it was just a static discharge. If you have a multimeter, you can just measure the AC voltage between the power supply outputs and whatever metallic structure you were touching at the time.

You are using a switching power supply with a two prong mains connector. These often include a pair of (hopefully!!) Y1 rated capacitors bridging both poles of the mains connector to the output ground, for EMI suppression purposes. This lifts the output to half the mains voltage, if there are no further grounding provisions on the secondary (output) side. While the current should be limited enough to prevent any injury, especially with a 240V mains it can still sometimes be clearly felt when touching the output of such a power supply. And in some cases, it can damage circuitry that is connected to earth ground in some other place than circuit ground.

Connecting the ground (usually minus) pin of the output to actual earth/protective ground should eliminate this problem.

Consider getting a real lab power supply sometime - chargers, laptop power supplies, computer power supplies .... tend to make a bad substitute for them due to a) issues like this, b) usually non existent adjustable output current limiting (bad with AT/ATX computer power supplies, these can deliver car battery grade currents with very destructive results), c) dubious/not well defined short circuit handling (2.0A might NOT mean the current is limited to 2.0A, and short circuit proof might NOT mean overload proof!), d) sometimes actual safety problems with the cheapest models (eg internal insulation not up to code, or ordinary capacitors used where class Y1 would be required....) - such problems can be very bad if you use them for breadboarding where you expect to routinely touch bare, powered wiring).

In 1953 I was in grade 8 taking a class, "Radio and Electricity". Lesson 1 was how to safely disconnect a shock victim from high voltage and how to apply artificial respiration. (They did not have heart revival in those times.) We were also not taught these rules for working with electricity:

And then there was the time when I got my hands on 100 9 volt batteries. It seemed unbelievable that I could just clip them together and get 900 volts. I tried it, and almost died! But I came away a true believer in the theory of hooking voltage sources in series. I quietly disassembled the stack and never told my folks about that accident. It was bad enough getting scolded for doing CW at 3 AM.

Not the answer you're looking for? Browse other questions tagged power-supply voltage power circuit-analysis current or ask your own question.

68
What does the Y capacitor in a SMPS do?

3
Non ideal op-amp equivalent circuit output voltage
0
Why do I experience a voltage drop between logic gates when combining multiple gates (7408 and 7402)
0
Bread Board Power Supply
2
Integrated voltage regulator chip versus discrete circuit utilizing op-amps and power BJTs for DIY bench power supply
1
Adding capacitors prevents car peltier cooler from making low battery light flicker, but why?
3
Complex Voltage and Current in Steady State DC Circuit with Nonlinear Component
0
Power Source Switching (my first circuit) -- will I blow anything up?
0
Why there is voltage differences in this question and how can I add up resistors to complete voltage?
2
RC Circuit Equation
1
555 timer Bistable circuit not working as suggested, bad circuit?