Is a transistor truly an amplifier?

My understanding of transistor is that in it a tiny current controls a huge current. I get that concept. If that is the case, it is not amplifying anything in my opinion. Sure it does dictate when the huge current can or can't flow but it is doesn't change the huge current in any way I think.

Is it correct to call a transistor an amplifier?

So after going through the answers and bit more reserach I think I found the answer. This is what I think is happening. In transistor, Ic is proportional to Ib (and i think this is the key). So since Ic is proportional to Ib, Ic is an ENLARGED COPY of Ib. So if Ib is our input signal, Ic becomes enlarged copy of that input signal and that is why we say it is acting as an amplifier (creating an enlarge copy of the input). Please let me know if this interpretation is correct.

It sounds as though you are thinking of a transistor as a switch where it is either fully on or fully off. Many applications use it as a controllable element where it is partially on. In these cases, the base is used to control the conductance of the collector-emitter terminals and hence it controls the current in an analog manner. This fits the dictionary definition 2 above. The fact that it is controlling the amplitude of the current means that it is changing it. 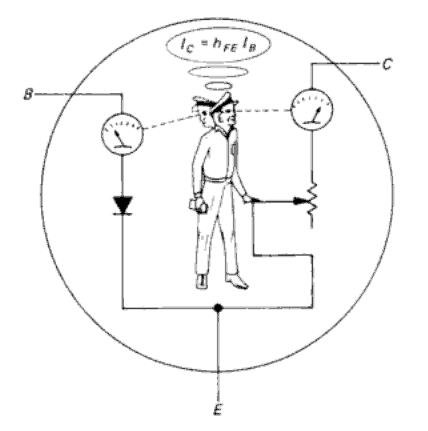 It is the transistor's ability to amplify a small control signal to provide a larger output current or voltage that makes it so useful.

Other answers have explained about a small current or voltage controlling a larger current or voltage. You must also consider the end result. The ability to make the larger current, voltage and power duplicate the variation or amplify the signal is the ultimate objective. The an information signal is made stronger so that it can be transmitted over a long distance with out being changed. More power in the signal also allows it to be converted to a louder sound and still have the same sound quality. A signal variation can also be made more powerful to control motion accurately when converted to mechanical power with a motor. Ultimately we must consider that it is the signal that is being amplified by controlling voltage and current from a power supply.

A transistor is often used in configurations which amplify signals by modulating the amounts of externally-supplied energy that get directed to the output, converted into heat, or allowed to remain in the source. Because there is no such thing as a perpetual motion machine, it's not possible to amplify energy. It is possible, however, to construct a device which, upon receiving small amounts of energy at the input, will cause an output to receive large amounts of energy that it would not otherwise have received. The device will need to take that energy from somewhere, but if it is given a source of "bulk energy" it may take that along with a small signal, and from the combination output a large signal.

By way of analogy, a photocopier doesn't simply take one document and produce many copies of it. Instead, it takes an original document along with a supply of blank paper and toner, and combines those things to produce copies of the original document. In functional terms, a photocopier "amplifies" a document, but it doesn't actually turn one document into many. Instead, it uses a document to direct the process of producing documents from of blank paper and bulk toner.

The word "transistor" was coined at Bell Labs to convey the function of the device:

you're thinking the transistor is only a switch - yes it can switch but it can also vary the current based on the input, so it therefore 'amplifies'. The collector current is related to the base current and one of the transistor specifications is its gain usually referred to in the datasheets as hFE.

There's a load of theory that determines how the transistor operates as opposed to my simplification above.

They are not a simple device, say, as compared to a mechanical relay, so one needs to understand a fair portion of the theory to confidently choose a suitable transistor and design a circuit to operate according to expectation.

No - the "naked" transistor is not an amplifier. It is rather a kind of converter.

It converts a small change of the (input) voltage between base and emitter into a corresponding change of the output current (emitter or collector current - depending on the output node definition).

Together with some external passive components (resistors, capacitors) the transistor can be used to form a so-called "amplifier stage", where the output current variations are transferred into corresponding voltage variations.

Additional Comment: As we can see, my answer has triggered a number of comments, which are all about one single question: Is the bipolar transistor (BJT) - from a purely physical point of view - an element where the magnitude and variations of the emitter current (and thus also the collector current) is controlled/determined by the voltage between base and emitter or by the flowing base current?

I have given my answer above - and there is no shortage in quotations, explanations, observations, effects and circuit characteristics, which can support and prove this statement of voltage control.

But as we see, there are also other views and claims:

However, I must state that for both views no meaningful examples have been presented yet. I think, the originator of this thread ("Is the transistor truly an amplifier?") should be informed about this controversy in order to form his own opinion.

It is interesting to know that the co-author of the book (Winfield Hill) is not very happy with the over-simplified representation as shown in this illustration. Here is what he writes

"BJTs are transconductance devices (voltage in, current out), just like tubes and FETs, which means they are first and foremost, voltage controlled."

By the way, some lines below the mentioned figure ("transistor man") the book says:

"One warning is in order here: Dont think that the collector of the transistor looks like a resistor. It does not. Rather, it looks approximately like a poor-quality constant-current sink (the value of current depending on the signal applied to the base)."

Some lines later we can read:

"The transconductor model will be accurate enough.. ......to understand differential amplifiers, logarithmic converters, ...and other important applications you must think of the transistor as a transconductance device - collector current is dermined by base-to-emitter voltage"

I think, this information given with the figure is necessary in order to interprete it correctly.

For this purpose, first we take another voltage source (power supply) with a voltage Vcc higher than the expected maximum value of the output voltage.

Then, to produce VOUT = K*VIN, we have to remove a part of the supply voltage. We can do it by connecting an element (carbon microphone, tube anode-cathode, transistor collector-emitter or drain-source…) with a general property of resistance. The IV curve of this resistance is not so important since, as a rule, a negative feedback is applied. The only important feature is to dissipate power… and it is controlled by the input voltage. So, this element is a sort of a "voltage-controlled resistor" (they call it "active" or "amplifying" element).

For example, in a common-emitter and common-base stage, voltage drop (VCE) appears across this element and we take the rest voltage (VRc) across the load (Rc) or its complement VCE = Vcc - VRc as an output (VOUT). The latter is necessary in the case of an NPN transistor since usually the load is grounded.

Similarly, in an emitter follower, there is a voltage drop (VCE) across this collector-emitter part of the transistor and we take the rest voltage (VRe) across the load (Re) as an output (VOUT).

So, in any case, there is a voltage divider configuration of two resistor elements in series - a variable "resistor" (transistor) and steady resistor.

Gain is the fundamental thing that defines an amplifier and distinguishes it from other electronic circuits.

So, yes, the transistor really is an amplifier because it has gain when used in a circuit a certain way.

Not the answer you're looking for? Browse other questions tagged transistors amplifier active-components or ask your own question.

1
How to increase the output power for this audio amplifier?
2
MMIC RF Amplifier BGA2817 vs. Discrete Transistor/s Amplifier?
0
Transistors as switch and amplifier to control LED strip
2
Behaviour of Voltage on Base in a fixed BIAS Common Emitter Amplifier
1
How does a transistor make a signal copy?
1
Help understanding a simple amplifier circuit using a single transistor
5
Can a linear amplifier have finite bandwidth?