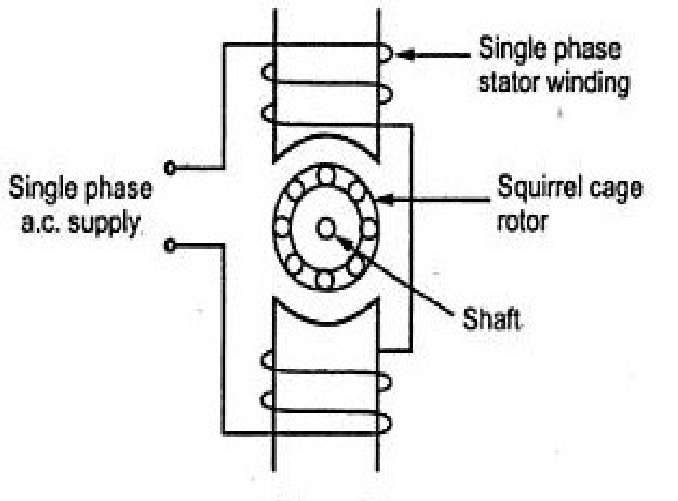 The rotor is not a permanent magnet, and it is not connected to the AC supply voltage: it is a brushless motor. However, due to the AC current in the main winding of the stator, an oscillating magnetic field is created, which induces an EMF in the rotor bars, driving a current through the rotor. By Lorentz Force law, a force and thus torque is exerted on the rotor.

I am now attempting to compute the torque in terms of angular speed of the motor. 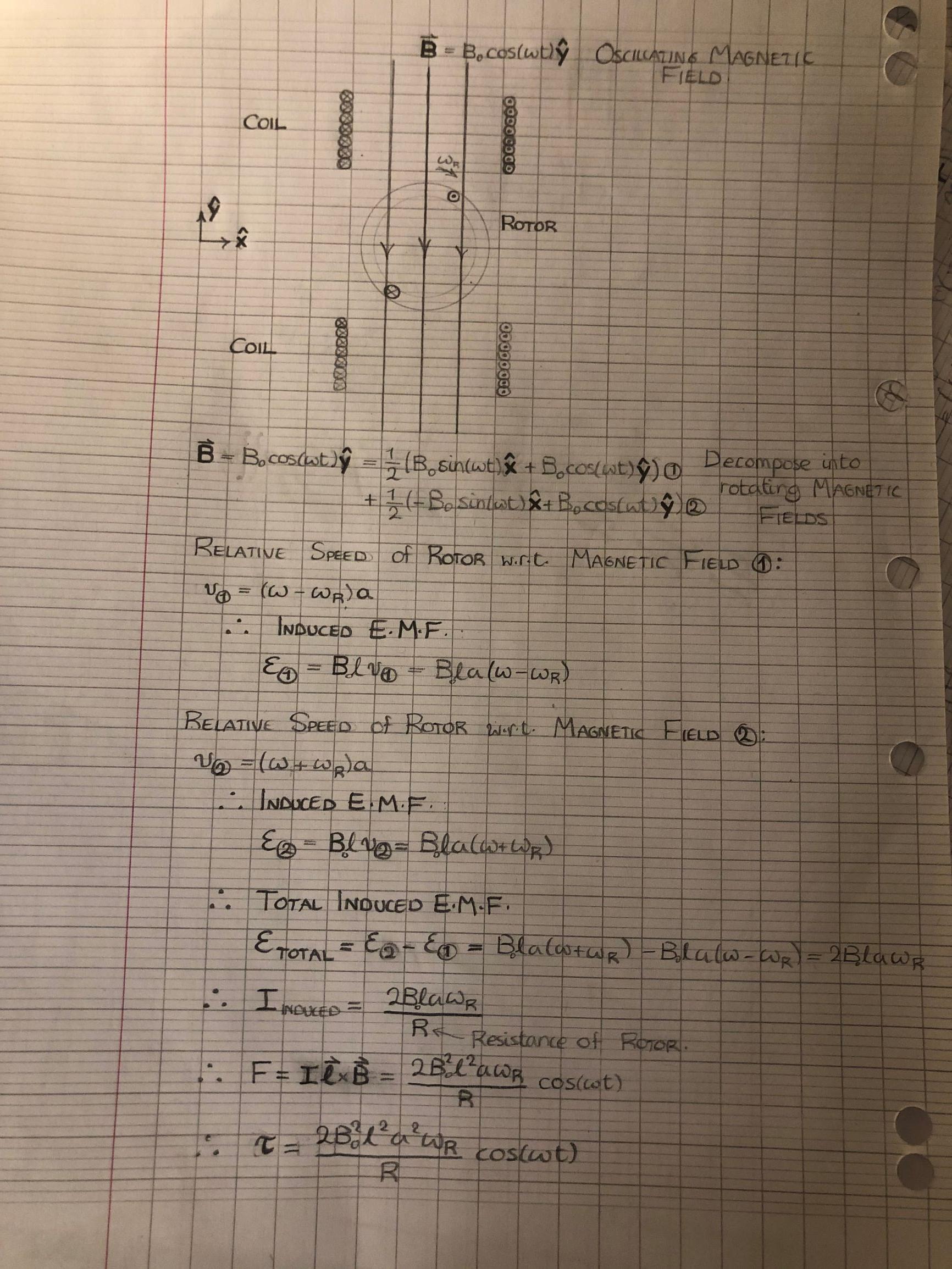 For low angular speeds this formula is at least qualitatively correct, it is expected that torque is linearly proportional to the angular speed of the rotor, but at the full load torque, the torque no longer varies linearly, but looks like the black line in the image (ignore the red and blue lines for now): 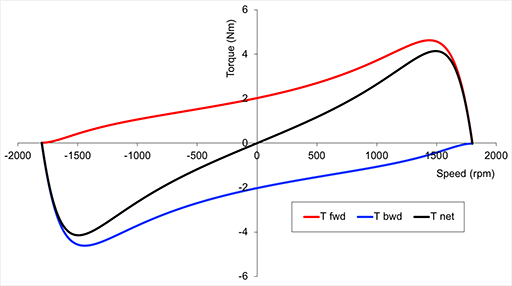 The cause of the torque no longer being linearly proportional to the speed is probably due to losses, and in the literature the rotor is modelled as a secondary winding of a transformer circuit, with the mechanical load on the shaft as resistance, and additional rotor reactance to model flux losses.

My analysis seems to miss out the zero torque near synchronous speed criterion. What phenomenon is responsible for this which I have not included?

My question is: within the context of Maxwell's Equations (physically), how can I calculate these losses using the geometry of the motor?

However, due to the AC current in the main winding of the stator, an oscillating magnetic field is created, which induces an EMF in the rotor bars, driving a current through the rotor.

My analysis seems to miss out the zero torque near synchronous speed criterion. What phenomenon is responsible for this which I have not included?

Although a transformer equivalent circuit is used to analyze induction motors, the EMF induced in the rotor depends on viewing the stator as producing a rotating magnetic field. The rotor emf requires a difference between the rotor speed and the speed of the stator field. Unless the motor is acting as a generator, slip has a value between -1 and +1. It is calculated as s = (n1-n)/n1 where n is the operating speed and n1 is the synchronous speed.

If you look at the equivalent circuit of the motor, you can see that the resistor that models the conversion of electrical energy to mechanical energy has a value of infinity when s = 0. When s = 1, the value of that resistor is zero. At hat point, all of the electrical power received by the motor is lost as heat in the motor. The majority of the heat is dissipated in the physical resistance of the rotor, Rr, a lot of heat is dissipated in the stator resistance, Rs, and the normal amount of iron losses are dissipated.

The torque at zero speed is less than the peak torque mostly due to the voltage drop across Xs and Xr due to the high current drawn by the rotor.

Note that the equivalent circuit below is for one phase of a three-phase motor. A single phase motor is a bit more complicated and essentially requires two such circuits that give you the red and blue curves in your diagram. 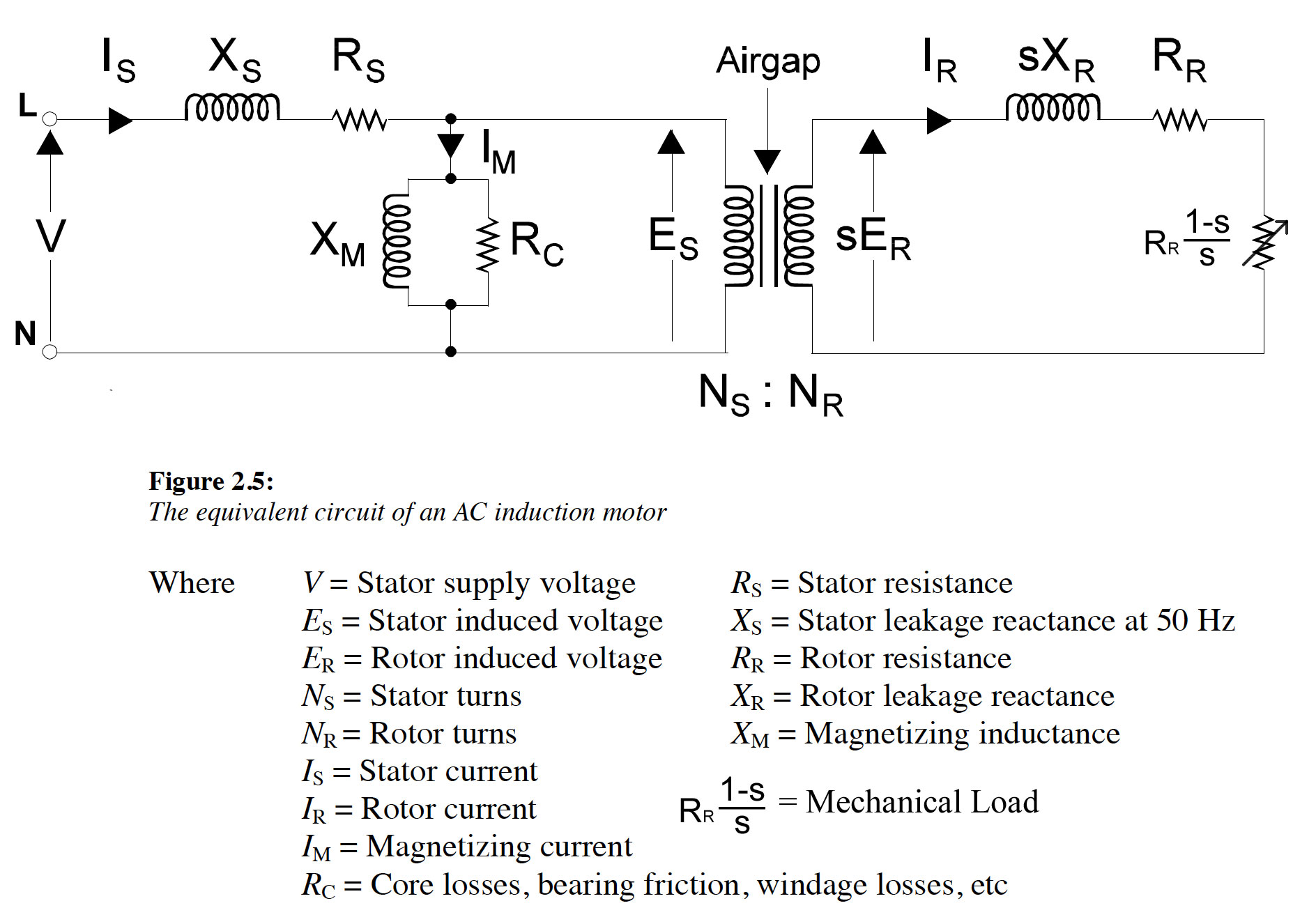 My question is: within the context of Maxwell's Equations (physically), how can I calculate these losses using the geometry of the motor?

That is not really what is needed.

Not the answer you're looking for? Browse other questions tagged motor electromagnetism induction-motor coil electromagnetic or ask your own question.

2
Skew angle in squirrel cage induction motor
1
3-Phase Induction Motor with winding heating provision
2
If single phase supply can not create rotating MMF, how does Induction motor generate torque?
3
Unexpected behavior of the Luenberger observer for three phase induction motor
0
Why can't I change the speed of an ininduction motor by changing the voltage?
0
What is the effect of stator magnetic flux on the rotor of Synchronous motor?