Why do we put transistors in logic gates? [closed]

I was recently doing some experiments on a breadboard and I decided to try to make a not gate with a single transistor. It worked. Then I tried taking the transistor out of the circuit, connecting what would've been the base and emitter together, and it still functioned. So why do we use transistors in logic gates? I thought it might be to keep the signal strong, rather than it weakening, or to get less resistance, but I don't know. I'm new to all of this, so sorry if this isn't a great question. So why must we include transistors in logic gates inside a computer?

Edit: Here's the transistorless schematic. I built it on a breadboard, and I might've translated it to a schematic diagram wrong, so please tell me if I did. Anyway, the only path for electricity is through the LED when the switch is open, but when it closes, it becomes the path of least resistance, and the electricity basically goes around the LED.

A transistor is a lot like a voltage-controlled switch.

Your circuit could hardly be considered a logic gate. Logic gates have input and output. Your output is the LED, but your input is manual, not electric.

You made a light switch in such a way that pushed means off, which in some sense could be called logic inversion, but it definitely isn't a logic gate.

If you replaced the pushbutton with a transistor in such a way that a high level on the gate/base would make it conducting, then it could be considered a logic inverter. Transistors essentially act like switches in logic circuits (but not in analog amplifiers).

Early digital logic did use diodes for the logic function, along with a transistor or two to restore the voltage levels. Google DTL and see what comes up.

The picture below, from Wikipedia, shows a early 1960's style 2-input NAND gate. 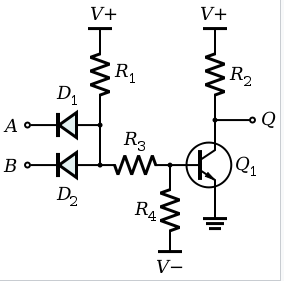 You can calculate any logic function using solely NAND or NOR gates, both of them require inverting signal. While you could implement AND and OR using diodes, you need a transistor for NOT. That is why transistors are essential for logic circuits.

The part about "making the signal strong" is also true, each gate restores the signal to keep it well shaped (rectangular). Gate called "buffer", which is generally two inverters connected together, is used for reconstructing signal.

But I have no idea what you did to your circuit to make it working without the transistor... (before the question was edited and schematic added)

Some early computers did essentially that...

Your circuit is a decent start to making computer logic, but it has a problem. The output is an electrical signal, but the input is mechanical. If you want to cascade the output to another level of logic, the input also has to be electrical.

You can move a switch with an electromagnet; this is called a relay. Now you can nest your logic as deep as you need! Some pioneering computers were built from relays:

(By the way, there is nothing special about using an LED as your output. Relay computers often used regular light bulbs as output devices. Although some early logic used diodes, it's simply not needed.)

It takes time to physically flip a switch, even if it is done electromagnetically. So relay computers were slow. They were outpaced by and lost market to computers built from vacuum tubes, which could switch at the speed of light.

When you flip a switch millions of times, it is bound to eventually break. Relays tended to jam.

Vacuum tubes also had reliability issues: they eventually burn out. However, it's a lot easier to spot a tube that is no longer glowing than finding a stuck relay. That's important when you are trying to track down which of the thousands of relays/tubes is making your computer malfunction.

Eventually, computers moved on to discrete transistors, then integrated circuits, each with better speed and reliability.

5
Going from Transistors to Gates to.....IC's?
3
LEDs with two transistors very dim
2
Transistor Logic Gates in One Breadboard
1
XOR with 3 different OR gates
1
How to build a sequential logic circuit with transistors on a breadboard
6
How many transistors are there in a logic gate?
8
Is is possible to create modular logic gates from transistors for teaching purposes?
0
Series and Parallel outputs simultaneously
0
Logic Gates using only conductive material