Why are the outputs of these gates tied together in the Apollo Guidance Computer?

In looking at the AGC schematics, I'm finding a lot of instances where the outputs of some of the NOR gates are tied together when feeding into another gate. The most dramatic example being here, where 4 NOR gates all have their outputs tied together.

More commonly though, the gates tied together look something like this: 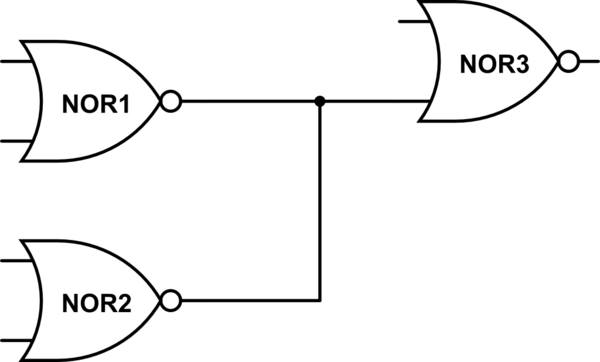 I can't imagine there'd be a reason for doing something like this in modern digital logic, since it seems like there'd be contention if one gate's output was low, and the other high.

So what's going on here, exactly? My first thought was that maybe it's some kind of "poor man's OR gate," allowing the next gate in the stage to see a high if at least one of the gates is high.

Is there some quirk with RTL logic that would allow it to work this way, or is the reason for this something else entirely?

RTL logic is open-collector, which allows the wire-OR connection (in this case, more precisely, wire-NOR.) The characteristic of wire-OR is that gates only drive low, so even if more than one is enabled, there is no clash. The gates share a common pullup resistor.

The AGC's NOR IC supports a 'fan in' mode, where they connect the gate outputs without connecting the pull-up. In other words, when they connect multiple gates in wire-NOR, they designate only one to have the pull-up resistor, all the others have their pullup resistors left open. This is done to reduce power, and to ensure that the low-drive loading is kept within spec.

Here's the AGC’s NOR IC pinout:

And here's how it's used in a schematic: 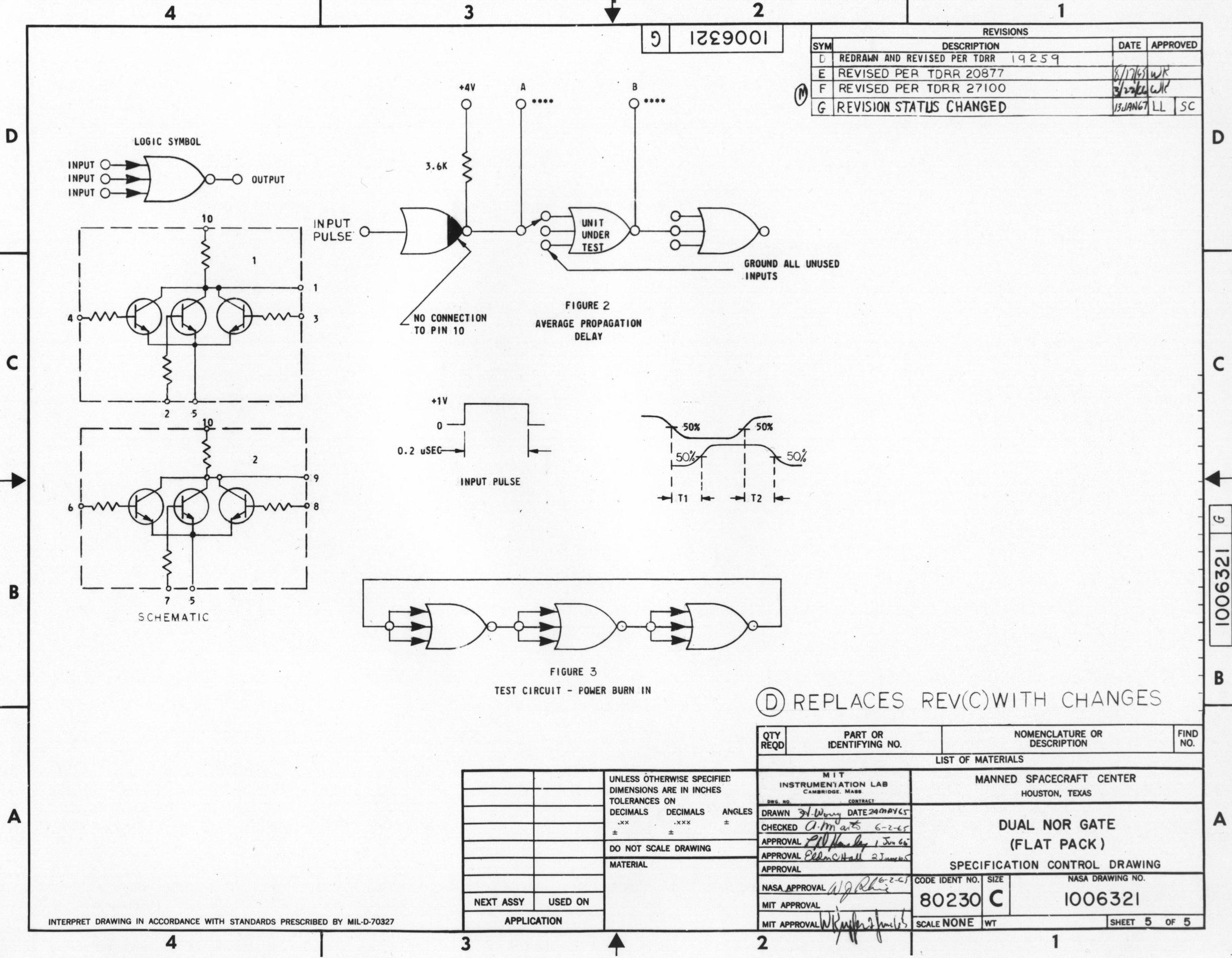 Pull-up vs. non-pull up are shown on the AGC schematics as follows:

(Why 'blue nose’? Because... copies from a diazo machine are blue.)

how is this any more "poor man's logic gate" than all the rest in RTL? Replace your logic gates in your diagram with the actual transistors and resistors, and you'll see that the output of a gate in RTL is "pull-down" logic.

Whenever either NOR1 or NOR2 outputs "low", the common node is pulled towards ground. This is a NOR gate, the way it's usually implemented in RTL, as far as I can tell.

@hacktastical's answer covers the fundamentals, but there are some more points:

In addition to well-known truths about this configuration, I will add a few more considerations. They are accumulated through the years when I was thinking how to reveal the truth to my students so that they not only know what it is but understand why it is made so...

Output quantity. Actually, the output quantity of an open collector stage is resistance; it does not produce voltage or current. So, its output is passive, "dead"... and this device cannot supply a load... it needs an additional voltage source (the same or else's power supply in series to the load). In logic gates, this "resistance" is zero or infinite and the transistor is considered as a switch.

Input flexibility. A great advantage of the wired OR "gate" is its flexibility - you can easily expand the number of inputs... and even vary it during the circuit operation without need of doing something more. A typical example of this configuration is the way interrupting sources are connected to the microcontroller IRQ input.

Perfect simplicity. I have put "gate" in quotes because it is actually just a node, point... i.e., nothing. Similarly, a "wired AND" is just a wire that we can cut at as many places as we want to include input "sources" (resistances, switches)... but this is not so convenient as the OR node. So, the OR "gate" consists of grounded switches (resistances) in parallel while the AND "gate" - of floating switches (resistances) in series.

The "problem" of the complementary output is that it can directly supply both ground and Vcc to the load which does not allow outputs to be joined. But still there are two situations when this connection does not lead to a conflict (short connection) between the outputs with opposite voltages:

2. "Forced" switching. Although it sounds unbelievable, it is possible for the outputs of two complementary stages to be connected even when they have different output voltages if two requirements are met:

An example of such a "brutal" control is the write operation in an SPAM cell. You can see more about this trick in my RG question.

It is interesting to explain the role of OR-ing diodes connected in series to the complementary outputs with the purpose to make them "open outputs".

You can see more about this explanation in my RG question.

Not the answer you're looking for? Browse other questions tagged digital-logic schematics logic-gates history open-collector or ask your own question.

3
What is the minimum number of NOR gates needed to implement a 2-input multiplexer?
0
Exotic logic gate
0
Can I use 1 resistor for both inputs of an RTL NOR gate?
4
How to chain transistor logic gates
1
Using 3-state buffers for multiplexing
0
How to find out if a binary number is zero or not using logic gates?
1
When do I need to use an OR gate IC?
1
Understanding the JK latch
0
Are the AND-OR and OR-AND forms of combinations exactly sum-of-products and product-of-sums?
11
What is this "flip-flop-like" circuit element from the Apollo Guidance Computer?