I’m planning to charge my 48V LifePo4 battery bank of some HV solar panels (Max 140V, MPPT @109V). Since I'm quite interested in the construction of power conversion electronics, I thought I would try out the DIY-route. It would be great if someone were to give me feedback on what the think about the converter I have come up with before I actually go about building it. How would you rate it between a 1 - will blow up immidiately to a 10 - has high chances of working as intended.

About the circuit:
I have more or less copied the average current control buck converter circuit as its described in the paper down below. I have added an PI voltage control loop to be able to limit the voltage though. I also added a safety relay which should isolate the battery from the output in case the mosfets fail as shorts or something else catastrophic happens. I have simulated the circuit in Falstad, although I'm not quite sure whether my results are realistic or whether im missing some vital parasitic effects. The end goal is to control the Max_Cur_Ctrl_PWMInput, Max_Volt_Ctrl_PWMInput with an Atmega 328 to do some rudimentary MPPT tracking (only input voltage)

I have considered implementing a reverse-flow shutdown using the current signal (since the hall current sensor is bidirectional). But then I gave the whole situation a thought: if the PV input drops out, the battery wont get charged anymore and its voltage will drop below the voltage setpoint. This means the circuit will ramp up the PWM duty cycle to 99%. This means the input cap will be charged to about the output voltage (60V max). At this voltage, the SMPS providing the 15V to the circuit will drop out (min 80V, tested), so the IR2104 will shut off the MOSFETs.

EDIT: I also wanted to ask whether the MC6004 is a good choice for my opamps. I chose it because its cheap and has R2RIO which I need for the triangle oscillator. UPDATE: After some simulation, the MCP6004 seems to be fine for the PI controllers, but completely inadequate for the triangle generator (too slow slewrate, too low GBWP). Im currently looking into relacing it with a TSH74 opamp. 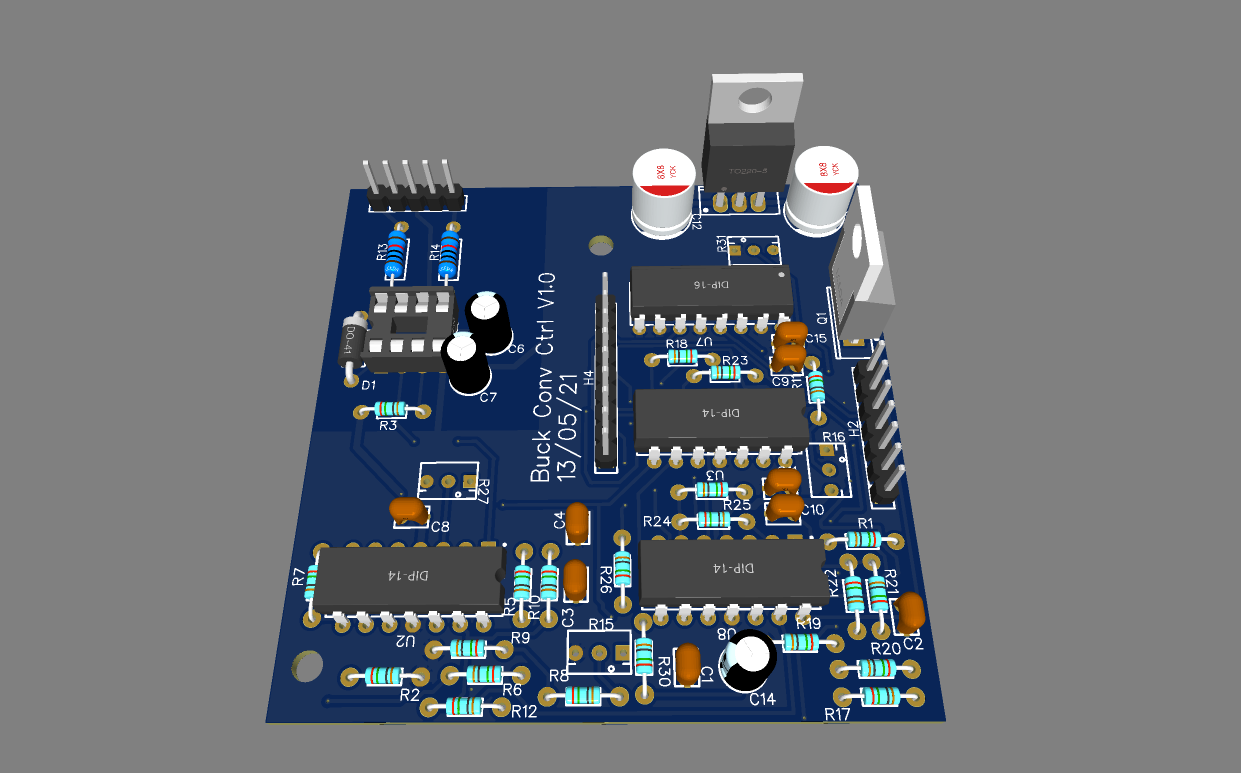 EDIT: How the zeners will be placed on the mosfet 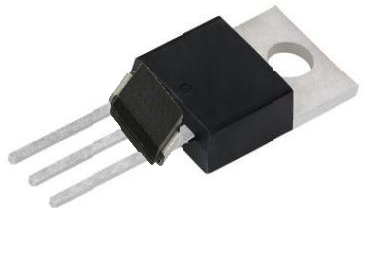 I manually tested all combinations of input voltages (109V; 150V) and loads (CC [1Ohm load], CV (open circuit), max power[2.5 Ohms]) with hard transients and all voltage and current limits of the components chosen were met.

EDIT: Falstad Simulation of short-circuit(100mOhm). I realised that I will need a fuse of ~ 30A to cope with the capacitor discharge burst. But the MOSFETs should be fine (rated at 180A burst). 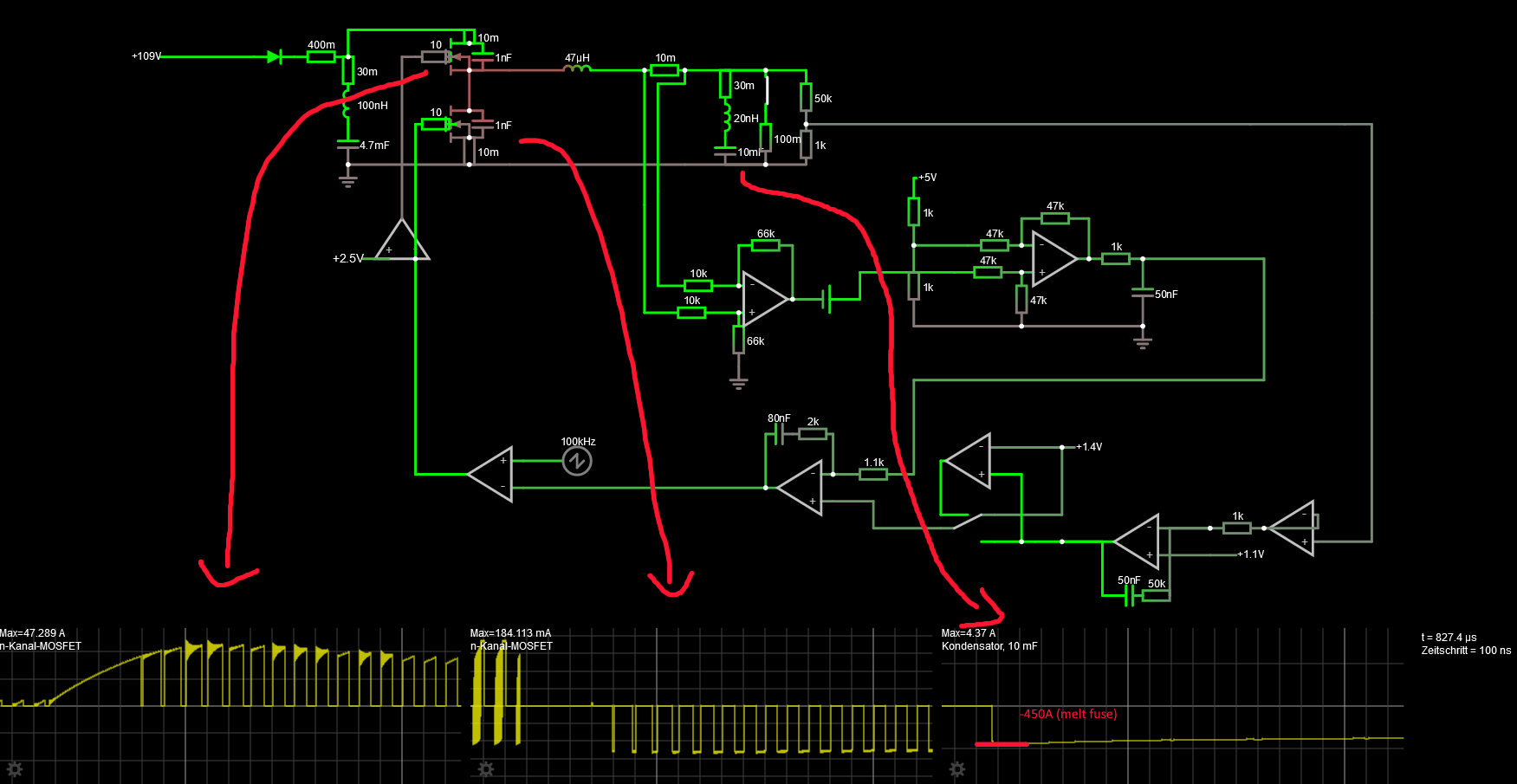 battery-charging buck pid-controller
Share
Improve this question
edited May 20 at 14:15
MeMyselfAndI
asked May 12 at 21:46

The schematic looks nice, but it sure is over-engineered!

Also there is no short circuit protection.

Last time I made a similar circuit was a while ago, that's how it went:

I used a hysteretic buck current source. Since I used low voltage that was a current sense amp, but you could use a faster Hall effect sensor. The output of that feeds a hysteresis comparator that controls the FET driver. So when output current is too high, it turns off the top FET. When output current is too low, it turns on the top FET. This regulates current to an average that is proportional to the comparator threshold, and switching frequency depends on hysteresis and inductor value.

Being a current source, it is inherently short circuit protected and will run into a short indefinitely.

I then used the ENABLE pin on the FET driver to control it. That was implemented in software, but it could also be done with a bunch of comparators. When output voltage reaches the desired value, it turns off. When the battery needs charging, it turns on. Same for input voltage to keep it at the maximum power point: it turns off when input voltage drops below the maximum power point, and turns back on when it rises. You could also control the hysteresis comparator threshold to modulate the current instead of using on/off control.

It's a pretty simple circuit because there is no compensation and the control loop is dead simple.

Then I had a problem which you will perhaps also encounter: the FET driver I used (ADP3120) would not start if the bootstrap capacitor was not charged. In your case, the output of the DC-DC is connected to the battery, so it is above the +15V from your aux supply. Thus, the bootstrap cap will not charge through the bootstrap diode. To charge it, the driver must turn the bottom FET ON. But my driver could not turn the bottom FET on if the bootstrap cap was not charged! This was solved by pulsing the MOSFET that, in my circuit, did the same thing as your output protection relay, which disconnected the battery, allowed the output voltage to drop to zero, and charged the bootstrap cap. Then, the driver would start, and with a 1µF bootstrap cap, it would stay awake even during the off-periods when it was not running for a millisecond or two because the target output voltage had been reached.

Some FET drivers will turn on the bottom FET when the bootstrap cap is not charged, but some will not, they'll just stay off and do nothing. You need to check datasheets for that, or you'll get a surprise.

I put a MOSFET at the output also to prevent current from flowing back from the battery into the source. You'll have to switch the relay to do the same, or the leakage current of the solar panels will be a drain on the battery, plus the battery will power your circuit through the 15V supply even at night.

Note the control algo is much simpler to implement with a microcontroller. The hysteresis comparator did the fast stuff, and the rest is pretty slow, so it can be done with software and an ADC. I used the micro's analog comparator for overvoltage protection, so if the battery is removed while the micro is in debug mode and software is not running, it still stops the PWM driving the ENABLE pin of the FET driver, which means the 6.3V cap on the output does not get shot into orbit with 40 volts.

You also need plenty of surface mount MLCC caps on the input and output, because the large caps you used have substantial inductance. Also check they can take the AC ripple current you'll use. For the input, AC ripple current is equal to the full output current. For the output, it's your inductor ripple current. The FET driver also requires solid decoupling with MLCCs.

You could use a FET with a lower gate charge, too.

More stuff while looking at the schematic:

I had not realized the power MOSFETs were not on the board. That will increase the gate drive inductance, which will require larger gate resistors to prevent oscillations, slowing down switching and resulting in lower efficiency. It will also increase inductance everywhere and generate more EMI. Also you can't use SMD MLCCs to decouple the power rails, which means trouble. Combined with wiring inductance, I'd expect large voltage spikes which will blow the FETs.

As drawn on the schematic, with no decoupling, I would be very surprised if it works.

A better solution would be to use a 4 layer board, which costs 20€ these days. You can put the FETs on the board, and use power and ground planes for the input and ouput.

You can also solder fat copper wire on the board, so you don't have to pay extra for thick copper. That way you get low inductance from the planes, and high current handling from the thick wire.

Also there is no decoupling on the FET driver (10µF electrolytics with several ohms ESR do not count as decoupling). So when it tries to switch the FETs, its VCC will spike down, and it may bias the FETs somewhere in linear mode, which will make them dissipate a lot of power.

Since the huge input and output caps have high inductance and low ESR, they will resonate with the MLCCs at a frequency close to your switching frequency. Since one 5600µF input cap will never be able to take 20 amps ripple, it would be simpler to use many lower value caps, which lowers the inductance, the ESR, and increases ripple current handling. You will still probably need another cap in between, for example a low ESR electrolytic with lower value and low inductance, or a 10µF MLCC with a small resistor in series. The impedance of the capacitor combination should be simulated accounting for PCB inductance to make sure it will not cause a resonance peak.

Duty cycle will be around 50%. You don't mention the current, so I'll take the 20 Amps value in the schematic. At 10 mOhms RdsON, that's 4W conduction losses total, so 2W per FET. This means it is not necessary to use a high inductance TO-247 package. A low inductance SMD FET will allow faster switching, so it will have much lower switching losses.

IR2104, which has a wimpy output current of 210mA, should be replaced by something much beefier and much faster. Even more so if you keep your FETs with huge gate charge.

IRF200 needs 50nC of gate charge to go through the switching zone, with 210mA current that's a whooping 250ns, which means about 25W switching loss per FET. So you need a big heat sink.

The top SMD FET is easily cooled since its drain is in a power plane. The bottom FET has its drain on the SW node which should have low capacitance, so it can't be a big heat sink. An elegant solution would be to just put some "thermal jumpers" between the SW node and the ground plane. These "thermal jumpers" are small ceramic chips with two solderable pins that conduct heat very well. For example, 4°C/W for 0612 size. So you need two or three. They are sold at inflated price under the name "thermal jumpers" but they really are SMD resistors without the resistor film on it, so you can put in high value (megohms) resistors instead, which costs nothing.

Once the heat has been transferred to a plane that doesn't have 100V 100kHz square wave on it, then you can slap a heat sink on your board, and it won't act as a wideband radio jammer.

Or you could use a TO-220 FET as a compromise. It has higher inductance than the SMD, but it's easier to cool. Since switching loss is the killer here, it's all about Qg and package inductance.

Not the answer you're looking for? Browse other questions tagged battery-charging buck pid-controller or ask your own question.