I'm building a full analog chorus-effect pedal. My schematic is based on that of a Rockman X100 headphone amp, designed by Tom Sholz. In this schematic, there is a 2nd order low pass filter that looks like a variant of a Sallen-Key low pass filter, but I have never come across a topology like this.

Can someone help me to derive the formulas for calculating the frequency, gain and quality factor? 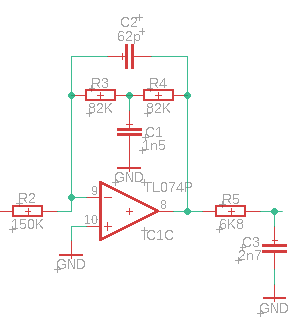 link to the original schematic: https://www.dropbox.com/s/3kii0qlqiwtoosj/rockman-x100-and-soloist-schems.pdf?dl=0 It starts on page 2 underneath the 'Stereo Chorus' title.

That's followed by a simple RC low-pass filter (2nd stage) that I'm sure you can work out. It should be set to a frequency a little higher, but not too much higher, so as to add another \$20\:\text{db}\$ per decade of roll-off. It will impact \$Q\$, a little. But I didn't want to bother with the derivatives I'd need to work it out for the 3rd order transfer function, so I left that for you.

That's not in standard form. But at least it's right.

As I wrote earlier, you can easily work out the transfer function for the 2nd stage and then apply it to the above.

It's more interesting to do this, though:

Mostly the same approach. But now producing the same results I'd mentioned at the outset.

I chose to set the voltage at the (-) input to the 1st stage opamp to \$0\:\text{V}\$ for the analysis. I did not forget to deal with KCL for that node. But the node voltage doesn't show up as a variable, since it isn't variable. (Not enough to bother with, anyway.)

Added: I didn't comment about interpreting the transfer equation for the first 2nd order stage, as I assumed you know the details well enough (from what I saw in your writing.) You can see that the numerator indicates a low pass plus a bandpass. Sallen and Key do cover eighteen different types of passive structures; those they felt were important. But not this one. (They did say that others were possible, of course.) So I'm not sure you could call this a Sallen & Key.

Also, it's wonderful to see the different perspectives your question generated. So I'm up voting your question. You have a lot to work with. (Though so far as I can see no one took on the question of the overall equivalent 3rd order \$Q\$.)

Added again: Forgot to mention that the schematic you show doesn't have a resistor at the (+) opamp pin, to ground. It's usually better to include one that helps deal with bias currents.

Making the capacitor a little larger will make the resistors a little smaller. You get the idea.

The above procedure has the advantage that it doesn't force you to select a specific \$\gamma\$ or \$\rho\$, in advance. It lets those flow out of natural decisions regarding available rationalized values for capacitors and resistors, instead, and proceeds to a design-end that achieves the frequency and Q.

The difference is that the input resistor in the multi-feedback low-pass amplifier feeds to the middle of your T network instead of directly to the (-) input.

Still, you'll find there that the design process again starts by selecting a value for your \$C_2\$. They then develop a value for your \$C_1\$ next, in a fashion not unlike multiplying by \$4\,Q^2\$ (see the meaning they use for \$\alpha\$ to recognize this.) They then let the resistors fall out from those early steps. This is unlike what the designer of your schematic did in setting \$R_3=R_4\$ as an early step. But I think Analog's process could be adapted, similarly.

I'm curious if your schematic has an accepted name. The input resistor in the configuration shown on Analog Devices' document impacts the voltage gain. In your case, it doesn't, and instead represents the input impedance. This modification seems almost too obvious, in hind-sight.

(And it most certainly does not look like a twin-T notch. See page 105 from the PDF link above, to see why.)

These are very good answers and let me add mine considering the rainy day in Occitanie : ) I am using the fast analytical circuits techniques or FACTs as described in my book. The principle is quite simple: determine the natural time constants of the system when the excitation is turned to zero (a 0-V \$V_{in}\$ source is a short circuit). These natural time constants give the poles of the circuit. Then, check the presence of zeroes and apply the null-double injection or NDI. The process is quite smooth as you will see.

Here, we have an active filter followed by a passive low-pass version. Considering a null output impedance driving the \$RC\$ filter, we can safely decouple the two transfer functions and concentrate on the first one with the op-amp.

First, set \$s=0\$ and open all the caps. In this configuration, the dc gain is that of a simple op-amp-based inverter (infinite \$A_{OL}\$). Then, replace the input source by a short circuit and "look" through the capacitor's connecting terminals to determine the resistance \$R\$. That resistance combined with the considered capacitor forms the time constants \$\tau=RC\$ we want: 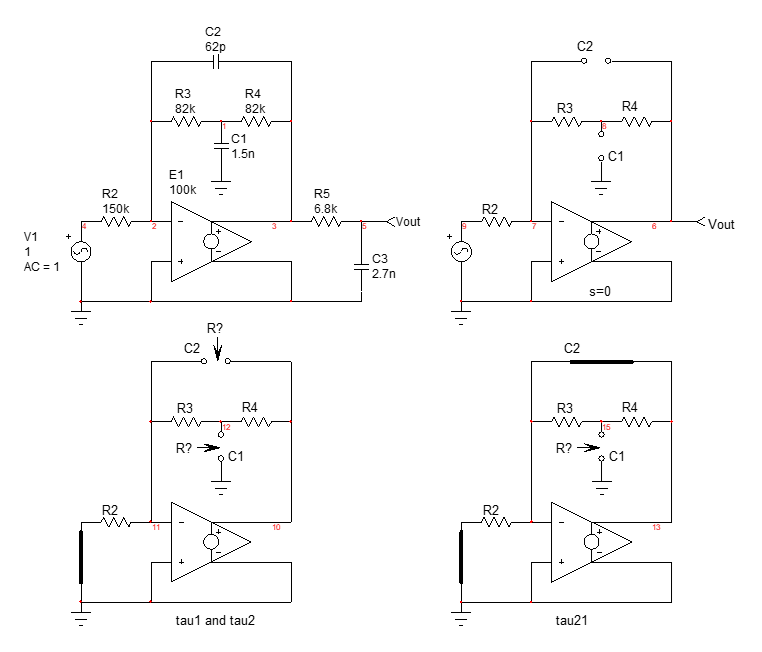 The capacitors are temporarily disconnected and alternatively put in their dc state (open circuited) or high-frequency state (a short circuit). Considering a perfect op-amp and an infinite open-loop gain, you can inspect the circuit and obtain the expressions without writing a line of algebra and this is way cool.

For the zeroes, how can you know if there are zeroes in this active filter? Well, just alternatively set each of the energy-storing elements in their high-frequency state and check that a stimulus applied at \$V_{in}\$ would produce a response. If it does, you have a zero. If not, you don't:

A simple dc operating point with SPICE confirms that \$C_1\$ contributes a zero to the transfer function while the two (or three) other caps don't (output is 0 V for the two cases). To determine the zero, let's apply a null-double injection or NDI to this circuit: 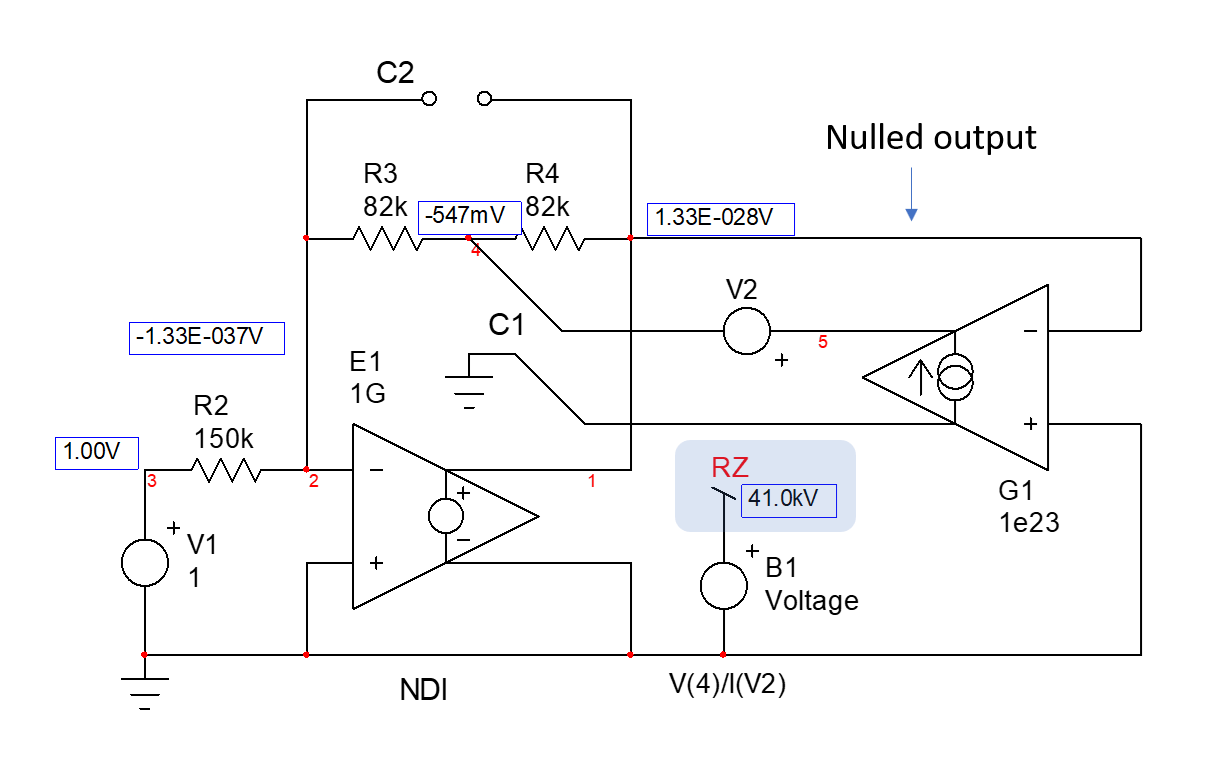 You can see, again without a line of algebra, that the resistance seen from the connecting terminals is simply the parallel combination of \$R_3\$ and \$R_4\$. You can infer this result by considering the 0-V output voltage which implies also a zero bias on the inverting pin. Both \$R_3\$ and \$R_4\$ opposite terminals are therefore grounded and the junction offers a resistance \$R=R_3||R_4\$.

This is it, we can now assemble all these results in a Mathcad sheet, rearrange the final expression in a convenient second-order normalized form and there we are: 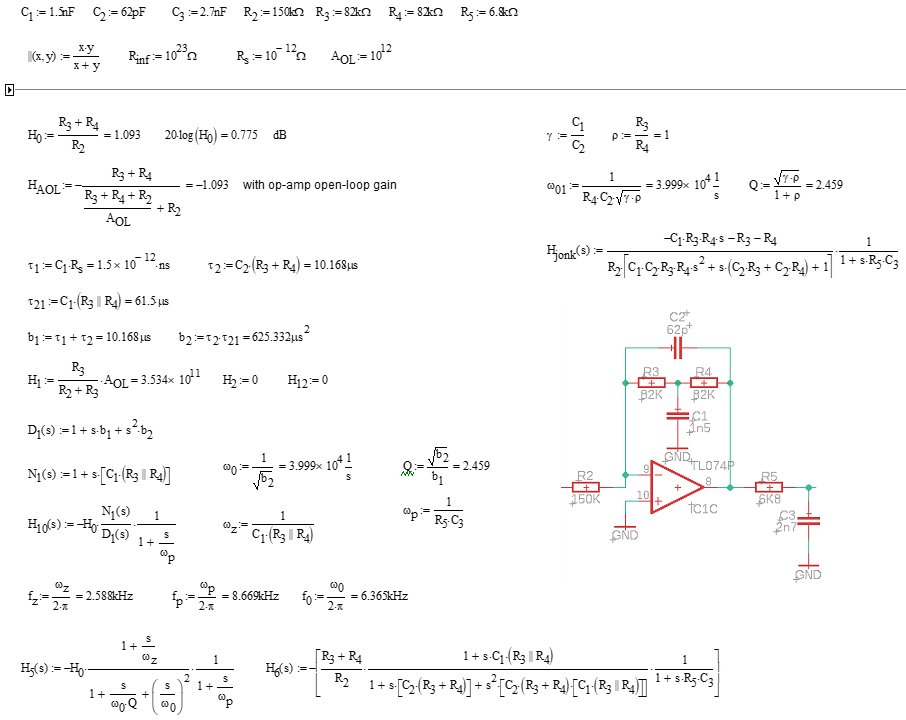 And it you plot my expression against that of jonk, the magnitude and phase response are identical:

Therefore, it is not a classical 2nd-order lowpass and also not a bandpass (both in multi-feedback topology). It is rather a combination of both with a peak (of app. 15 dB) around 6 kHz. The DC gain is app. 1.1. Above the peak the magnitude drops with 20 dB/dec only (due to the bandpass function with \$a\cdot s\$ in the numerator) and the max. phase shift reaches -90° (-270° in total due to the inverting opamp).

When you compare the denominator \$D(s)\$ with the general form it is a simple task to dermine the pole frequency and the pole Q.

Comment: When the resistor \$R_2\$ is connected to the common node (midpoint) of \$R_3\$ and \$R_4\$ you have the classical 2nd-order lowpass in multi-feedback topology.

So, it is NOT a Sallen-Key variant - all S&K filters have fixed gain stage (positive or negative gain)

That is not a simple lowpass filter, it is a Bridged-T notch filter in a negative feedback loop, followed by an 8.7 kHz single-pole lowpass filter. The T network produces a peak in the circuit's frequency response. The narrowness and height of the peak are determined by the ratio of C1 to C2. I've seen this configuration as a low-distortion oscillator.

Not the answer you're looking for? Browse other questions tagged operational-amplifier filter low-pass sallen-key or ask your own question.