I need a single-pole circuit breaker for a 200A, 48V DC battery bank powering a solar inverter. The batteries are LiFePO4 and capable of large short-circuit currents on the order of 10 to 15 kA. Large molded-case (MCCB) breakers are available with 200A rating and typically 20kA Icu (breaking) rating, but I am having difficulty finding a suitable enclosure. Can I use a DIN mounted 4-pole 50A interlocked breaker with the 4 poles in parallel? Even though this seems like a common case, I am unable to find any trustworthy answers. 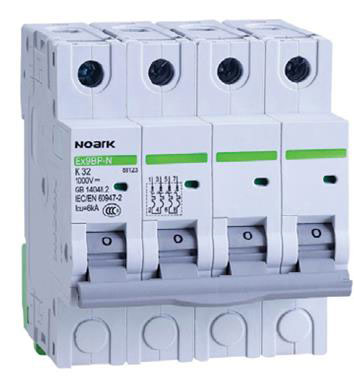 The 4P breaker has an Icu rating of 6kA, is non-polarized, and is typically used in high voltage solar PV applications where the DC interrupting voltage needs to be up to 1000 VDC, so the breakers are arranged in series. This means that the breaker has 4x the I2R loss is series. Parallel power loss through 4 breakers would be 4*1/(4^2) = 25% of the series power loss, so that seems fine from a power dissipation (e.g. thermal) standpoint. The question likely comes down to the 6 kA Icu rating and how that works in parallel with interlocked breakers. 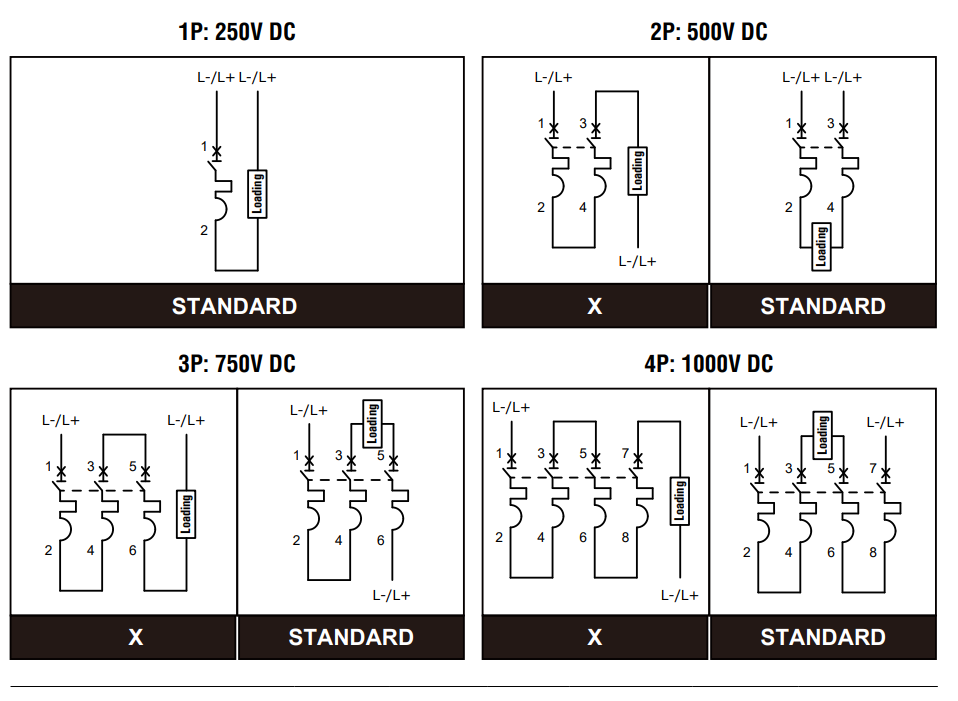 No, you shouldn't do this. The problem is that the breakers won't share current equally because they're not totally identical and their contact resistance might vary[1]. This means that one of them will trip much faster than the others, causing their total current-carrying capability to be much lower than expected.

Additionally, the four breakers won't open at the exact same time, which means that one of them will momentarily carry all of the short-circuit current and therefore exceed its rating.

[1] The contact resistance is somewhat random every time the breaker is operated (due to arcing and contaminants being "smeared" across the contact surface when operating) and it will also change with temperature, vibrations, oxidation or just on its own. Here's a bulletin by Schneider Electric about the topic: https://download.schneider-electric.com/files?p_enDocType=Data+Bulletin&p_File_Name=0600DB1901.pdf&p_Doc_Ref=0600DB1901

Don't use cheapos or misapply equipment when the right stuff is readily available.

As far as enclosures, they provide the enclosure for you - not only for the main breaker but for branch circuit breakers which tap the 200A supply.

The neat thing is, they're readily available in any home store in the US or Canada for sane costs. For instance:

The North American style "spaces" system provides a master "bus" which then delivers bussed power to each of the branch breakers. Thus there is no need for wired interconnections between the main and branch breakers, or even "comb buses". Further, it totally satisfies enclosure needs, and the breakers simply "snap in" (and you twist out a section of the metal cover to allow the breaker handle to stick out the front).

The common residential panels provide for two separate "hot" phases - so for instance this could be used in a DC system to separately breaker-protect both positive and negative (breakers on each). Or it can be wired with a "common", and all the needed busing and terminals are provided both for common and separately, safety ground.

The separate common/neutral, and ground, is not a feature of every North American panel, but it is for QO.

Thanks to trade treaties, many countries honor certain other countries' safety certifications, provided they are reasonably comparable.

In North America, there are two parts to it and UL has two roles. First as author of the standard (UL White Book as comparable to IEC standards, in fact they are working to harmonize them. UL 67 is the part that applies to service panels).

Second (and UL has competitors here*) as the physical inspector of the production. First, the manufacturer sends test articles to UL for physical inspection and exhaustive functional testing (including setting components on fire to see if they emit toxic smoke). And second, UL does spot inspection of factories to assure that actual production does match the approved test articles. Only this results in a UL listing.

And then the "UL Listed" logo, with the inspection file number, is placed right on the equipment label. 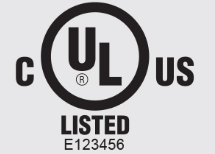 So it's rather easy to get the file; just read the file number off the equipment label and ask UL or Schneider (Square D) for it. UL has http://www.ul.com/database behind a signup-wall, but Home Depot has this.

Schneider can also tell you to what extent their panels meet IEC standards. Noting that UL 67 is a great deal more encompassing than any one IEC standard, since it covers enclosures as well. They market products all over the world.

* A list of competent testing labs is curated by US OSHA, and is relied on by agencies in many countries. Some of these correspond to trade treaties; for instance CSA, BSI and TUV are "national" testing labs of Canada, UK and Germany, and they are on the list. Likewise Norwegian Nemko, Swiss SGS, etc.

Not the answer you're looking for? Browse other questions tagged dc parallel circuit-breaker or ask your own question.