The circuit below is the beat frequency oscillator in a superhet receiver. Q1 is a Colpitts oscillator whose output is buffered by Q2. C3 is a trimmer to fine-tune the frequency. 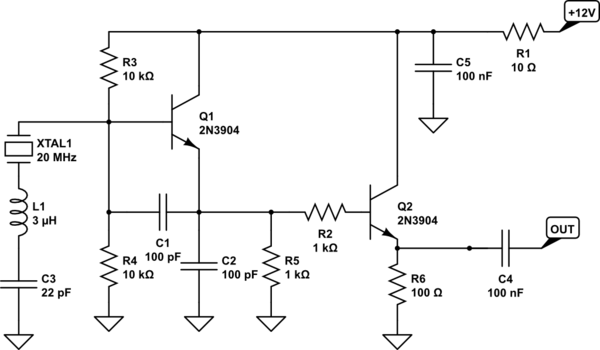 The circuit oscillates at the expected frequency of about 20MHz, but the output amplitude is very unstable and jumps around randomly by at least an order of magnitude, seemingly without provocation. It's also too low: I'm getting about 3-30 mV(rms), and I'd need about 300 mV at least. How can I predict the output amplitude of this oscillator, and what can I do to obtain a more stable and higher amplitude?

Another thing I've noticed is that the oscillator around Q1 produces a relatively pure sine wave if I cut it off at R2, but as soon as I add the amplifier stage, it gets significantly distorted. Can I do something to fix that? And Q2 runs quite hot.

This question is related, but I'm not sure the advice given there applies in this situation:
How to increase the amplitude of a colpitts oscillator circuit?

Some experiments based on KD9PDP's suggestions. I got a bit more consistent amplitudes of about 200mV today, so there could be a problem with some of the earlier measurements. It's possible I didn't always have the correct load on the output (if it wasn't just the weather). Nevertheless, I still need to increase the amplitude by at least 50%.

Increasing C1 has little effect on the output up to at least 570 pF (100+470 parallel). The amplitude changes by no more than about 10%. After adding 2.2 nF in parallel to C1, the oscillation doesn't start.

After increasing R6 to 1k, Q2 goes into cutoff and distorts the negative half wave. However, I can get away with raising R6 to 390\$\Omega\$ before distortion sets in, and then Q2 stays noticeably cooler.

Eliminating R2 also causes cutoff and distortion for all values of R6 I tested.

Increasing the ratio of C1 to C2 should help increase the amplitude and stability. Also, I'm not sure if L1 is needed since you have a crystal. You can use it to tune a little bit, but I think it could make it unstable (or at least limit the range of stability a little bit)..

In measurements after posting the question, I observed a more stable amplitude of about 180-200mV(rms), so I suspect there was something wrong with the original measurements, although I don't know exactly what. However, even so, the output amplitude was too low and, as a result, the receiver had very poor sensitivity.

Based on the advice I received, I tried varying the C1/C2 ratio by changing either or both of them, but this didn't affect the output by more than about 10% for any of the values I tried. When I changed the values too much, the circuit stopped oscillating.

Together, these two measures increased the output amplitude to about 300mV, which substantially improved the sensitivity of the receiver, so I'm happy. Increasing R6 also reduced the heat dissipated by Q2.

R2 was left untouched as eliminating it caused distortion in Q2. So did higher values of R6.

I kept L1 because I found it difficult to tune the oscillator precisely to the correct frequency without the inductor.

Not the answer you're looking for? Browse other questions tagged circuit-analysis oscillator or ask your own question.

2
How to increase the amplitude of a colpitts oscillator circuit?