Is it OK to create a negative rail just by dividing voltage with resistors?

I want to build some circuits to learn about op-amps, and so I would like to set up a negative rail.

Are there any problems in creating a negative rail by using an 18 V bench supply and then simply dividing the voltage using, say, two 10 MΩ resistors and setting ground to the mid-point so I have +9 V/GND/-9 V?

Please keep in mind that I am a newbie when it comes to electronics!

EDIT: In further reading guided by all the kind and helpful responses I received here, I just want to signpost to other newbies that there is a great overview of the implications of using a voltage divider as a power source in The Art of Electronics, Horowitz and Hall 3rd Ed Section 1.2 on the Thevenin equivalent circuit

Good question that is great for new people to electronics to think about!

Let's look at that circuit: 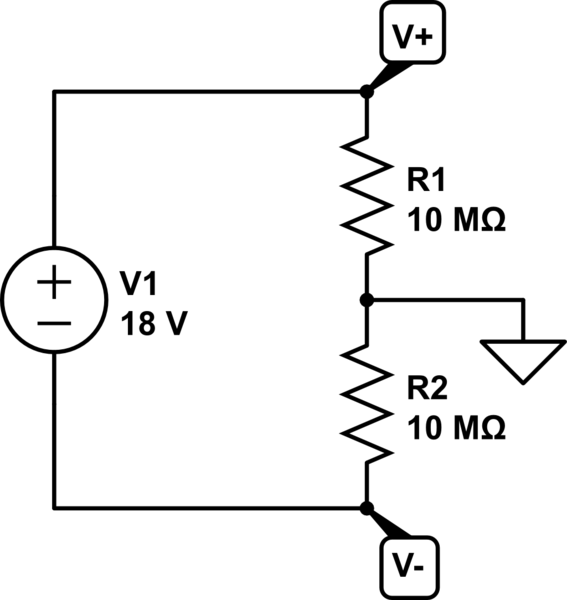 You can think of that as two supplies, a positive and negative supply, and the Thevenin equivalent of each independently looks like: 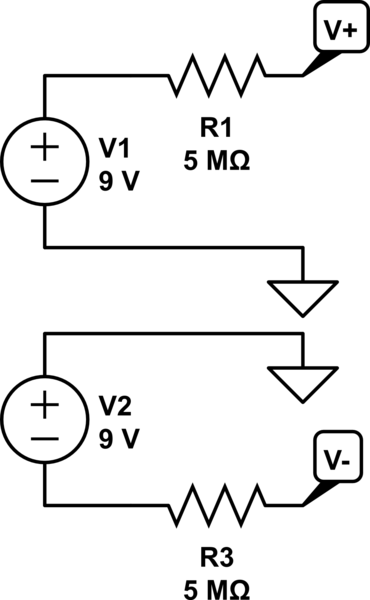 (In reality you can't consider them independent, but just for illustration here, you can see the effect. In reality, both the voltage source and output impedances are functions of what the other polarity's load is - which is complicated.)

So you can see, that's not that great of a voltage source - the output impedance is way too high. As others have suggested, you can use an op amp buffer. Just make sure that the resistors are chosen such that the current through them is 10 or 100x more than the input bias current of the op amp you choose.

EDIT: See comments, I added R3 so that capacitive loads are less likely to cause oscillation. You can also add decoupling capacitors between V+ and virtual ground, V- and virtual ground like you would in a standard power supply.

First problem is that creating a new midpoint voltage (the would-be 0V ground in your circuit) with 10Mohm resistors has very high impedance, so it would be quite unusable as a ground return. It would have to be buffered with an op-amp to have any reasonable sinking or sourcing ability for any input or output terminal that uses the ground as current return path. Compare that to two separate 9V batteries creating the full 18 volts, there would be a relatively low impedance 0V ground if you used two 9V batteries to generate +9V and -9V supplies.

Another problem is that the power supply output would have to be floating. It may not reference the output 18V to any other equipment, including mains earth/ground. When it is floating, this is possible, then the divided half-voltage can be the 0V ground for any external circuits. However, if it happens that for some reason the power supply output is not floating, but it for example connects the negative output terminal to mains earth ground, then unfortunately it means your device would use 9V referenced to mains earth as ground and it can't be connected to a say computer that expects 0V to be same potential as mains earth ground.

You can do this, but you need to check your impedances. If the "-9V" is going to supply power to an opamp, how much current can it get through a 10MΩ resistor? Answer: Not much!

Look at your opamp current consumption spec, and design your voltage divider to allow that amount of current to flow without a significant voltage drop. And then also check the power in those resistors, you'll probably need to use some 1W or there abouts.

There are better/more efficient ways of doing this, but this is a simple dirty way of making a split power rail.

yes of course but the impedace of your new virtual ground will be fairly high. Your can either amplify it to lower the impedace 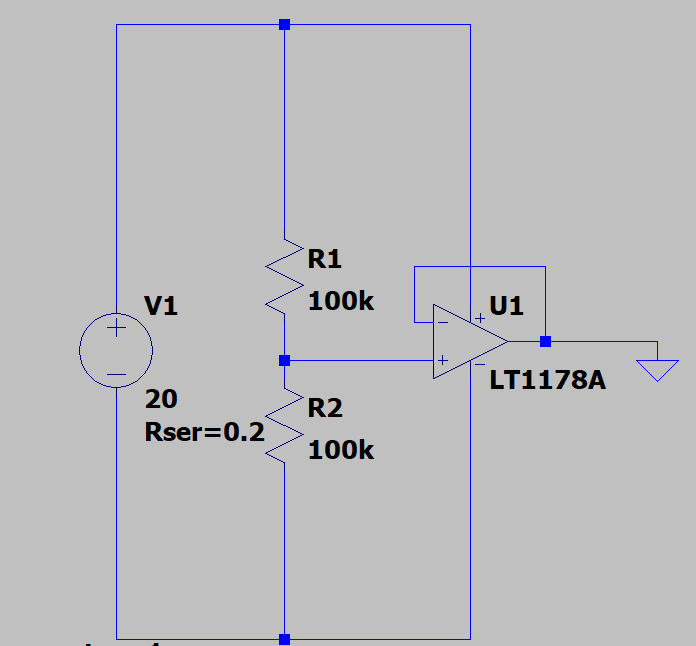 or use e.g. a so called "rail split transistor" (TLE2426) witch does essentially the same.

In addition to the other answers (put a buffer after divider to create virtual ground), a common tactic that is somewhat simpler is this:

For ac signals such as audio, instead of splitting the supply, you can move the signal up to the dc midpoint voltage. To do this feed the signal into a large value resistor divider via a capacitor.

Not the answer you're looking for? Browse other questions tagged operational-amplifier voltage-divider negative-voltage or ask your own question.

0
How do I create ground voltage for my op-amp?