What is the simplest and safest way to automatically make/break a ground to neutral bond in a mobile AC system?

I have an inverter/charger unit, with features I want, that is not typically used in an RV. It (unfortunately) does not automatically make/break a ground to neutral bond. I would like to automatically do this anytime shore power is connected to the RV. (As required by electrical codes).

I experimented with a 2 NO 2NC electro-mechanical relay with the coil connected to incoming 120V shore power. For the test, I ran a ground to neutral bond through one of the NC contacts, so that when shore power was not present, the bond was made. This appeared to work. When energized, the bond was broken, when de-energized the bond was restored.

But the coil could fail someday, and the manufacturer said it should fail in its normal state, not its energized state. I understand that is not a certainty, and therefore will deal with that issue separately. But for those reasons I also tested having shore power run through one of the NO contacts. That way if it the device fails and the ground to neutral bond is not broken, power is also not passed through to house loads.

When testing this, the coil began bouncing and no power was passed through the contacts. I called the manufacturer who stated that you can not power an EM coil with the same source that you're running through the contacts. The coil and and contacts are normally isolated, but by using the same source for both, you've now effectively created a jumper between them, which results in constant vibration/bounce, much like old AC doorbells use.

That being the case, in a chassis fault scenario where ground becomes hot, the coil would again be connected to the same source as one of the contacts, so it appears a contactor like this can not be used for this application.

I am therefore exploring alternatives. One option may be solid state relays, but does anyone know for certain if they will have this same issue? I see many for sale on Amazon boasting "switch the fan on when you turn the lights off," and other similar statements suggesting the SSR input and output can be connected to the same source with no issues. Is this correct?

Please note, I appreciate words of caution, and I am being careful. I am testing everything with full protective gear on a bench.

Here is the system's wiring diagram, but I had not yet drawn a diagram for the contactor that I was planning to use to make/break the ground to neutral bond It's the large yellow box with text on the lower right. (update: separate drawing is now included). I originally tested with the coil powered from 1 leg of the 120V utility hot (the one that will always be powered when using either single phase 120V hookups or when using split phase 120/240V hookups), and that same leg went through the contactors NO contact and then connected to the AC breakers in the diagram. That way if the coil's NC contact failed to break the ground to neutral bond when on shore power, no power would even reach the breakers, and I'd know to replace the contactor. But this didn't work in bench tests and manufacturer says it won't ever. 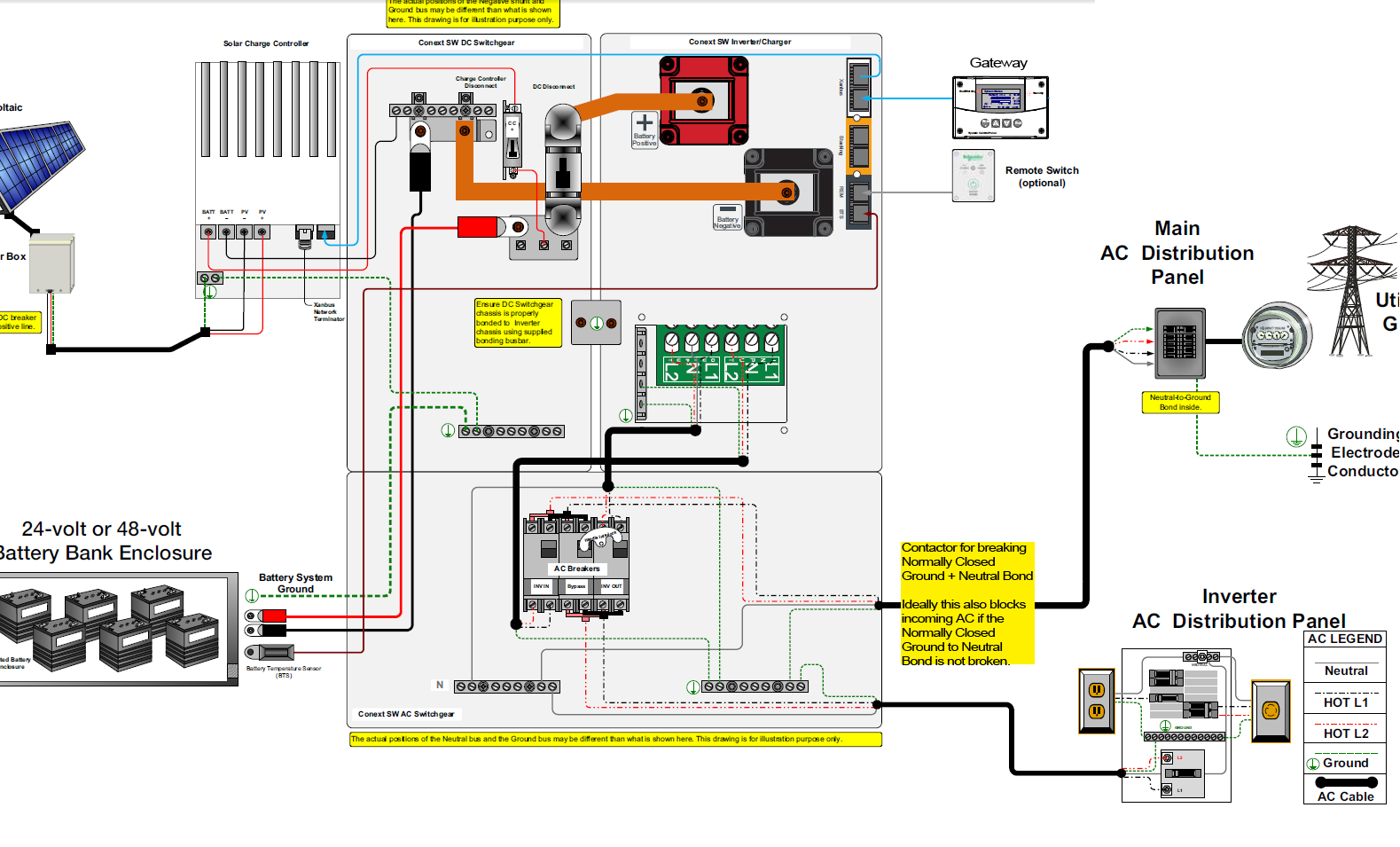 Update: I've added a drawing. Please understand my diagram skills are still limited, and I was trying to draw the device using the only available objects in EasyEDA's library. I also wanted the orientation to match the Contactor's diagram and my wiring. EasyEDA does not indicate when a wire jumps over another, so near R2 you'll see I tried to make the typical jump shape, but if there is no red node, then it means there is no connection. Please also note the Vehicle Chassis Ground to Neutral connection via R1 and R2 is mandatory code for RV power when not running on shore/main utility power. There is no debate over this. Where I have a circuit breaker and load drawn below, that is where the incoming power arrives at the AC Switchgear pictured above, then out to loads. But I included a simple CB and load below to complete the drawing. 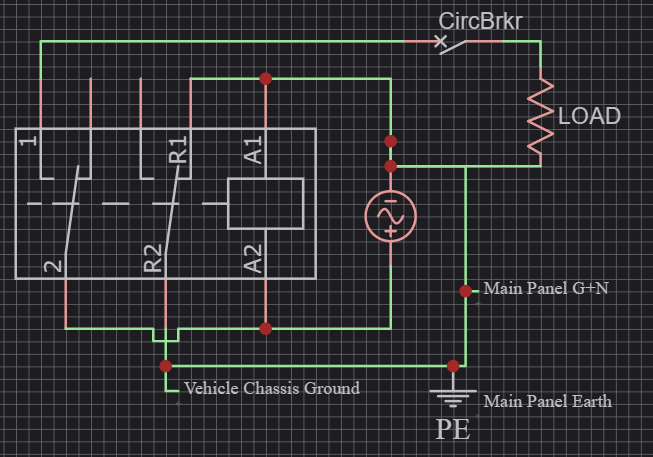 Here is also a drawing of the front of the Contactor. You'll note its 4 pole, but I couldn't find a 4 pole in EasyEDA, so I used the next best thing. 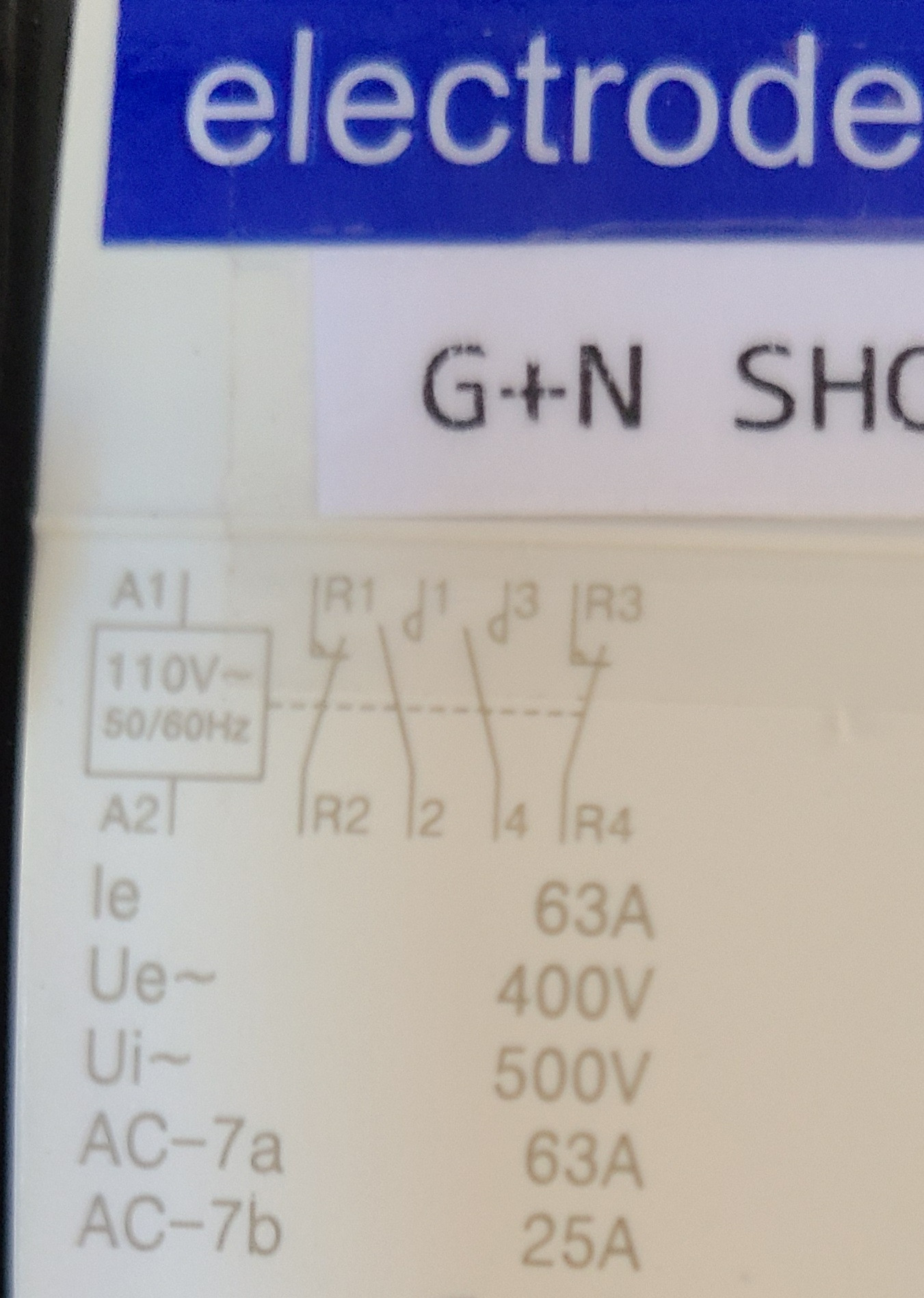 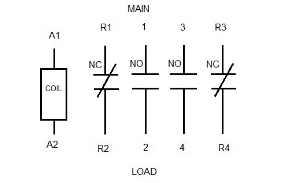 You identified that if this GN contactor were to fail there would be no other protection from improper grounding. You would like some redundancy if this contactor failed to open properly.

You could implement the following:

On the left is the Shore power plug that provides a Line, Neutral, and Earth Ground connection. On the right side is the RV's internal 120Vac circuits.

To reduce the wire spaghetti I have broken up the RV Ground-Neutral contactor into a separate coil (inductor) and NO and NC switch. See the labels in the schematic.

Contactor M1 has 3 NO contacts (I had to add a third contact), when no shore power is available the connections between the shore Line, Neutral, and Earth ground are disconnected from the system. The RV neutral and chassis ground are connected.

This ensures that the RV ground-neutral contactor opens before the shore line is connected. If the GN contactor fails to open the Shore power will remain unconnected to the RV.

The following circuit should work if your inverter/charger unit has separate connections for inverter-out and charger-in.

When shore power is available, the Neutral and Ground of the RV AC distribution system are "unbonded". (Provided their only connection is through the relay.)

[The schematic only shows one "Live" line. If there are two live lines, L1 and L2, are used, you will need a larger or separate relay to disconnect the inverter from the shore power, when shore power is available.]

I ran a ground to neutral bond through one of the NC contacts, so that when shore power was not present, the bond was made. This appeared to work. When energized, the bond was broken, when de-energized the bond was restored.

But the coil could fail someday, and the manufacturer said it should fail in its normal state, not its energized state. I understand that is not a certainty, and therefore will deal with that issue separately.

In the circuit above, if the coil fails, then the shore power L1 will remain disconnected to the RV power L1. [There is another possible failure mode of relays, which is that the contacts become welded together. If this should happen, the RV can still draw from the shore power, but cannot supply power to the shore (or the RV) from the inverter.

When testing this, the coil began bouncing and no power was passed through the contacts.

I have still not seen an accurate circuit diagram of how this test was made. My guess is that there is a problem with design/wiring. There are problems with the diagram you have provided, which are discussed in my answer to your other question.

I called the manufacturer who stated that you can not power an EM coil with the same source that you're running through the contacts.

You most certainly can power the coil of a relay with the same power you send through the contacts, provided the coil is rated for that voltage. If you are getting a constant on-off oscillation, it may be due to mis-wiring. That is, the "door-bell" effect you are seeing is possibly due to the fact that the relay is wired such that when the coil is energized, it opens contacts that break the circuit powering the coil. The coil then de-energizes, closing the contacts, allowing power to be applied to the coil again, and the process repeats. This is a design or wiring issue, and in no way negates the fact that a relay can be powered by the same power source that is applied to its contacts. It just has to be done right.

The concern here is basically the risk of an upstream neutral fault?

The really right solution is probably an isolating transformer (Plastic cased) right behind the external feed, and treat the entire secondary side as a separately derived supply with no connection to the shore power earth at all.

This is what I do on the boat, as marina shore power is an utterly random shit show, and between this and being able to tap change on that transformer I can cope with most things and do NOT get electrolytic corrosion issues.

However, a boat does not have (providing you mount it low down) a serious issue with a few tens of kg of iron and copper.

A lighter approach for an RV, would be a three phase RCD (GFCI) wired with live neutral and external earth thru the three phase contacts, this does NOT function as a conventional RCD (So you need a two pole one as well) but it does detect the presence of current in the earth that is being driven externally and trip the entire line off in this situation (All three conductors). This is essentially what a PEN fault protection device for EV chargers does and that might be the easy way to get the gear.

As from you picture, the incoming supply has L,N and PE. You may not bond N and PE together, they must be separated. You can see from your pic. that there is no N to PE bond present.

The N and PE bond shall be made when the incoming supply is consisted of L and PEN wire, then you make this bond and separate N and PE. After this point, no additional bonding is allowed, they must be separated for the entire system.

Now there should be a standard way to connect a mobile object by means of standard plug. Therefore the L and PEN as form 2nd diagram is to be excluded, since this type requires the fixed connection done by electric company. Only the 1st diagram is possible for mobile, where N and PE is already separated. I want to make you clear that you shouldn't be messing around this bond connection. Find a standard solution instead. 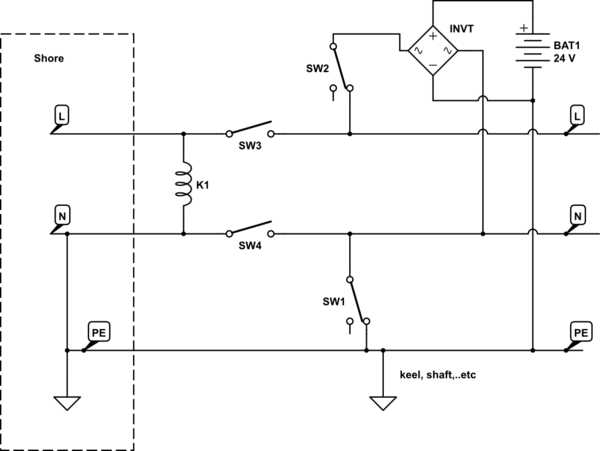 -2
How do you prevent feedback in a relay or contactor (120V coil, 120V contacts) when coil and contact are both connected to one source?

0
Convert mechanical relay to solid state relay
0
What happens if there is a fault in the neutral wire between the grounding pole and the centre tap of the transformer?
6
How does residential electricity work?
0
Diagnosing a chattering AC fan relay
1
Some power across a relay even when open?
0
Does connecting neutral to chassis (bootleg ground) rise chassis potential to main's voltage with respect to ground?
3
Why is there not lots of current flowing on a house’s grounding electrode?