What is wrong with my circuit and how can I fix it?

This circuit used to work before I soldered it. When I initially soldered it, I used a 6V battery and it was oscillating, but the speaker was very quiet. I went with a 9V battery and I re-soldered some other parts because the speaker would still not produce any sound. As well, the LED would have a voltage of around 8V on its turn while the speaker would only have around 0.03V on its turn (this stayed the same even after I switched their places and even replaced them). Right now, the speaker makes no sound and the LED (which previously flashed up with each oscillation) no longer flashed either. I checked with a voltmeter and voltage was still there across the circuit and across the loads. I can assure you that no soldered part is touching another (I know this cuz I've spent a day looking at them). I don't know what to do make the circuit function and for the speaker to make sound, please help. 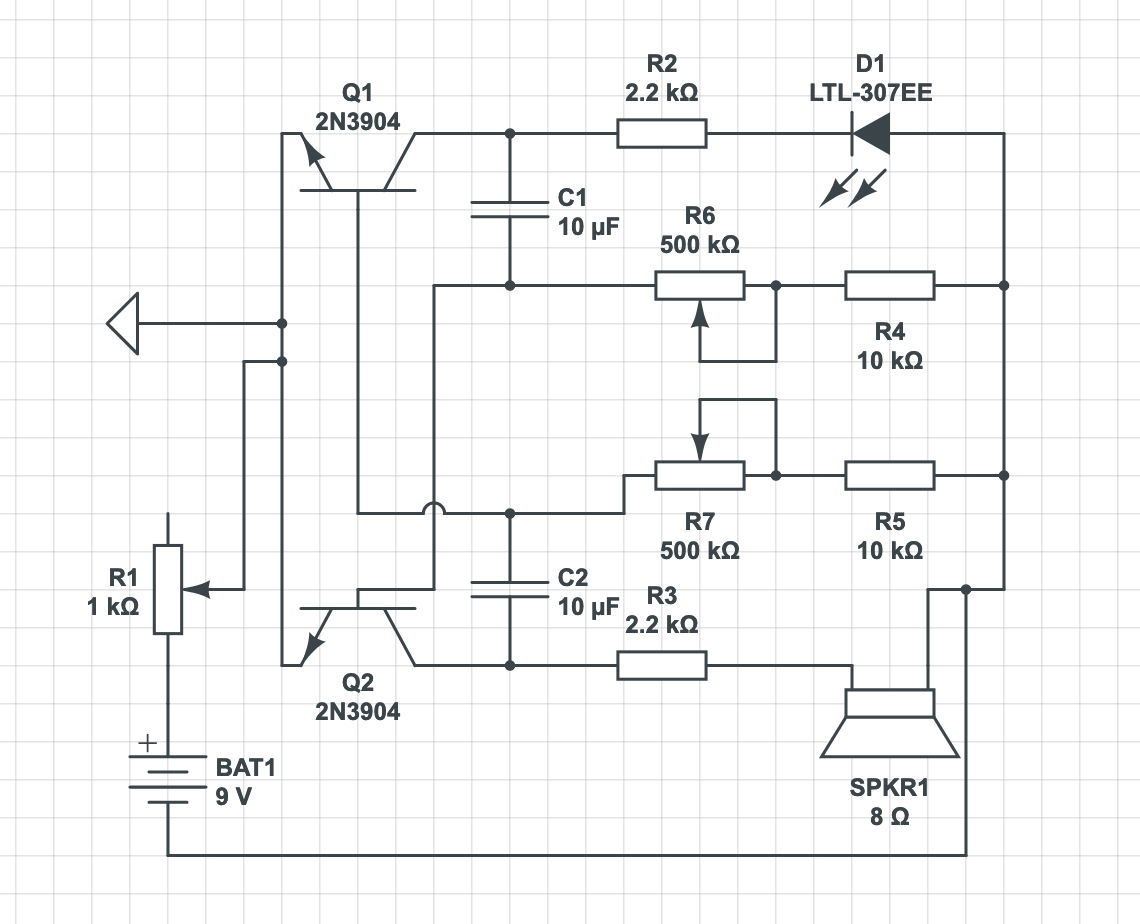 For loud sound you cannot drive the speaker through such a high impedance like 2k2. Also, your oscillator works at too low frequency (10Hz if pots are down) so it acts like a DC signal.

The circuit I attached below oscilates at about 1kHz and drives the speaker with higher power so the sound should be louder. Try to change C3 a little if necessary.

Not the answer you're looking for? Browse other questions tagged oscillator soldering speakers multivibrator astable or ask your own question.

1
Maximize performance LM386 and 4Ohm speaker
0
Convert a [0,5]V wave to [-2,2]V wave
0
Convert Metronome circuit to Visual Metronome (LED blinker)
0
"mapping voltage" on an analog potentiometer using a voltage divider
7
Adding Diodes to Transistor Astable Multivibrator; 1N5818 Schottky diodes work but 1N4148 diodes don't; can't figure out why
0
How to set the initial conditions of an astable multivibrator
0
Solder paste and perfboard/prototype board/donut board destroying the circuit?
0
Why can't I get any output when a speaker is connected to my common-source amplifier?
1
How can I build a current controlled 50% duty cycle oscillator from two CMOS inverters?