Here is a table which shows the différence between GaN and SiC:

I have no knowledge about physics of components. I have just some bases. In the above table I do not see real difference between SiC and GaN. Nevertheless, it is said that GaN is better than SiC in power electronic field. If it is the case, based on this table, why the properties of the GaN are better than the SiC in the field of power electronics/SMPS?

SiC and GaN address different sectors. GaN is an often superior replacement for Si superjunction MOSFETs in the ~600V segments (mains switchers / rectifiers). As an example you could read about Google's Little Box Challenge from 2015, which was dominated by teams using GaN technology. SiC is best for higher utility voltages that GaN can't (yet?) address. I believe SiC excells at very high powers due to its thermal properties, such as locomotive and replaces IGBTs and to some extent tyristors.

SiC are MOSFET or JFET with SiC instead of Si. These transistors are rather similar to traditional Si, but with better properties in many respects. I hope this image from Mitsubishi Electric is sort of correct in capturing the essential benefit of using a wider bandgap material:

Namely, you can reduce the drift layer thickness because the breakdown electric field is larger. That leads to a lower resistance per device area. This in turn allows you to make the transistor smaller laterally for a given power which reduces gate capacitance for the same power. This in turn allows higher frequency or higher efficiency. Another advantage is the lower reverse recovery parasitics for SiC but I don't know why.

GaN transistors are substantially different, being usually HEMTs and not MOSFETs. Nevertheless they are controlled with a gate voltage. Their gate charge is very low for the same power allowing very high frequencies while still offering rather high breakdown voltages, albeit not as high as SiC. They also conduct in reverse, mimicking the body diode aspect of traditional 3-terminal MOSFET, but have no reverse recovery, as the reverse and forward conduction path are identical. 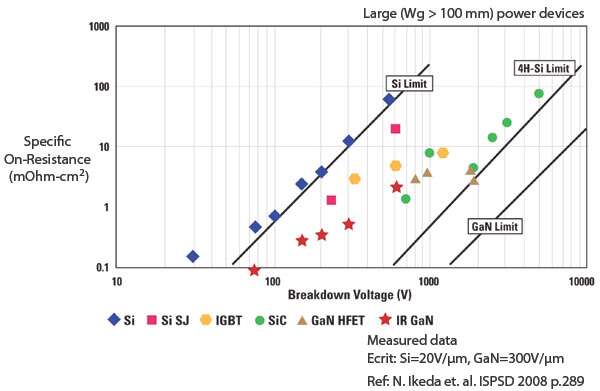 Graphics like this show that the theoretical figure of merit is better for SiC than for Si, and better yet for GaN. But I don't know exactly how this is calculated. Presumably the logic is the same as in the image above. Higher breakdown voltage allows you to reduce the drift thickness. Factor in the drift layer resistance and you can calculate such a figure of merit. But this also skips over other important metrics, such as reverse recovery and device type. For example, the whole drift layer argument does not really apply to HEMTs. This graphic seems to indicate that either GaN is still far from mature or that a HEMT is inferior to a MOSFET for power switches, in case the material allows both. 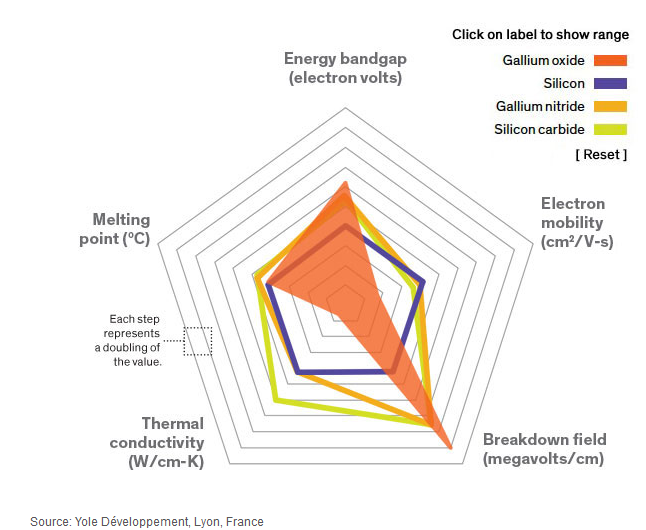 Whether this translates into better devices with one material over the other remains to be seen, at the end of the day designers care about specs like rdson and gate capacitance (how fast you can switch the device). These specs are determined by material, but mostly by design and construction. It would be more useful to compare specs of devices rather than material families.

Perhaps the most obvious difference is that GaN is a direct band gap semiconductor, whereas SiC features and indirect band gap. GaN will therefore be preferred in light-related applications, such as LEDs.

GaN devices often achieve higher switching frequencies compared to SiC, which in case of SMPS means smaller inductors/capacitors for the same power. I struggle to relate this fact to physical properties though, it could be a purely technological limitation which could no longer apply to future generations of SiC/GaN devices.

I would also point out the differences in the two last rows of your table: doping and thermal oxidation. GaN is problematic with p-type dopants (more defects, less yield), so you rarely see GaN diodes or p-channel FETs. Thermal oxidation also seems to be problematic, which limits the use of GaN in complex multilayer chips. So GaN is by no means "better" than SiC, each material having its own strengths and weaknesses.

There's a good article in the April 2021 issue of IEEE Spectrum (https://spectrum.ieee.org/semiconductors/materials/gallium-oxide-power-electronics-cool-new-flavor) that addresses this issue, though in the context of Gallium Oxide semiconductors. Here's what I gleaned from that article (note, I am not a device physicist).

Most of the advantages of materials like GaN and Gallium Oxide come about because of their higher bandgap voltages, 1.12 V for Si and 3.5 V for GaN. This allows them to withstand higher voltages than Si (hence their usefulness in switching power supplies and as RF amplifiers). The higher bandgap voltage also allows smaller device geometries (such as channel length) with the same applied voltage as Si, which means higher speeds and frequencies are possible.

Not the answer you're looking for? Browse other questions tagged mosfet diodes power-electronics semiconductors physics or ask your own question.

1
Transformer dimensioning for SMPS (not the Aw Ae way)
4
Why does isolation transformer protect from shock?
3
How do I calculate the voltage drop over a diode OR gate?
2
Can we replace an embedded system design with a general purpose computer or a smartphone?
0
High Frequency Transformer Configuration for an Electronic Circuit Voltage Supply
6
GaN & SiC piezoelectricity problematic?
11
Why won't this DIY transistor attempt conduct
0
Arduino Fan Control: BJT vs MOSFET
0
How to limit power going into a resistive load originally connected to AC mains