I am trying to create some redundancies for a small commercial ice maker to prevent there from ever being a flood in my garage. The ice melts from the ice bin (which holds around 80lbs of ice) constantly and gravity drains from 3/4" PVC into a condensate pump a few inches away… If/when the condensate pump fails, I plan to have a float switch open, breaking the connection at the DPDT relay and turn off the ice maker (to prevent more ice than what is already in the bin from being created) as well as close the newly installed inline motorized Taco zone/ball valve. Any melting ice will then stay in the ice machine with the valve closed. The Taco valve would also close in a power outage (being that the valve is N/C) so that the ice did not end up melting and draining with no power to run the condensate pump.

So I think I have that all correct, but was wondering if I should try to build in a 2nd float switch to prevent any chatter at the motorized ball valve and not sure if there would be negative consequences if the ice machine ever received 'flickering' power? I think the situation I would need to worry about the most is an extended power failure that turns the ice in the bin to water... When the power comes on, I fear the condensate pump would have trouble keeping up with a mass flow of water (although it is a 270GPH pump with 1G tank). My assumption is there would be several 'trips' of the float switch as the pump worked to remove all the water. My thought was installing low and high float switches on the condensate pump. The ball valve would close and ice machine turn off when both switches were open and the ball valve would open and ice machine turn on when both switches were closed. Not sure how that would be wired though???

My other thought, and this may actually be a better solution is to just use one float switch, but if the float switch ever opens it would essentially 'trip' the circuit (closing the ball valve and turning off the ice machine) and require a manual reset. This really seems ideal to me as someone would have to be present to inspect why the float switch was triggered... I have absolutely no idea on how to best implement this (with my limited electrical expertise). I've seen latching relays mentioned from Google searches, but I am unfamiliar and not even sure if that would be the best approach. Any ideas on how to accomplish this would be very helpful!!!

FYI: Ice machine pulls around 5-6amps at 120V. Ball valve does around max .5 amps at 24V. Planning on also using the 24V transformer for relay(s). 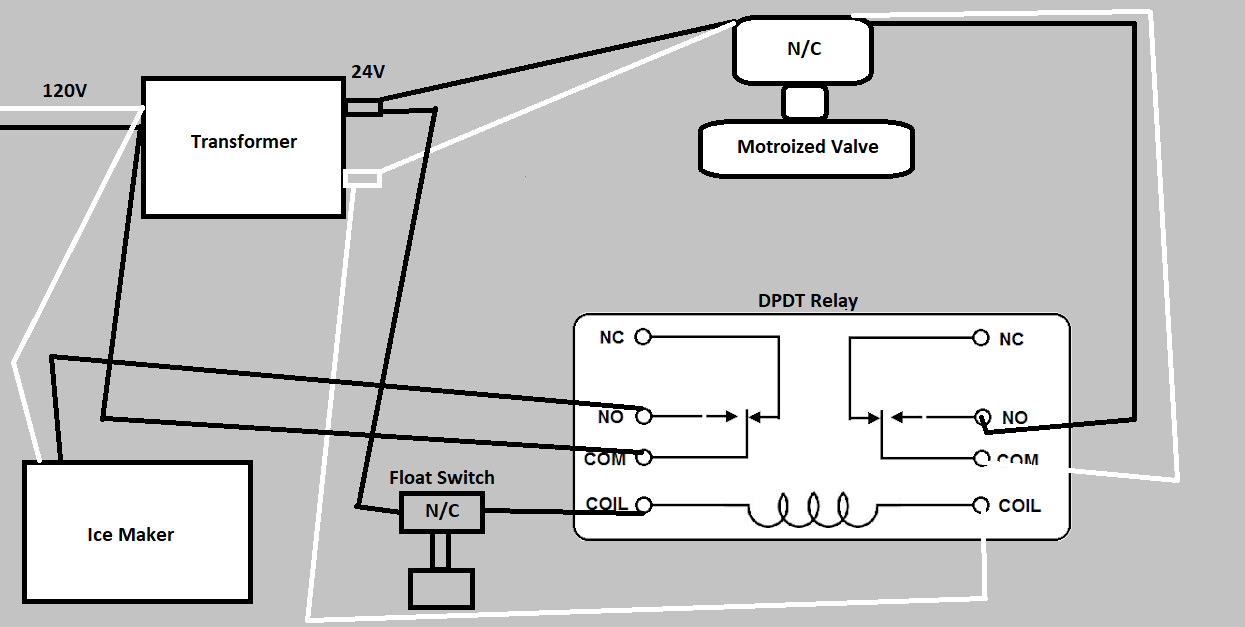 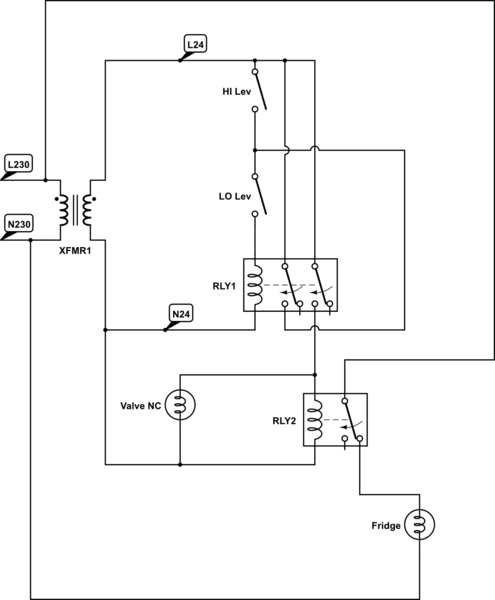 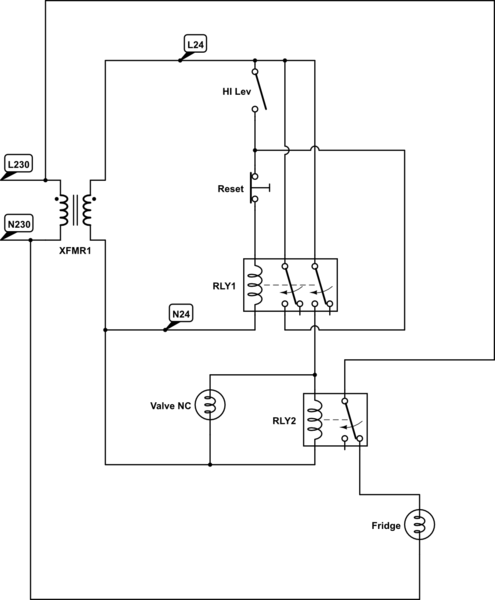 This is what I could understand from the essay.

Two float switches NO contact - if the water is present then the contact is made. First the LO Lev is on, then after accumulating water even the HI Lev turns on. At that time RLY1 is engaged which turns on the valve and the second relay RLY2 which cuts the power off to the fridge. One contact of the RLY bypasses the HI Lev, so even if the level drops below HI Lev, the RLY1 is self-sustained until the level drops below LO Lev.

Everything the same, except it has a Reset button NC in place of LO Lev. The whole state is reset only after button press.

NOTE: You need two searate relays to switch 24V and 120V, as they are different potentials. The relay's contact spacing is too little to have a safe isolation in between.

The Hi Lev switch engages the relay that is self-sustained while the power is present. If the water level is high the power is cut off to motorized valve and to the fridge. You can reset this state by simply removing the power after the water has been manually drained. 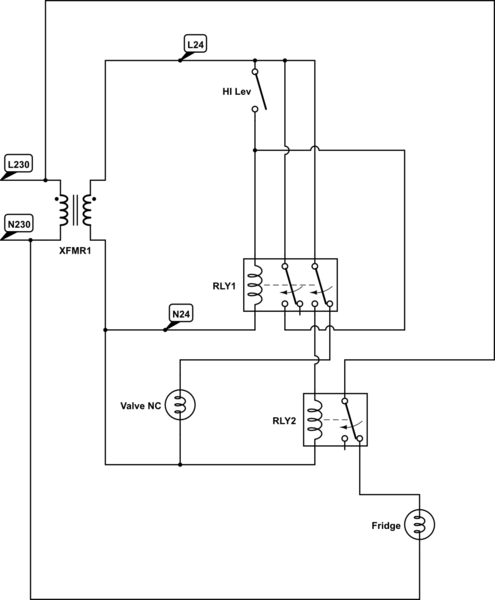 3rd variant (the one you are asking for, I guess):

Level switches are NC type. When the water level is below LO level, then the valve is powered on and the fridge as well. It stays such until the water level reaches the HI level. At this point fridge and valve are cut-off. They will turn on again only when water falls below LO level . The same rule applies if a power outage occurs. 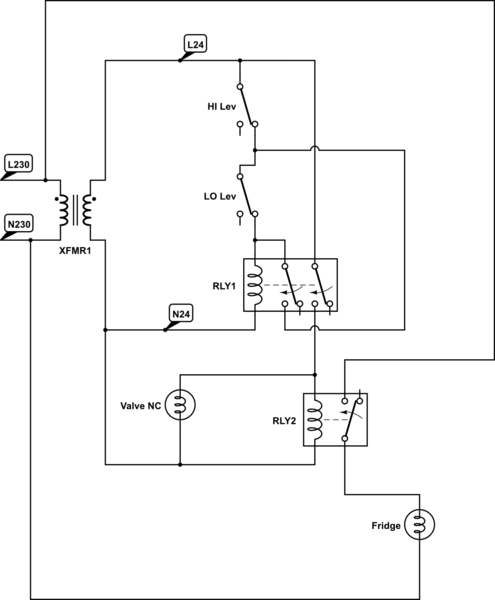 Not the answer you're looking for? Browse other questions tagged switches relay basic or ask your own question.

1
What do you call a switch/relay which switches on an appliance for a given set of time?
1
Cicuit to keep power supplied (12V DC) for a few seconds after power is cut?
1
liquid level switch and solenoid valve circuit
1
Need to control 100 Watt Pump With 15 Watt Float Switch
0
switch and relays
2
Two different circuits on one SPDT switch?
0
How to Implement Float Switch On/Off LEDs
0
Magnetic float switch + relay setup to control a water pump