I'm designing a sensor system where each sensor communicates via RS485 MODBUS in a high-density environment. Each line consists of 18 sensors which then goes to a gateway (Elfin EE11) that converts RS485 into ethernet which then goes into a server. Each line has a maximum distance of 30m from the last sensor to the gateway. Each slave uses a RS485 to TTL module to communicate with a MCU. Each slave operates at 5V and consumes up to 1A.

I intent to use the same cable to provide power to each sensor. This cable will also be running parallel to some power cables that are carrying 240VAC 30A. My current selection is to go with CAT5e cables that will carry 48V similar to a PoE system. Due to the power cables running in parallel, should I use STP cables instead of UTP? If I were to use STP, how do I ground the cable properly?

The standard CAT5e cable has 4 twisted pairs in it. I intend to use 2 twisted pairs for power. Another twisted pair to RS485 A and B respectively and the other as a spare. Is there anything wrong with this wiring? Do I need to put a termination resistor on each sensor device? 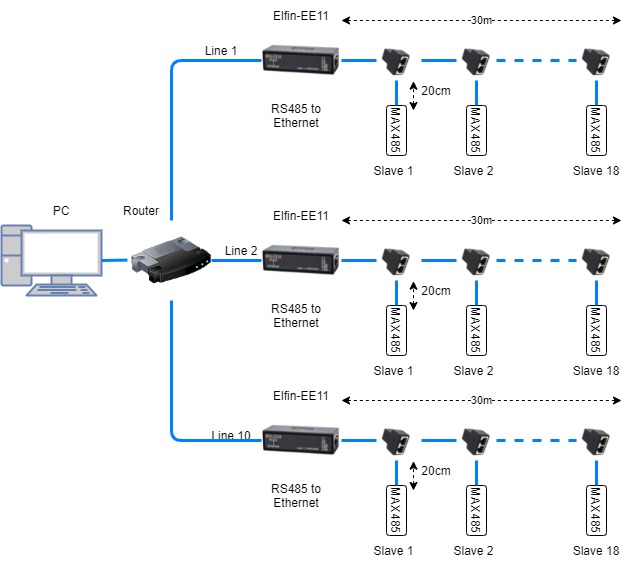 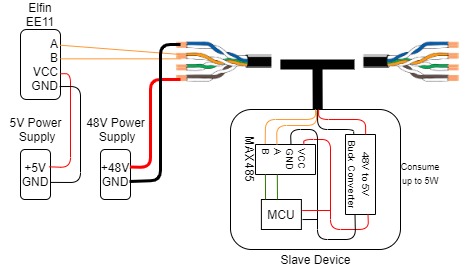 Any help will be much appreciated. Thank you in advance.

Modbus standard requires shielded cable, so you must use STP.

Modbus standard says data wires must be 24 AWG, or thicker, but not thinner.

Modbus standard says CAT5 cabling is rated up to 600 meters only, so it is not so good as cable that is actually rated for Modbus or RS-485, and the 100 ohm differential impedance of CAT5 cables may not be so good as cable with higher impedance.

So just as a warning, CAT5 may not be a good choice, so bear that in mind when you choose to use CAT5 instead of cable actually meant for RS-485 or Modbus. So if it does not work, change the cable.

The termination definitely does not belong to at each sensor device. The Modbus standard mandates that the buses are terminated, that there must be only two terminators in the bus, at both ends of the bus.

its bad juju to run comms in parallel to mains. You don't want to make a transformer.... shield or no shield. It's also called an electrostatic shield - not electromagnetic. How to ground the cable - you really have only one ground point as the supply is via the cable.

Make sure you have protection for the cable on the 48V supply - you don't want a fault to cause a fire.

You only need to terminate the ends of the cable, not each sensor. Depending on the data rate, drivers, cable etc, you may not need termination. Nevertheless, it is wise to anticipate the requirement.

Apart from A & B, you need 0V. Do not use the shield for this. You also need to consider voltage drop with the 48V supply - using isolated dc/dc converters on each sensor is suggested.

48V and RS485 comms is an unhappy marriage - most 485 transceivers wont appreciate 48 volt applied to the bus. The LTC1785 will tolerate it. There may be other chips as well, but the average 75176 or MAX485 will die. How does ethernet tolerate it? They use transformers and smart protection on the psu end.

You can use a dedicated TP cable, example: UNITRONIC Li2YCY (TP) You may not do a star topology, rather you "stitch" devices together with a single cable.

should I use STP cables instead of UTP?

A TP cable has a rather thick screen, so no UTP should be used.

how do I ground the cable properly?

The shield has to be grounded at one point, only. Since you will cut the cable into sections, you can ground just one cable for example: outgoing, so the incoming is grounded at previous device or master.

Do I need to put a termination resistor on each sensor device?

Only at both ends of the transmission line, as depicted.

Not the answer you're looking for? Browse other questions tagged wiring cables rs485 modbus cat5 or ask your own question.