I have come across many mobile phone chargers/power supplies that produce a regulated 5 volt output but I don't see any voltage regulator or a Zener diode inside. I want to know how these power supplies produce the regulated output.

Moreover, why can't we simply provide a 4.1 volts input to batteries instead of using 5 volts power supply with an overcharge protection circuit?

Here's an example of a simple circuit that is commonly used: 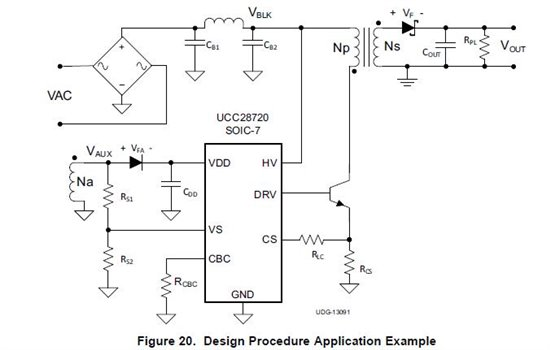 This is a flyback converter circuit.

The output voltage is regulated even though it's not immediately obvious how that's done. But note the winding "Na" on the left, it is one of the transformer's windings.

This winding supplied power to the IC and at the same time the voltage across this winding is coupled (through the transformer) to the voltage at winding "Ns" which feeds the output.

The IC has a feedback loop where is measures the voltage at winding Na (voltage Vaux) and regulates the on/off switching of the transistor connected to the DRV output of the IC, such that the voltage Vaux has a certain value. When that is done, the output voltage will also be fairly constant (it does not need to be exactly 5 V, up to 5.5 V is allowed, usually, in a good design).

There is indeed no zener diode in this circuit but there usually will be a "bandgap circuit" inside the IC. A Bandgap circuit can provide a reference voltage that is almost constant over temperature. On-chip Zener diodes do exist so that could be used as well. This circuit (or the zener diode) will provide a constant voltage that is used as a reference voltage to regulate the output voltage.

why can't we simply provide a 4.1 volts input to batteries instead of using 5 volts

Because the battery charger circuit needs to:

It is crucial to note that attempting to charge a Li-ion cell by simply applying 4.2 V (or whatever maximum voltage is required) is an extremely bad idea because:

Moreover, why can't we simply provide a 4.1 volts input to batteries instead of using 5 volts power supply with an overcharge protection circuit?

Because to get current to flow you need a higher voltage than your target. With your approach the current would quickly fall to a very low value when the battery terminal voltage reached 4.1 V and it would take multiples of the desired charging time to complete the charge. Running from a higher voltage means you can feed a constant current over a wide range of battery voltages and therefore shorten the charge.

I don't see any voltage regulator or a zener diode inside.

In all of the phone chargers I have examined, there is a very small switching regulator chip. The chip often has an internal Zener diode to provide a bootstrap supply for the chip. The chip is a switchmode regulator and sends modulated width pulses through an inductor / flyback transformer to get a 5V output. That output is smoothed by (usually) two capacitors. It is then fed into USB connector.

Why can't we simply provide a 4.1 volts input to batteries instead of using 5 volts power supply with an overcharge protection circuit?

You're talking about putting the battery charge-control circuitry in the wall-wart instead of the phone. That's the same idea, really, as putting the Electric Vehicle charger in the shore-side equipment instead of in the car.

Segue into this video, much of which is worth watching, but it goes to your point directly at 2:20.

Because nobody liked it when phones had proprietary wall-wart chargers, which would be necessary due to ever-changing battery tech (there are many kinds of lithium battery for instance).

So you're at the office and your phone is flat, so you email around "Does anybody have a Nokia 7-series phone? I need to charge". Remember that anyone? That was no fun.

Consumers wanted to buy a full suite of tools in the same battery system, with interchangeable packs. They were very distrustful/resentful of what they perceived as "planned obsolescence".

So manufacturers were locked into a standard built around the dominant 1990s battery, nickel-cadmium (1.2V nominal). The best they could do was nickel-metal-hydride (NiMH) which had the same nominal voltage, and similar enough charge curves that NiMH chargers could charge NiCd batteries without damage (still necessitated replacement of NiCd chargers). They did not have a viable upgrade path to lithium.

Because reaching it would require a customer-enraging reboot of their battery pack form-factors. This was directly caused by the blunder of putting the charge-control circuitry inside the charger -- if it had been inside the battery pack, the problem would be solved.

That's why you don't make that mistake.

Now, USB has settled in as the standard for phone and small device charging, and that is a wonderful thing.

Not the answer you're looking for? Browse other questions tagged power-supply voltage batteries current charging or ask your own question.

10
Why some phones need a 5V charger although the battery needs 3.7V only?

18
Is full wave rectifier better than half wave one?
7
Do cell phone batteries contain protection circuits?
2
Float charging AGMs while under load
5
Can't charge a cell phone with a power bank I built
0
Using a mobile phone power bank in place of AA batteries
1
How does the different types of fast charge affect a lithium battery on a cellphone in terms of heat?
0
Using two 12V batteries in series with both a 12V and 24V output
1
Need help sizing Zener diodes and varistor for 12V automotive power supply protection
0
Battery Discharged - But Potential difference exists without any current flow