I have been experimenting with soft latch switches. There is one that EEV Blog has developed that only uses 2 NPN transistors and a P-Channel MOSFET. The circuit is seen at 14:44 in this video.

I have connected that to a buck converter and I am observing some strange behaviour. You can find my full schematic below.

The connection is as follows: 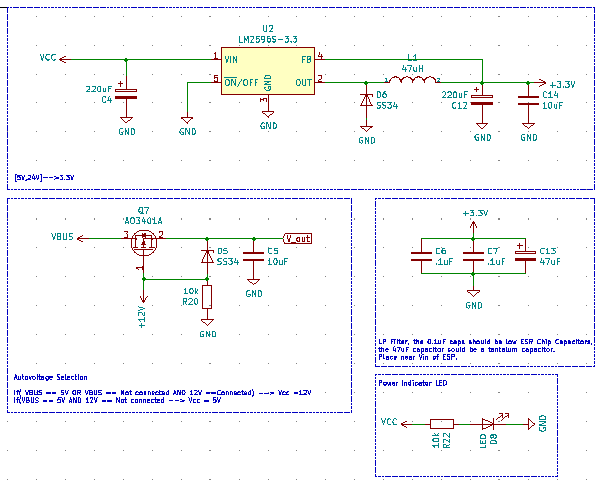 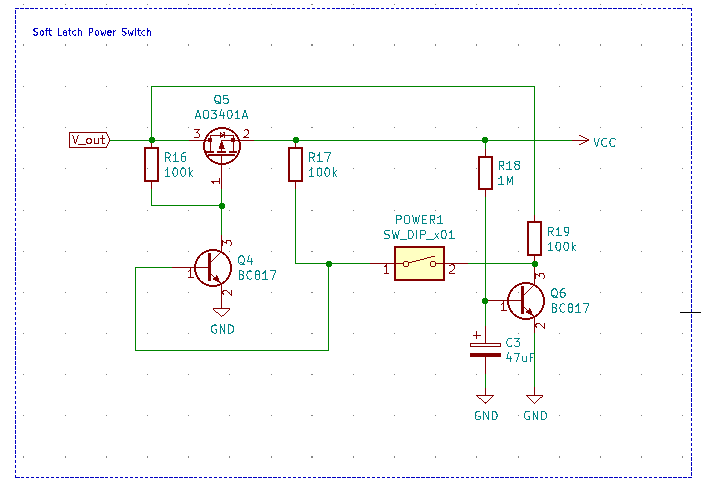 On power up the circuit delivers a 5V to the Vin of the buck converter and it works on regulating it to 3.3V. However when I press the button the voltage at the output of the soft latch drops to ~4.375V and reverts back to 5V when I release the button.

I am monitoring it on the oscilloscope and what I would expect in such a situation is an oscillation when the button is pressed. What I am observing is a fixed DC voltage.

What may be the cause of this? I don't really understand what is going on. Any input would be appreciated.

It works now however, rapid follow up pushes do not work. It starts turned off, on pushbutton turns on, on follow up push button it turns off. If zou push one more time after that it starts oscillating. So you need a couple of seconds between rapid turn on/off events. But nobody needs such an application.

On connection of inductive load the turn on event happens faster than the turn off. Again rapid turn on/off is not possible. One has to wait aproix 1-2 secs between rapid pushes.

You have drain and source swapped on Q5. The body diode is passing current regardless of the state of the gate.

If you want the circuit on at startup, add a small capacitor (0.1 µF) between the gate of Q5 and ground.

You have a similar problem in your "Autovoltage Selection" circuit. If you apply +12 V to it, both V_out and VBUS will be driven to +12 V, again through the body diode of Q7. This would be very bad for the USB source if you ever connected both simultaneously. Swap drain and source here, too.

If you want a circuit that doesn't oscillate, here's one possibility: 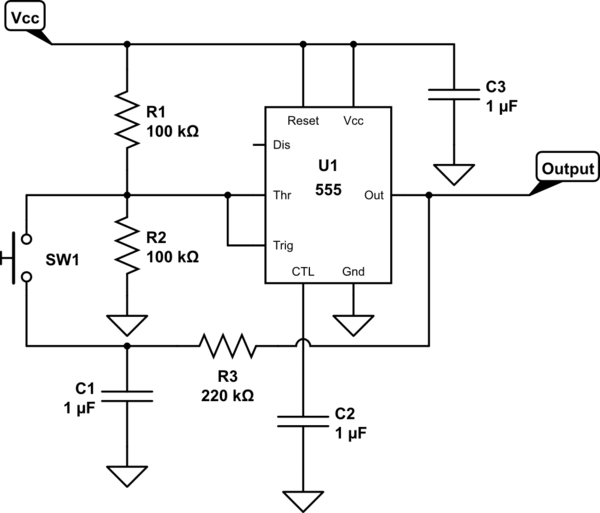 Note that in either case described above — and unlike other similar circuits — the output will NOT oscillate slowly if the button is held down. The bias resistors R1 and R2 are sized relative to the output feedback resistor R3 such that capacitor C1 cannot charge to the required switching voltage until the button is released.

Assuming you have inserted a diode which prevents a high capacitance load to feed current backwards to the latch and reversed the mosfet so that its drain in the right:

I guess your switch and your hand collect enough AC hum and noise to keep the circuit ON. Insert a resistor between the B and E of Q4, say 33kOhm make R16 smaller, say 10kOhm.

ADD1: It's possible that you have far too big C4. I would try say 5uF as maximum C4. The switch should be ON say 0.1s maximum.

ADD2: I guess the whole idea of inserting such circuit is to ease the current peak hogged from +5V when the lower voltage system is switched to +5V. That current peak would tear a mechanical switch. As well you can use a normal switch which pulls down the gate of the mosfet like this: 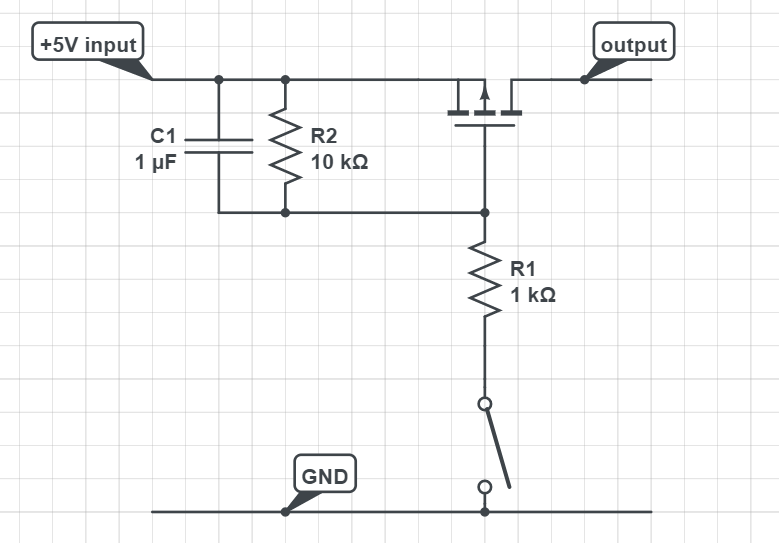 The circuit can be broken down into two parts: The first is the power switch - seems like it turns on, but does it turn off? If you connect the base of Q4 to gnd, does the circuit turn off?

The second is the startup delay. What is the voltage at the collector of Q6? If this voltage is not close to 0 (~0.7V), then investigate why it is not.

I'm assuming you've designed a pcb for this - if this is the case, what steps have you taken to verify the pcb design is correct?

Not the answer you're looking for? Browse other questions tagged arduino power-supply power analog buck-boost or ask your own question.

4
Microcontroller soft off circuit not working - why?
0
buck converter, no load start
2
Buck/Boost converter interaction with MCU in sleep mode?
0
Why the replacement of 7812 with R-78E12-0.5, DC/DC makes the circuit not working?
0
Which transition mode for the four switch buck boost converter is correct?
0
Car soft latch circuit auto triggers
2
What is the issue with my soft power switch circuit?