How do I select the Correct Diodes and Resistors for my LEDs?

I've replaced the stock incandescent bulbs with nice looking LEDs; however, the stock bulbs were 2-way and had 3 wires (one for ground and one to each filament).

The new LEDs are simply ON/OFF and have 2 wires. Since LEDs do not draw as much power as the stock filament bulbs, load resistors (that come with the LEDs) are included. These resistors get very hot because they pass a lot of current so the electronics on the motorcycle will not think there is a burnt bulb.

I got to thinking that I could wire a Normally Closed relay just past the Turn Signal Module (TSM) so that the LEDs were ON until the TSM sent the "ON" signal - which would cause the LEDs to blink OFF.

The more I thought about how simple this would be to do, the more I thought that this has to have been done by someone before, so I did some research and found several posts where people have done this.

Different posts use different resistors, then I started discovering where some people were clever enough to place a diode and a resistor in parallel so that the LEDs would dim or get brighter with the blink signals, making them appear to be a 3 wire setup.

So far, the best "How To" I've found is a thread called Converting 2-wire to 3 wire Signals on the R6 Forum. This post talks about using electrical components from Radio Shack, but there is not one very close to me. It would be easier for me to buy the components online, if I knew what to ask for.

So, how would I go about getting diodes and resistors that are the right ratings for my application?

I've found a nice Blue Ox 6 Amp diode pack that is sealed to keep out moisture, which would be very nice on a motorcycle, but I don't know if 6 Amps is over kill or about right. eBay has 17,000+ diodes under $3, but I don't know how to pick what I need.

To answer the comments: The LEDs I have now only turn on when the turn signals are activated.

Q) What type of LEDs are you using? 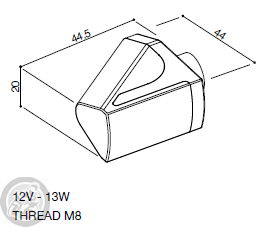 For 12-13W and a 12V battery, that equates to roughly 1A, so you could do with at least 2A diodes. This means anything above this is okay, 6A is maybe a little overkill but will work.

Follow the diagram in the thread and you should get dim/fully lit on the turn signal, the 470Ω resistor should be a 0.5W or above.

The 470Ω determines how dim the light is when the blinker is off, and will only pass around 25mA maximum (see Ohm's Law). The diode does pass the fully lit current of around 12W / 12V = 1A, so it ideally needs to be rated for at least double.

Not the answer you're looking for? Browse other questions tagged led resistors diodes or ask your own question.

2
Two power sources and two outputs with one switch

7
Using diodes to limit current to LEDs
3
calculating resistance for LED strips to use as parking lamps and turn signals
0
Using 25 IR LEDs with Raspberry Pi and Transistor
1
Question on Resistors for use with 5050 LED Strips
3
What is the purpose of the diodes on a Samsung LED TV backlight bar
0
LEDs with built-in resistors vs 12v leds
2
Powering high power LEDs without resistors
0
How to measure and power an array of unknown RGB LEDs?
0
How to light LEDs with Arduino without having any resistors