I'm new to community and it's my first question, so please forgive me for mistakes I could do referring to adding pictures and descriptions.

I plan to use 100 devices and connect them via RS-485 in half duplex manner as it can be seen in below picture. Each node will need max 150 mA and I plan to use 12V 20A power supply connected to 220V AC main. Termination resistors will be added to ends.

I searched for problems I might end up with RS-485 communication and saw that ground loops might be problematic. In that sense, implementing specific ground for communication and isolation is offered as it can be seen below picture;

However all of examples I could find related to ground loop problems in RS-485 mentions about ground differences according to different power supplies connected to building mains which are far away and might have different potentials although power supply reference is earth. Connecting grounds might create ground loops and interfere with communication signals. Large current might created in ground loop and might damage the circuit. If grounds are not connected, than ground potentials might be a lot different and transceiver could not handle ground potential gap.

In my case I will use single supply and connect all devices in daisy chain. And in worst case total of 15A will be used and I am afraid this might also create ground differences between devices. Would this will create ground loop like in the case with different power supply? I have no experience about transmission line but in my PCB designs I try to seperate digital grounds and analog grounds and also seperate high current grounds and connect them at one point to avoid ground loops. By the way, total distance (device 1 to 100) will be no more than 200 meters and baud rate is low (9600). I know isolation is the best way but from cost perspective this setup is my preferred one if there will be no problems.

Also I would like to ask about fail-safe pull up and pull down resistors connected to A and B lines. Having them only at the master device is enough or should I have them at every device?

communication transmission-line rs485 groundloops
Share
edited May 27 at 10:02
mertkon
asked May 27 at 9:03

To overcome those problems, you should start to think about using isolated transceiver. Additionally you would need few RS485 repeaters, because a tiny 485 transceiver can't drive 100 devices at once.

By the way, you don't connect the PE directly on transceiver, it's just for the ESD protection potential. If integrated into IC then yes, you connect it to GND of the secondary,... there are various possibilities best if implemented as declared from manufacturer.

Example 1 You can see GND3 is floating, tied to earth potential though a capacitive coupling 4.7n and by means of high resistance 1M. 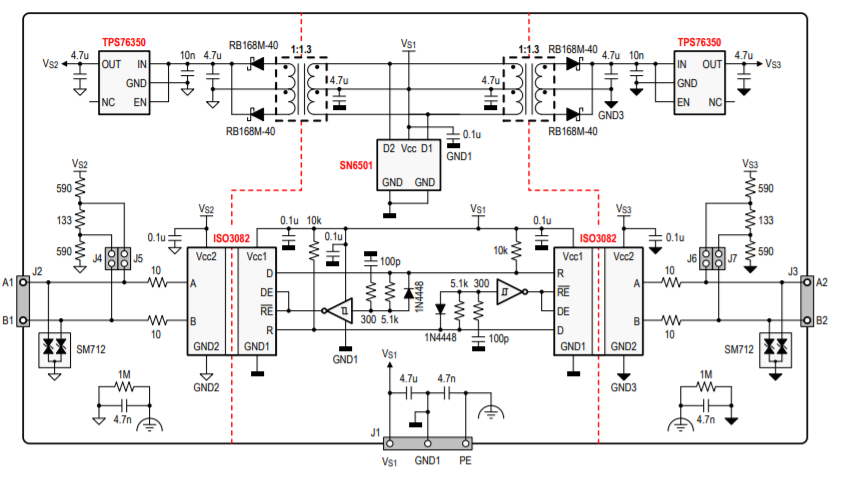 Example 2 Same manufacturer, now the earth potential is connected directly to IC. Note: In both circuits only A and B are connected to the other node. 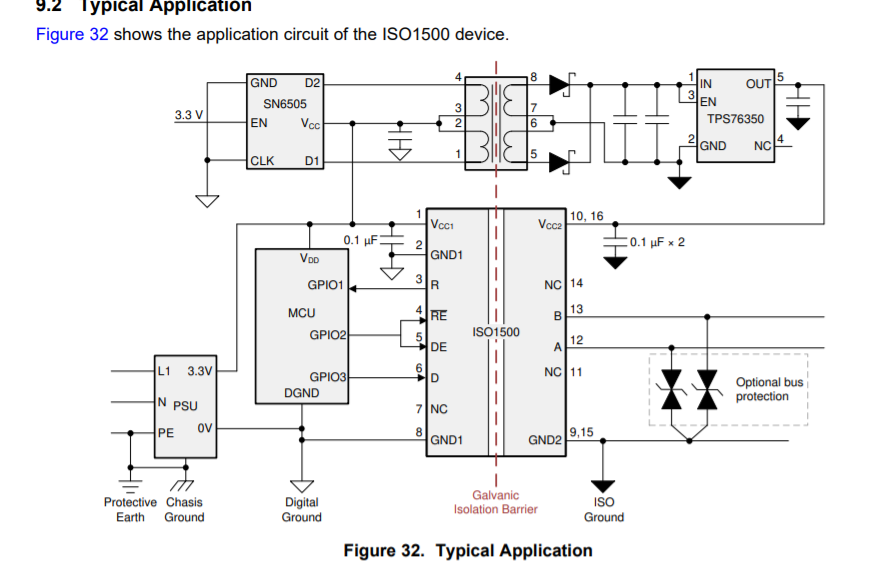 Galvanic isolation isn't necessary when every node in the network runs off the same power supply.

The signal ground is typically connected with a 100 Ohm resistor to the power ground at each node. ( RS485 Common Ground: Common Voltage or Common Wire or Both? ) 9 10

The recommended fail-safe and termination resistor arrangement has 4 resistors:

A few systems (for symmetry, so both ends of the network are the same) use 6 resistors ("dual fail-safe biasing"), 3 at each end, which arguably works slightly better than 4-resistor termination:

Not the answer you're looking for? Browse other questions tagged communication transmission-line rs485 groundloops or ask your own question.

7
RS485 Common Ground: Common Voltage or Common Wire or Both?