How does a PMOS LDO work?

The circuit diagram is taken from TI's LDO Basics. I don't understand how this circuit regulates the voltage, and neither do I know where I should start. But here's my attempt (with some values plugged in for better intuition): 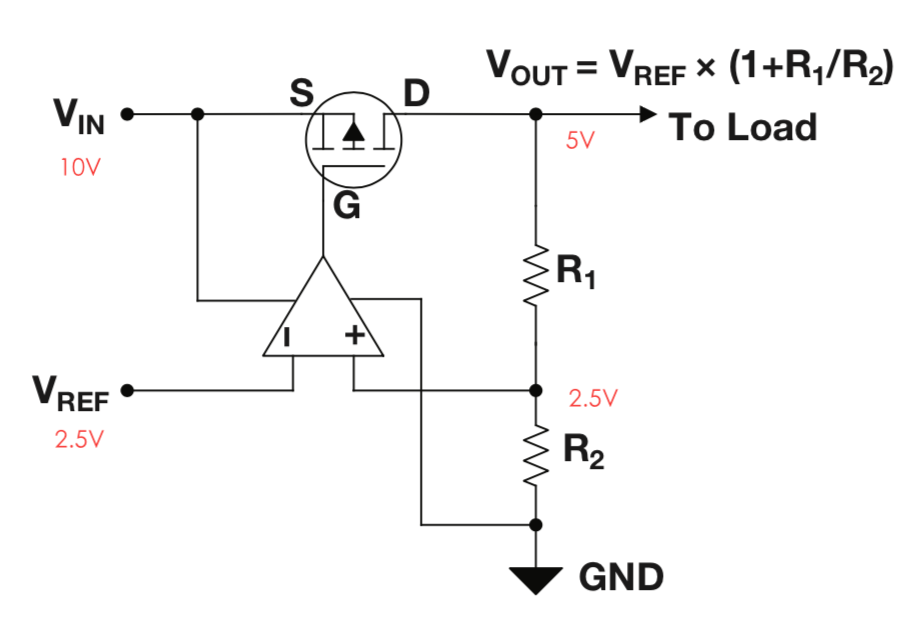 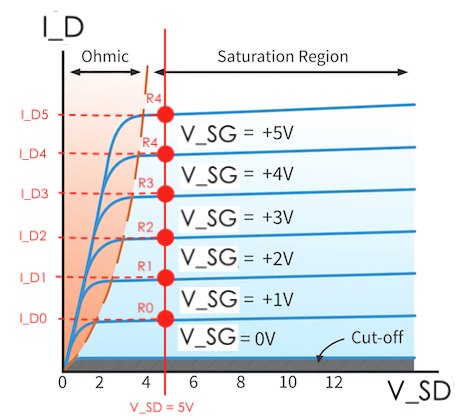 According to my analysis, VOUT should fluctuate...because V− and V+ can never be perfectly equal.

Why doesn't the op-amp oscillate?

This is a very good question. But the answer is somewhat complex.

It is true that if the inputs of an op-amp differ by very much, the output will swing to one or the other rail voltage. But there is a small window, where the difference in input voltages is (more or less) linearly amplified. How large is this window?

Any fluctuation or difference between V− and V+ will take the opamp's output (VG) to either rails (10V or 0V).

That is technically not true, the input voltages need to swing 100 uV, but intuitively, 100 uV is "so close to 0", that one would wonder whether oscillation would occur anyway.

In fact, if op-amps were "ideal" amplifiers, this small window would probably NOT be sufficient to keep the circuit from oscillating. But op-amps are not "ideal" amplifiers, but have an important component which is often not discussed -- a "compensating" capacitor.

A compensating capacitor within an op-amp acts as an "integrator" within the op-amp. A sudden change of input voltages does not cause an immediate change in the output. Rather, it causes the output to climb (or descend) at a specific rate called the maximum slew rate. In a system with feedback, this dampens rapid changes within the system. Hopefully, it allows changes to take place slowly enough that the op-amp can find a stable point within the very small window where the output is not driven to one of the rail voltages.

Is the compensating capacitor enough? Not always when op-amps are used as discrete components, and they are driving certain loads, for example capacitative loads, they may be prone to oscillation. The gate of a MOSFET is somewhat of a capacitative load (though not a huge one.) However, if an op-amp is designed specifically for a given application, for example in a integrated LDO, the op-amp designer can choose the compensating capacitor to be whatever is needed.

[Not part of your question, but you may be interested to know that the compensating capacitor is what is responsible for the 20 dB/decade roll-off of op-amp gain with frequency. That roll-off is the price paid for stability.]

The opamp will settle such that \$V_{gs}\$ for the PMOS is close to its threshold. The FET is almost never fully on or off unless very briefly during startup and step changes.

When Vout drops a little, so will the voltage at the IN+ of the opamp. Therefore the opamp output will drop also a little. This makes the \$V_{gs}\$ more negative, opening the PMOS a little more. That in turn rises the Vout again, compensating the initial drop.

Like any feedback control, this can become unstable if the output changes occur more rapidly then the opamp can compensate or detect them.

Not the answer you're looking for? Browse other questions tagged operational-amplifier voltage-regulator ldo pmos or ask your own question.

0
PMOS cutoff not working well
3
Adjustable PMOS current source
4
Phase margin analysis of a [diy] PMOS LDO [with LTspice]
0
Resistor values for OpAmp circuit with dc offset applied to inverting pin
0
Bandwidth of voltage divider with PMOS switch
0
How is it possible to pull up an op amp's output to its negative or positive rail when its input is floating?
1
Setting Rds(Ron) for PMOS for LDO
6
How does this MOSFET/Op-Amp voltage regulator circuit actually work?
3
Intuition for stability differences between PMOS and NMOS linear power supplies