I want to calculate the Noise-equivalent Power (NEP) of a photodetector. Hereto, I have to measure the Amplitude Spectral Density (ASD) of the detector and divide the result by the Responsivity:

The response of my detector is shown in the figure below: I measure the current as a function of time. Hereby, a pulsed illumination is applied between 0.0 s and 0.5 s. 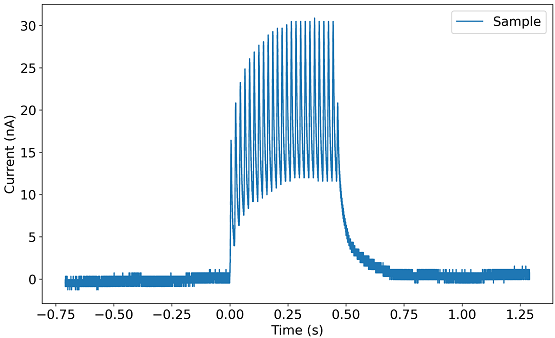 Next, I have to determine the Amplitude Spectral Density without any optical input. Hereto, I perform a Fast Fourier Transform on the detector output in the range between -0.7 s and - 0.2 s. The result is shown below. I have already scaled the data to be consistent with Parsval's theorem. 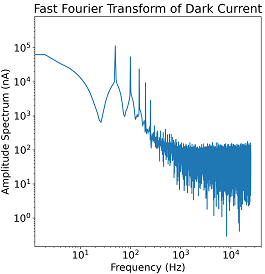 I do not understand how the calculate the Amplitude Spectrum Density in Units of A/sqrt(Hz) that I need for the NEP calculation from this graph.

My plan was to integrate the Amplitude Spectrum over the frequency range and then take the average, but this approach does not end up with units of A/sqrt(Hz). Where is my mistake and where does the sqrt(Hz) term come from?

To calculate NEP in W/Hz1/2 first calculate the total noise power within your measurement bandwidth. (When working with noise, power is the more fundamental quantity you want to use, rather than A or V.) To do this, get the noise power spectrum in units of A2/Hz. In your case, square the current spectrum you are showing and divide by the bandwidth of a single spectral bin. Depending on how you got your spectrum this may simply be equal to the frequency step along your frequency axis, or it may be more complicated if you used windowing functions or measured it directly with a spectrum analyzer.

The total noise power, in A2, in your measurement is the integral of this spectrum over your bandwidth. (You can also get here from the standard deviation of the noise timeseries measurement if it is collected at the same frequency/bandwidth at which you want to calculate NEP. Doing so would automatically account for your measurement bandwidth. There may be an additional conversion I'm forgetting though.)

To get NEP in A2/Hz you take your in-band noise power and divide by the bandwidth you integrated over. Take the square root of this to get A/Hz1/2 and apply your responsivity to get to the desired NEP in W/Hz1/2 for your bandwidth.

Its possible to do the calculation in fewer steps if you work out the math, but I think this breakdown makes it more clear what is going on.

The noise equivalent power (NEP) is a metric which expresses the minimum detectable power per square root bandwidth of a given detector. In other words, NEP is the input signal power that results in a signal-to-noise ratio SNR = 1 per a 1 Hz output bandwidth, the bandwidth here is a signal power bandwidth. The product of NEP and SNR for photonic systems is the total signal power per bandwidth.

To measure PSD of both signal and noise you need not provide "a pulsed illumination" in the measurement setup. The light source is 'on' for all the time of measurement with light, and 'off' for all the time of the noise measurement. Temporal dynamics is the result of both optical noise of the light source (photon noise) and electrical noise of the photodetector and the data acquisition circuit as these noises vary in the time domain. In the frequency domain, you measure the spectral distribution of these noises, and not of the light flashes. You need a fast ADC for these measurements; for measurements in the high-frequency end of your noise spectral range (tens or hundreds MHz) you may require an instrument called electrical spectrum analyzer.

Not the answer you're looking for? Browse other questions tagged noise signal-processing fourier signal-to-noise noise-spectral-density or ask your own question.