5 V, 2A cable and audio cable run parallel into circuit board, board fries, how?

This is a sort of forensic electronics case, where a circuit board was fried and we are trying to understand how. Perhaps someone can help or at least be entertained by this question.

I sent a sort of synthesizer to be shown in an exhibition space. The synthesizer is composed of an all steel table of sorts, and an axoloti circuit board inside it.

The board is powered via a micro-USB port that is supposed to typically receive around 5 V, 2 A from any computer USB port or USB charger. This particular board has been powered in this manner, with a USB cable connected to a computer USB port, both at home during the building of the machine, and in the actual exhibition space, while inside of the steel chassis, right before being fried.

The steel chassis has openings for all Axoloti ports. 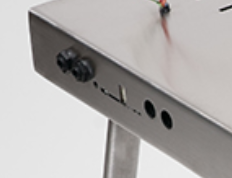 The Axoloti is fixed to the chassis merely via the plastic protection of the jack inputs which can be screwed in an out. 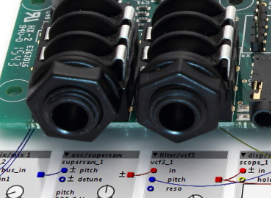 There shouldn't be any contact between the chassis and the board, except perhaps the micro-USB port itself. 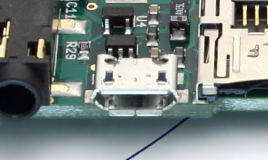 As mentioned, the board was plugged into a computer on site using a USB cable and was working without problems.

Additionally a stereo minijack connector and cable was connected to the board's stereo minijack output on one end and two speakers on the other end. Audio also worked without any audible interferences.

Finally, a third USB cable -initially disconnected- ran parallel and in close proximity to the sound cable, along a guiding string, and to an electric box on the ceiling, where a USB charger was connected to a terminal strip, itself connected directly to electric cables.

These are two images of the three cables on the synth side, and to the ceiling. From the electric box the audio cable divided to both sides and went to meet the speakers.

Here is a video of what I just described.

After switching the cables again the board remained unresponsive.

After the incident the assembly team measured the output of the USB charger on the ceiling with a tester, and said the lecture was around 5 V, 2 A as expected.

How did the board fry then? We can only think of two options.

(here the board schematics)

An argument against this option may be that the audio cable was already in place, when the board was powered through the computer, and working without audible interference.

An addition to this option is that, as seen in the images and video, the connector of the audio cable is metallic, and may have been in contact with the steel chassis.

As an addition to this option, both the micro USB port or USB cable plug AND the audio jack connectors may have been in contact with the steel chassis at the same time.

As a final plot twist, after changing the -apparently intact- USB cable (the one that went to the ceiling) with a similar one, they put an isolated Raspberry Pi board into the steel chassis, powered it with the new cable and plugged it into the same stereo minijack, and it did not fry.

The Arduino is playing a recording, and is serving as a temporary solution.

We do have a replacement Axoloti board, but as they don't seem to find the cause of the incident, we are reluctant to let them repeat the process with only having changed the cable, for fear of it being fried.

Any help very much appreciated.

A guess: There's a substantial voltage difference between the ceiling electricity network and the outlets available on the floor. Any system which is connected to both systems will be electrocuted. That needs nothing more than they are taken from different phases of building's main 3-phase system.

Shouldn't power supplies be isolated? Yes, but for practical reasons they still often have big capacitors between the DC output and the mains AC input.

Practical reasons = Switch mode power supplies are forbidden to emit too much radio frequency noise to air and to AC supply lines. The capacitors belong to filtering circuits which try to suppress illegal radio noise emissions.

The capacitors have high enough impedance to prevent lethal electric shocks if a person happens to be a part of the circuit, but the current may well electrocute the circuits. I have seen it happen numerous times.

Using grounded mains AC connections only with absolute zero exceptions is a good way to avoid the problem assuming the devices are properly designed to utilize the grounding, the groundings in the outlets are functional and no "smartie" has removed groundings for example to reduce ground loops which collect noise to low cost unbalanced signal wirings.

But it happened just when a cable was disconnected? The cable could be the one which connected together the grounds of 2 systems. After removing it the leak from mains AC was connected to less robust parts of the circuits.

Not the answer you're looking for? Browse other questions tagged power usb audio charge or ask your own question.

4
What's needed to get 100 mA from a USB port?
1
I have a .75 Watt/8 ohm speaker. Do I need to use an amplifier, what specs should I look for?
0
Make powered USB Cable for External hard-drive
1
Using an audio splitter when using Arduino to read from an aux cable
1
How to split audio signal into 3 separate channels?
3
Why is my 5 pin switching headphone jack shorting out my circuit when I plug a 3.5mm phono cable into it?