There is clearly some current flowing into the battery while in the constant voltage (CV) charging stage, meaning electrons must be flowing. Wouldn't that mean the amount of free electrons trapped in the graphite layer would increase and thus the voltage would (slightly) have to increase? Or is my assumption that during the CV charging stage electrons are moving in the same way as they do during the constant current charging stage - albeit at a much slower speed - incorrect?

If my assumption is incorrect and the amount of electrons trapped in the graphite layer does not increase during CV charging, then what happens inside the battery that causes the SOC to increase during this charging phase?

Last question (regarding image from batteryuniversity.com):

I don't understand why this would add extra stress when according to the charging graphs the voltage during the CV charge cycle is the same as the charger cutoff voltage. If for example charging to 4.1 volt (a voltage which is well within the specs for most Li-ion cells) and charging the cell to full saturation, would this prolonged charging at 4.1 volt (until the cell is fully saturated) be harmful to the cell?

The 'saturation' stage isn't any different as far as the cell is concerned, it's just a result of the charger having to limit its terminal voltage for safety (the battery would otherwise continue charging to higher voltage and capacity - until it blew up).

To first approximation a rechargeable battery can be imagined as a large capacitor (which stores charge) in series with a small resistance (combination of ohmic resistances and limited mobility of the ions in solution).

Now consider a circuit where this combination is charged at constant current until reaching a voltage limit, after which current changes to the usual exponential decay of a capacitor charging from fixed voltage through a resistor:- 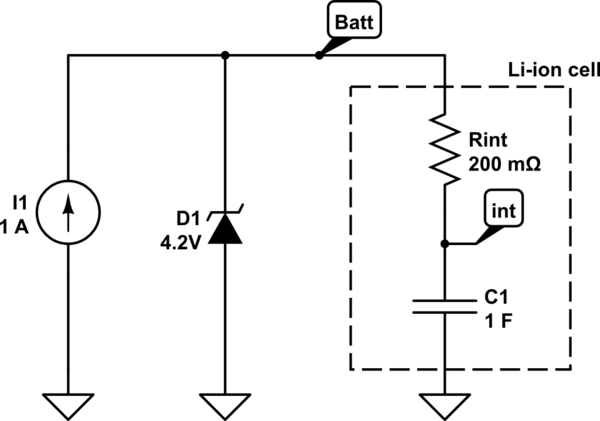 I1 represents the charger's constant current and D1 the constant voltage. Batt is the exterior battery terminal and int is the internal part of the battery that holds charge.

Assuming the initial 'battery' (capacitor) voltage was 2.9 V, the result looks like this:- 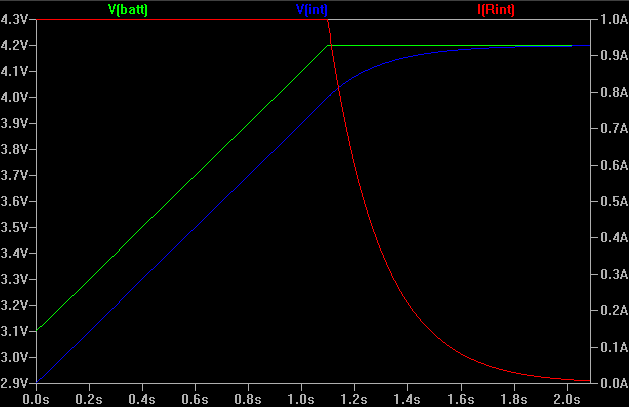 wouldn't that mean the amount of free electrons trapped in the graphite layer would increase and thus the voltage would (slightly) have to increase?

The battery's terminal voltage must remain constant because the charger is holding it there, but its internal voltage (which lags behind due to voltage drop across the internal resistance) continues to increase until it eventually reaches the terminal voltage. You can see this in the blue line in the graph.

In this simulation the internal battery voltage (Vint) had only reached 4.0 V when the charger switched to constant voltage mode at 4.2 V. By the time charging current dropped to 10% it had risen to 4.18 V, and as charging continued it eventually reached 4.20 V.

A real Li-ion battery is of course much more complex than just a capacitor and resistor, which is reflected in its non-linear charge and discharge curves. Apart from that though the principle is the same. In fact any resistance in the charging circuit beyond the charger's voltage measurement point will cause a similar effect, including resistance in the wires and connectors. If external resistance between the charger and battery is significant you may see voltage at the battery terminals rising slightly in CV mode.

The text under the image at the top of my post reads " Adding full saturation at the set voltage boosts the capacity by about 10 percent but adds stress due to high voltage " I don't understand why this would add extra stress when according to the charging graphs the voltage during the CV charge cycle is the same as the charger cutoff voltage.

As you can see from this simple simulation, the battery does get greater voltage stress when charged to 'saturation'. If charging is stopped earlier the battery's resting voltage will be lower, causing less stress both during charging and afterwards.

Not the answer you're looking for? Browse other questions tagged battery-charging lithium-ion charging constant-current or ask your own question.