I know that unlike the instrumentation amplifiers, the difference amplifier differential gain can be controlled by changing the value of more than one resistor. For the sake of experimentation, I assumed all the resistors are equal in resistance. I used the high power gain op amp LM324 downloaded from here 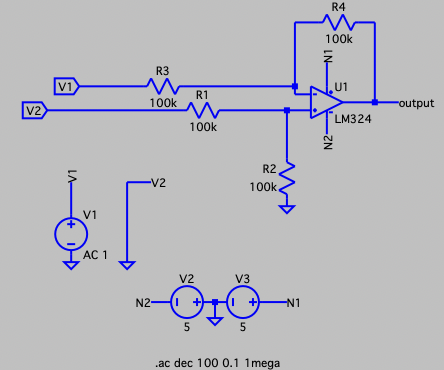 In this case, all the resistors values are set to 100kΩ.

From my experimentation the 100kΩ values for the resistors indeed yields a relatively satisfying frequency response: 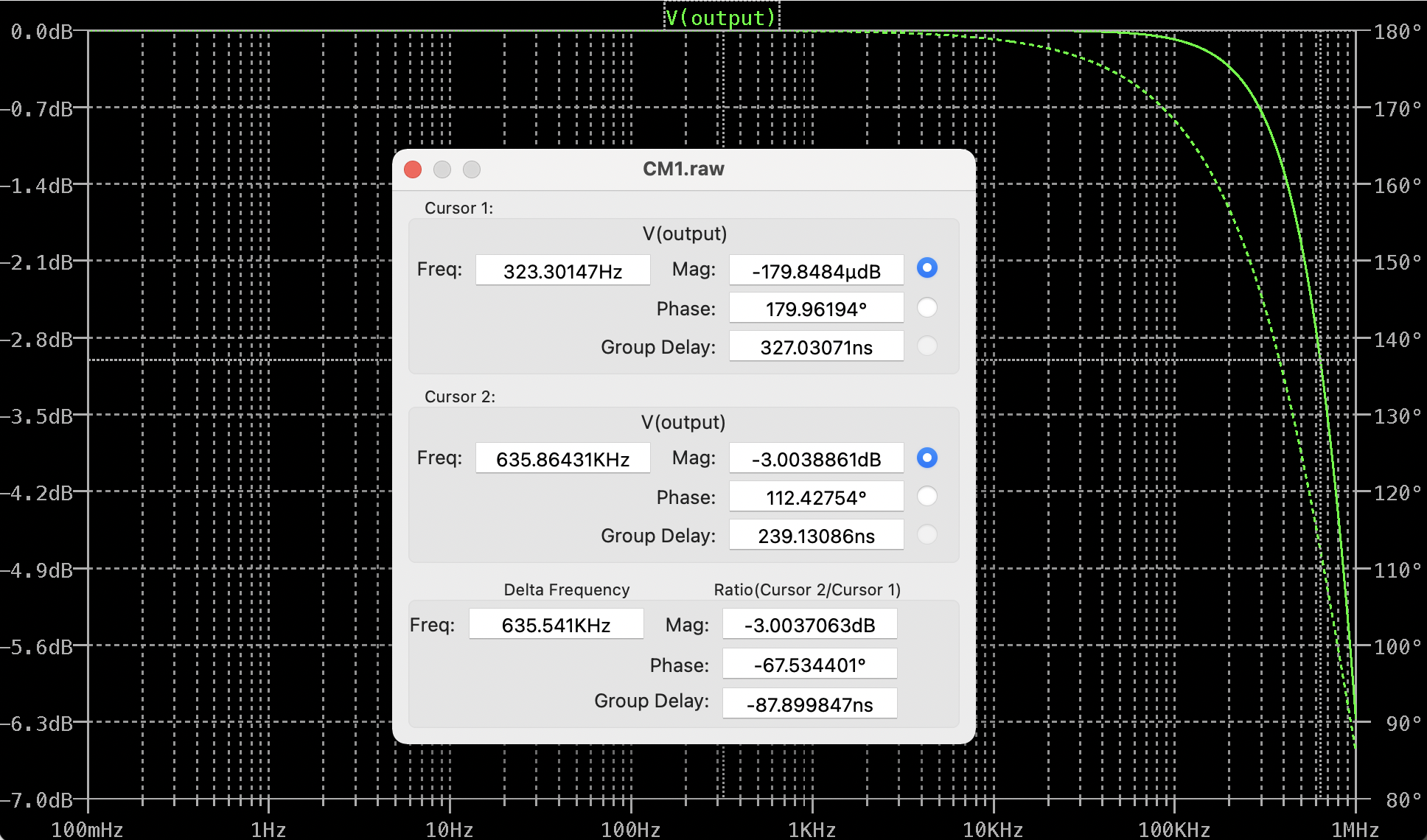 As I change to lower or higher values for the resistors, the frequency response also changes. Bode plots for: 10kΩ 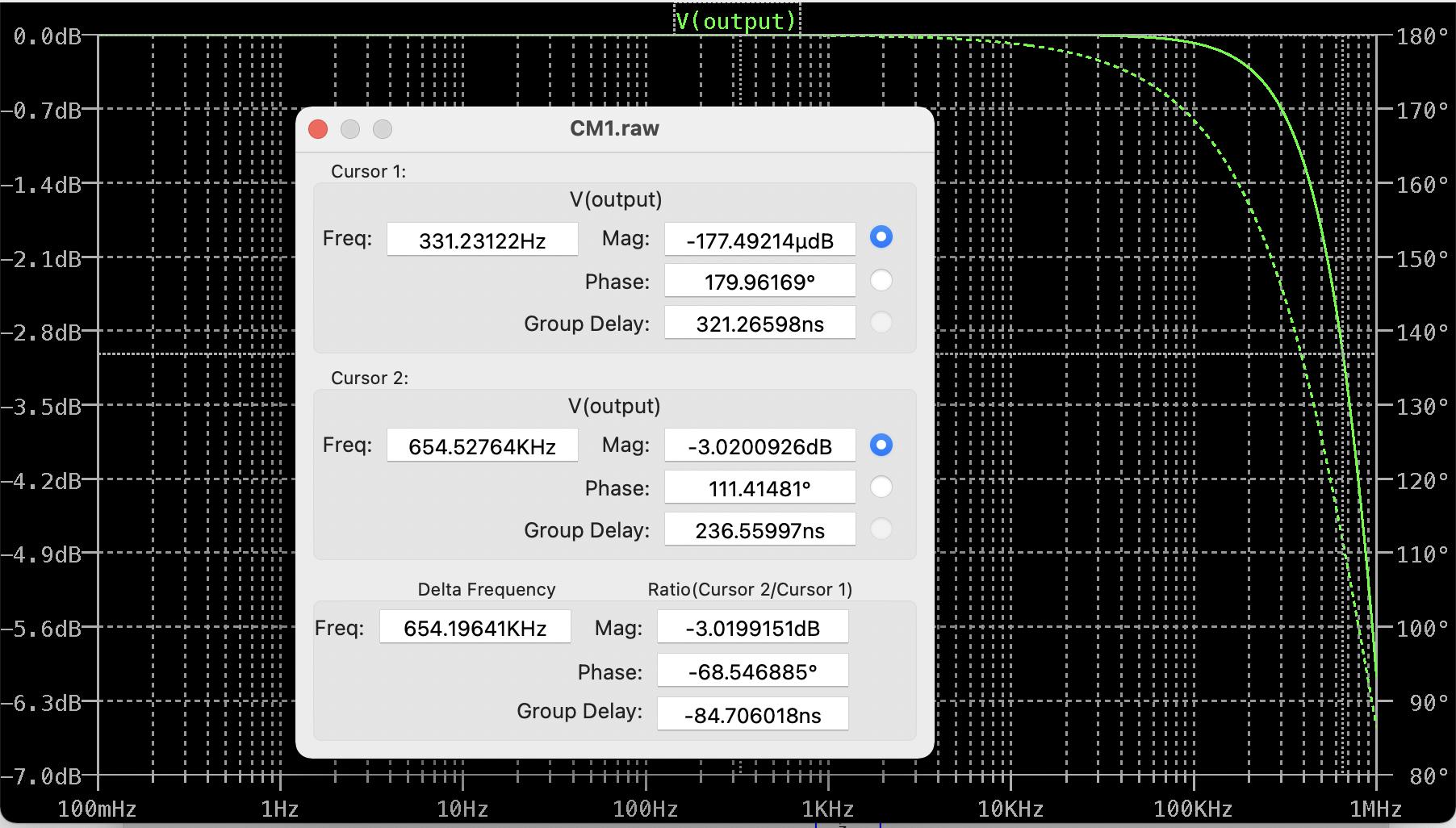 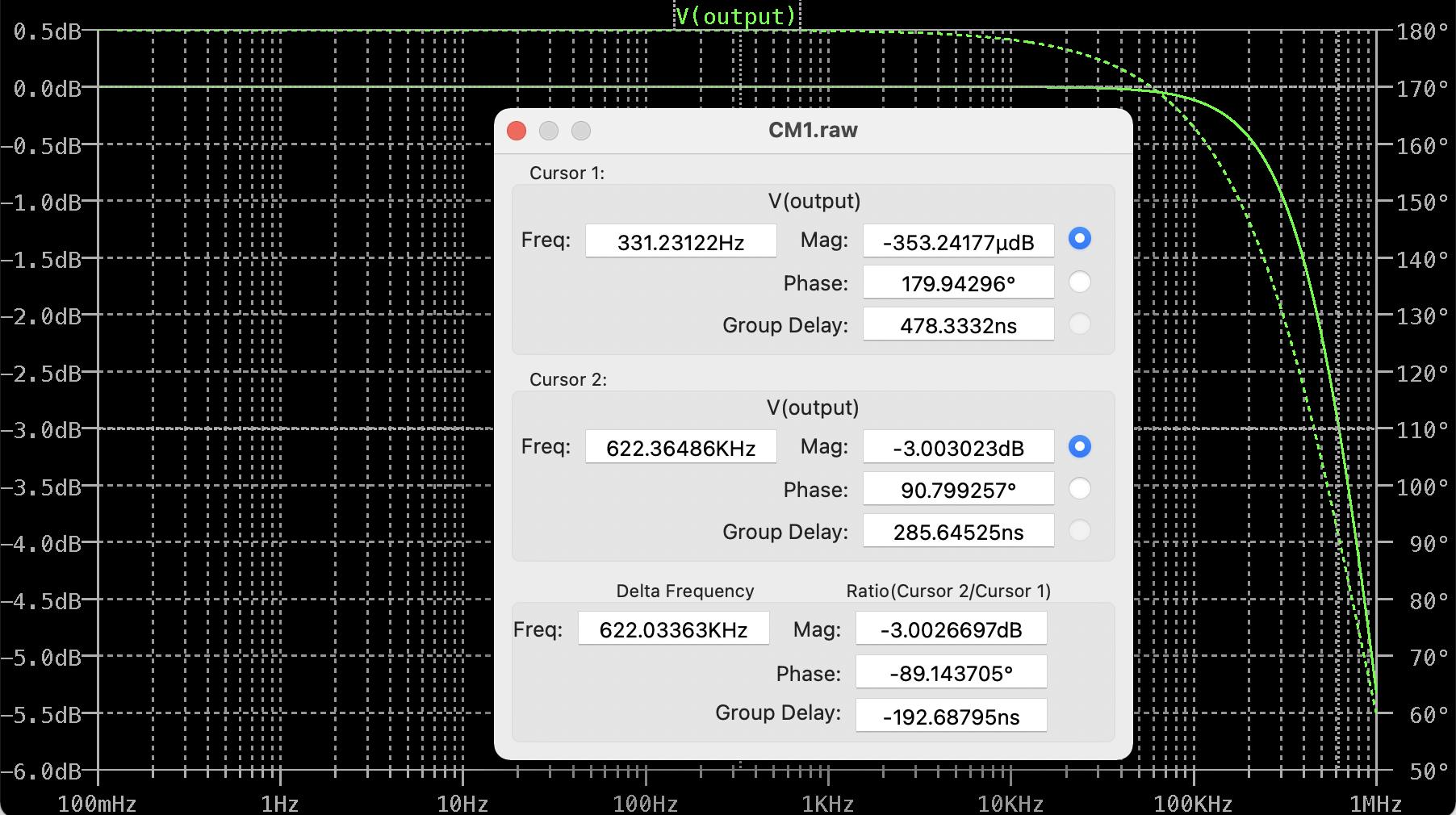 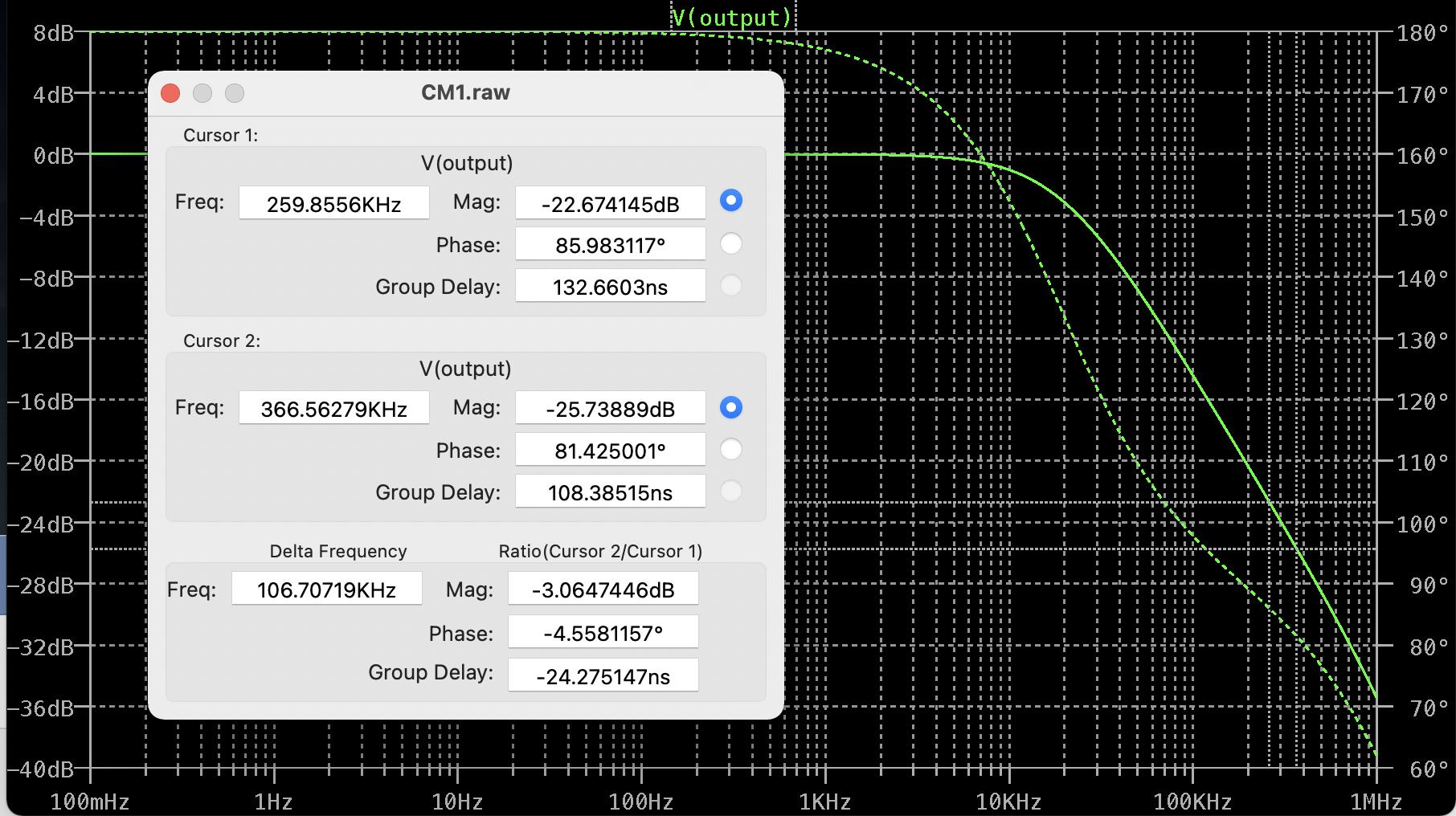 Looking for an answer, I found this thread that doesn't really answer my question.

This has got nothing to do with the op-amp being configured as a differential amplifier. Even in a simple non-inverting gain amplifier, as you increase the resistors (without changing the gain), the parasitic capacitors (input to ground and the parasitic feedback from output to inverting input) will cause the anticipated closed-loop gain to reduce. If you make the resistors smaller in value and push it too far, the op-amp won't be able to supply the current required by the negative feedback components.

As with most op-amp circuits, there is a goldilocks range of acceptable resistor values and, beyond that range, you start to get performance degradation.

Of course there are other things to consider; if you make the resistors too-high in value, input bias currents will start to degrade the DC accuracy of the circuit and this, in many cases is something to avoid.

Is there a deeper reason why setting all resistors to 100kΩ yields a better frequency response?

Well, the best response you got was with 10 kΩ resistors: - 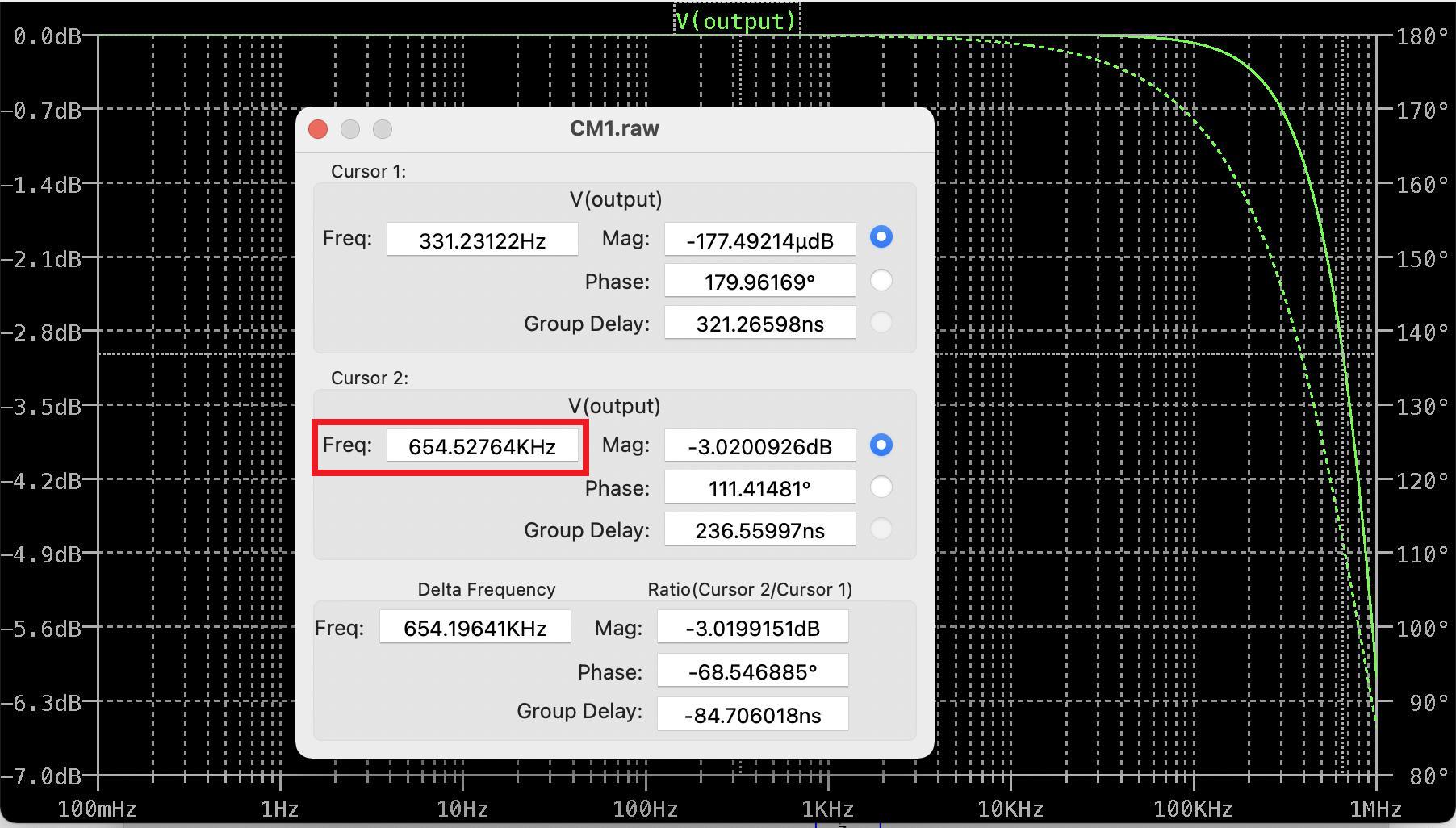 Again, it's a trade-off situation; there is a range of values that suit a particular application and most folk would default to 10 kΩ for the LM324. If it were a high-speed op-amp, you'd be looking at 1 kΩ resistors in the feedback (or even lower up at 1 GHz).

The opamp has input capacitance. Therefore you form RC filters with the feedback network affecting the frequency response. If the feedback resistors are too large, the inputs will be very slow. Therefore the opamp will "notice" too late about errors at its inputs/outputs and will overcompensate them eventually. This will lead to oscillations.

For very small resistances, you basically short-circuit the opamp outputs to other nodes. If these other nodes are also very low impedance (e.g. Ground) the opamp cannot reach equilibrium any more because it lacks the drive strength to do so.

Andy is consistent with my poor experience with old LM324’s having 10k as the sweet spot for feedback.

The old LM324 quad and LM358 dual opamps were designed for a low power supply current resulting in noise, crossover distortion, a poor high frequency response and a poor high level slew rate that cuts the levels of frequencies above a few kHz. – Audioguru

I took this question more seriously to point out the other weaknesses of this low-cost low current quad OA. I would have never chosen this old cheap OA for much more than low BW circuits such as when I used it for sweeping a Lexmark laser drum from -1.5kV to 5kV with a boost transformer rectifier in the nA range.

There are more reasons why 10k is the sweet spot and a pullup improves the performance, but if you need better performance, don’t rely on the LM324.,Otherwise you need to understand the internals and get your head examined. No just kidding. Falstad’s model allows you to change the slew rate and current limiter values from default on the LM324. Does your simulator agree?

I know this answer is a little late. However, I am not convinced the effect seen is due to input capacitance. The frequency response curves do not show a characteristic peak or resonance at the knee which can be seen when input capacitance is the limiting factor of bandwidth. See This question for information about the missing "peak" I am referring to.

Rather, I suspect, based upon modeling, that the cause of the change in bandwidth is due to the following process.

I have used a discrete component model of an op-amp differential input stage. 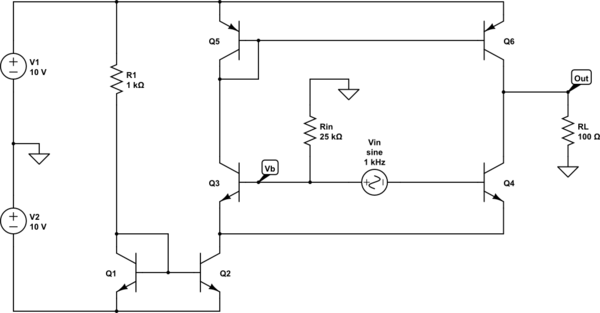 As \$R_{in}=75k\Omega\$, little has changed, although the output amplitude is slightly smaller

However, note that although the amplitude has dropped, the waveform is still visibly a sign wave. "Saturation" of the differential-pair or constant current source more gracefully alters the waveform, compared to the waveforms one sees when the output of an op-amp is saturated. (The actual mechanism is transistor "cut-off", but we often refer to the "saturation" of an amplifier, hence the quotes around "saturation").

Once again, if the open loop amplification of an op-amp is reduced, then the closed loop bandwidth will be reduced. I think it more probable that the results seen in the question above are likely caused by a reduction in gain rather than to input capacitance, due to the lack of a characteristic peak or resonance when input capacitance is limiting the bandwidth.