What affirms channel current direction in nMOS and pMOS?

What characteristic in MOSFETs coerces this distinction? Is it simply something to do with fabrication?

Because, as far as I understand, the distinction between the two comes from the substrate/wells (p-type/n-type in case of nMOS and n-type/p-type in the case of pMOS) and the gate voltages (+ve for nMOS and -ve for pMOS), but once the channel is formed then the channels along with the wells and the source drain contacts should be able to basically behave like a resistor, allowing channel current flow in both directions.

When talking about MOSFETs on an IC, these mostly have a symmetrical structure like this:

Note how Drain and Source are physically identical.

When using these type of MOSFETs (so when designing a circuit that will be etched on a chip!) then the direction of the current defines which area we call source and which we call drain.

In some situations that direction is unclear (typical example is a "passgate circuit" which is a bidirectional switch), then it is up to the designer to choose which side is the source and which is the drain.

The explanation above does not apply to discrete MOSFETs (and also on-chip High voltage MOSFETs) as these have a non-symmetrical structure. Here's an example of such a Vertical MOSFET: 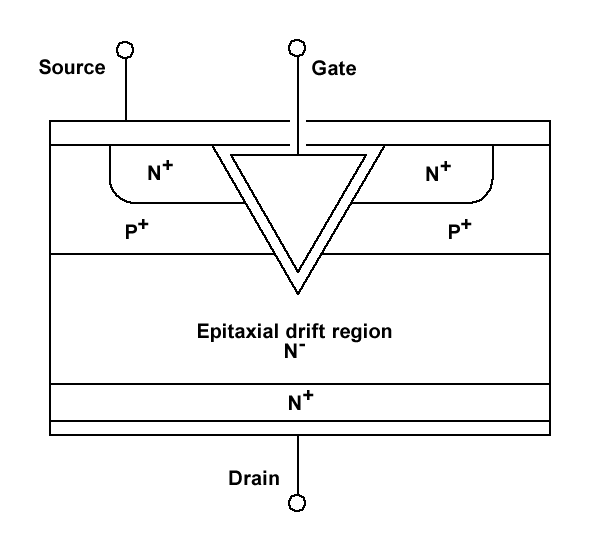 In such a MOSFET the Drain is constructed such that is can withstand a high voltage and/or it can dissipate a lot of power by mounting the device with the drain side directly on the metal case of the MOSFET and mounting the MOSFET on a heatsink.

They can conduct in both directions, but you have to take into account also the intrinsic diode.

Example of N-MOSFET. They are both correct, except that 2nd is almost useless since it won't work as ON/OFF switch.

it is a common phenomenon to presume...

To presume something wouldn't be regarded as a phenomenon (not in humans anyway).

Channels can carry current in either direction because there is nothing in particular about the channel of a MOSFET that makes it uni-directional to current. MOSFETs generally have a 4-quadrant response to the applied drain-source voltage: - 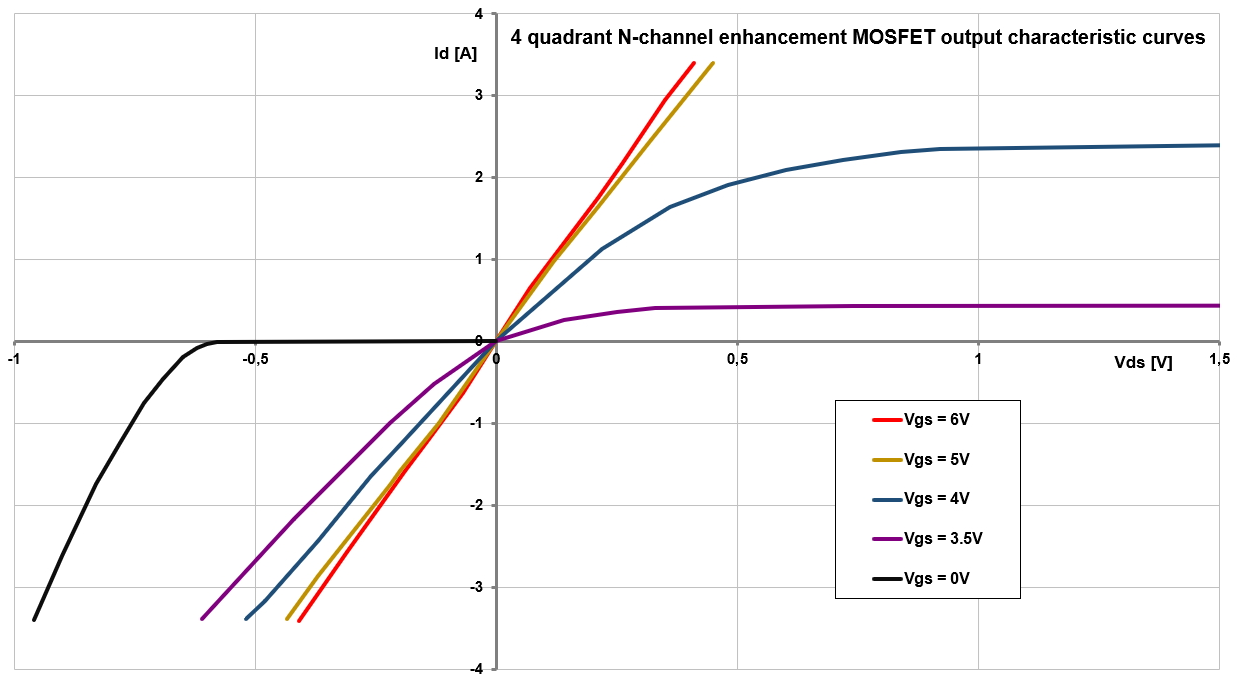 I think the part of the discussion you are missing is that for a generic, four-terminal MOSFET it is possible for the source and drain to be swapped depending on the applied voltage. For an NMOS transistor, the source is by definition the terminal at the lower voltage so current always flows from drain to source. For a PMOS transistor, the source is always by definition the terminal at the higher voltage so current always flow from source to drain. If you think about how a bidirectional transmission gate works in CMOS VLSI design you can see this behavior, as the notion of "source" and "drain" flips when the direction of current flow reverses.

Sometimes MOSFETs are packaged as discrete devices with only three terminals. The MOSFET body will be connected to one of terminals, which effectively forces that terminal to be the source.

For a four-terminal symmetric MOSFET, the terminology of "source" and "drain" pertains to the locations where the channel carriers travel from, and to, respectively. An nFET has electrons as the majority carriers in its channel after it inverts (from weakly p-doped), and as they flow from source to drain, the conventional (positive) current is drain to source.

On the other hand, on a pFET, holes flow from source to drain in an inverted channel formed in an n-substrate or n-well, and hence the conventional current flows in the same direction.

It's worth noting the following points:

The FET works as a (bad) diode in the other direction, so when you design a circuit, that defines what kind of FET you can place.

Not the answer you're looking for? Browse other questions tagged mosfet nmos pmos or ask your own question.

67
MOSFET: Why the drain and source are different?
21
Why so many pins for the MOSFET's drain?

2
NMOS saturation mode: why is there no channel?
2
Turning an NMOS with substrate terminal into a PMOS
2
What will be the value of saturation current in this series NMOS/PMOS circuit?
0
High frequency small signal model of PMOS vs NMOS
0
NMOS current flowing equally in both directions in SPICE simulation
0
Deriving the NOT logic gate using PMOS logic
0
synchronous buck - nmos current flow direction
0
Capacitances in a PMOS transistor: what about the n-well?
3
Intuition for stability differences between PMOS and NMOS linear power supplies
0
PMOS/NMOS current direction and digital logic