Network magnetics: Getting information past a "dead" wagon in a tunnel

I want to design an inductively-coupled network connector for the rail industry. The goal is to have a data link along the whole train.

Some key points to consider:

I had a look at the electrical setup of Ethernet. I saw that there are always pulse transformers for galvanic isolation (and a commom mode choke between the cable and the board.)

I had the idea: Why not make a physically separable pulse transformer to transmit magnetically? I wanted to build a demonstrator network which looks something like this:

I'm very happy for any help I can get, thank you!

Here is visualization of the idea on the coupler head with 3 pot-cores set in resin inside a sturdy milled case: 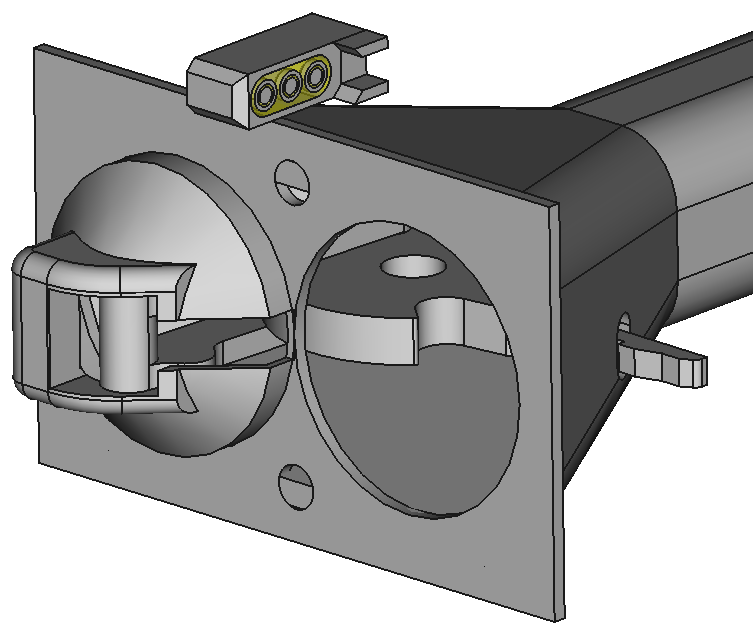 *Here is some background to my task: I'm in an industry comittee looking into freight rail automation. We want to design a highly reliable communication network for freight railroad cars.

The main problem is that the rail industry is very conservative, so everyone goes with the purportedly "tried & tested" design. In the passenger transit area, electric couplers have been in use for around 100 years with hundreds of individual electric pins (the rail industry still a fan of hard-wired functions) which wear, have to be kept clean and are protected by flaps/doors and are often heated to avoid problems with moisture. (You can see the doors open and the bare pins on each side of the coupler at minute 1:10 in this video.)

There is just no way that this is going to work reliably in a freight environment. Even if we assume passenger-level care for the couplers, in the passenger world you couple 2-3 units maximum, not 30-100.

That is why I wanted to design a system which is powered by axle generators and buffer batteries, but transmits via a physical ink on the coupler via an inductive connector. I would like to avoid simply going fully wireless because of 2 reasons:*

My answer is forcibly high-level as the problem is multi-faceted and allows different solutions.

Objective: transmit data between wagons of a diesel train that has no electric train lines , including reachability of wagons despite one in the middle may be without electric supply. (hope it is correctly synthesized)

Solution1. Wireless connection. It works, there are several examples i the literature and in practice of such connection, e.g. for passenger WiFi and onboard cameras (safety). Even in tunnels propagation at some tens of meters is viable: there are publications in the literature for propagation characteristics inside passenger wagons (yours I think are solid freight wagons) or in the air gap between train and tunnel wall. At 900 MHz and 2.45 GHz I did myself tests of the channel response. -- as for the mentioned mis-registration, there are code words, different networks (SSID), etc., so I would not say it's an issue when doing train composition. When the train is assembled, though a wifi connection the operator can confirm the wagon code and attach it to the so created network.

Solution2. Wired coupling, using e.g. an automatic coupler. Done tests in Cairo last week where the Rotem trains have mechanical and electrical couplers (separated) working in automatic mode. The signals are passed through a 74 pin connector. There is some work for protection against environmental conditions, but it can be done and there are already examples.

Solution3. Wireless transmission in the near field, using a magnetic transmitter that works e.g. within 1 m near the mechanical coupler. Or a radio transmitter, such s those working at 430 MHz, 868 MHz, or the multi GHz range that was mentioned above. What you need is to modulate your signals to pass them through the so established channel.

The overall scenario should include the time for development of solution and the "market size", that is if you want to develop a specific solution, or something that can be reused (and thus need to be a bit more flexible and with more performance than you need now, e.g. in terms of number of channels and throughput).

Last brick: there is always a safety aspect, that is reliability, availability and safety, because some of the exchanged signals may disrupt circulation or implement safety-relevant functions. If a CBTC works using wireless, then no issue, it will work also this one. But should be engineered for at least safety aspects (e.g. watchdog, packet/message loss, lack of response, etc.).

apologies for the high-level approach, but it's 30 years of working with trains and metros: it's not rocket science, but some aspects must be dealt with some care.

Mainly you will have the loco telling the wagons every 100 ms to not brake (fail safe) or *brake at X% and the wagons reporting back that they are all still there (train integrity.)

Ok so this is safety-critical so you have to conform to some functional safety standard, IEC 61508 or rather the train-specific spawn-off (I don't remember the number). This rules out a whole lot of technologies - for example Ethernet isn't real-time so it can probably not be used. Nor can you use wireless unless the link has been explicitly designed for safety-critical applications.

I don't know all that much of this area of application, but there will already be standards for this, so you shouldn't need to re-invent the wheel. https://en.wikipedia.org/wiki/Train_communication_network. That site suggests something called "MVB" or alternatively CANopen. The major advantages of using some existing bus system is that you'll save tons of effort in design and safety classification. They will also have solutions for how to connect the wagons together, which will be one of the main problems in the project.

CAN bus sounds fairly ideal if you can solve the problem of reliably connecting it between wagons. It's very rugged, multi-drop and the distances won't be a problem. Redundancy can easily be solved by two parallel buses sending the same info.

Congratulations for taking the effort to investigate new solutions to existing problems. Even if your effort doesn’t yield anything useful, you will have learnt something.

My suggestion is to use something like the ST60 ( st.com) very short range wireless link. These operate at 60GHz and have centimeter range and very high speed data transfer. This is an emerging technology , so its on the bleeding edge ( like the leading edge but might have some rough edges ).

I’d envisage you would have these embedded in some form of coupling that you could quickly mate and unmate which would also give a degree of shielding to take care of any leakage of the radio signal (at 60GHz this doesn’t take much). Then have some form of indication that the link is good.

Then there’s the work to ensure reliability and you’ll need some form of redundancy. For secondary validation you could have rfid tags - this would mean that for a hack to occur they would have to fake two reasonably secure systems. This would make the likelihood a very small number.

Of course, if you make millions from this, be sure to send me my 5%!

Note, we’re not supposed to recommend products here so the usual disclaimer- i am not affiliated with ST and I have not used that product. The link is to illustrate the type of technology.

See here https://en.wikipedia.org/wiki/10BASE2 but I am sure you will need different connectors in railroad conditions.

Sure, it is not of much use today, but has the proper topology for the task.

What can be a problem: Damage some segment (short or open) and the whole network goes down, not just the part after the damage. A "dead" wagon may be electrically dead, but it has to be at least properly wired for this to work.

I was thinking of using the following network topology to solve this: Network Topology

Fault tolerant addressable LED strips use the same topology to bypass one dead chip. It works.

In the comments you told me that Ferrite is very brittle. Also the beads are very small. What sort of losses and what sort of frequencies would be possible with a ~10mm mu-metal sheet core?

Using exotic and expensive materials like mumetal is not a good idea.

There is already a big chunk of iron connecting the two trains, so the first thing I'd try would be to wrap a coil along the green line: 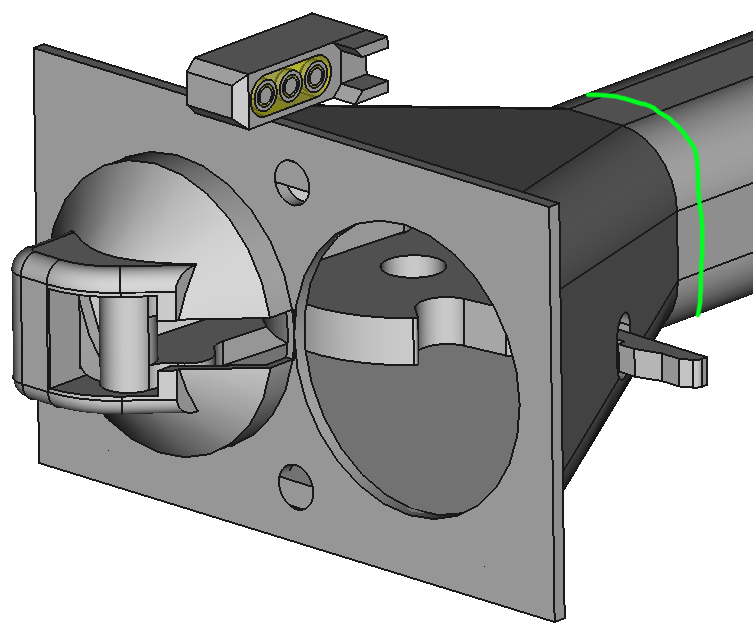 Then wrap a coil in the same place on the other side of the coupler. Two coils around a chunk of iron make a transformer that can be used to transmit signals. Measure what sort of coupling you get between the two coils. Optimize number of turns and pick a frequency. It will probably be pretty low, which is fine.

The magnetic circuit is closed loop and returns through the rails.

If this works, the nice thing is the magnetic coupling is done through a huge chunk of metal that has already been proven, instead of tiny coils with tight tolerances that will be worn down by vibrations and will have to be tested and redesigned until they last for a million miles, which will take years.

The protocol should be something really simple, like slow AM-modulated serial, with error checking code. Really low tech on the physical level, but with smart software.

This does not solve your "skip wagon with no power" problem. But, since the frequency is low, you can use a relay to bypass the unpowered board. If relay switch reliability is a problem, a solid state MOSFET relay with depletion FETs can be ON without any driving voltage.

I understand that the main problem is unreliable conductor contacts here. I would use the wires but with frequency modulated signals. This way it has the possibility that dirt's capacitance will keep its impedance low and signaling will go on. That being the physical layer, a basic master-slave scheme will fulfil the mission. As the transceiver circuits are parallel nodes on the line, the nonfunctional wagon will simply serve as the part of the line.

For the braking system, there also would be a backup mechanism indeed, which might be called "braking runaway", maybe, I just made it up :) If the wagon has acceleration sensor, it is easy to detect a negative acceleration and decide to activate the brakes, thus what runaway implies, it should be enough braking the main locomotive for the braking runaway. Maybe the wagon would prefer to use this mode as a fallback when it choose not to trust the electrical communication.

is this likely to actually work?

It is possible to put a very high power transmitter at each transmitter, and a very sensitive receiver at each receiver, coupled by your dead-car passive system: satellite systems have that kind of technology. But it doesn't just work, and it can't just work by splitting open and rewiring an ethernet socket.

Not the answer you're looking for? Browse other questions tagged ethernet passive-networks magnetics train or ask your own question.