I have a 12V 7Ah SLA battery which i use with my DC Fan motor (not sure about its voltage and current requirements may be between 12v to 18v). I use it with both battery and wall charger (non branded). The charger has 18v 7A~ output. While running on battery, the Fan runs for about 50 minutes on fully charged battery before becoming dead slow. I think the motor draws full 7Amps from battery constantly.

I want to extend that time because of power outage in my area by limiting the current drain from battery. Is it possible without power wastage / dissipation? Also if i use two 12v 7Ah in parallel to increase capacity what will happen.

Based on the information, I would guess the fan drains the battery at ~ 0.8C = 0.8 x 7 = 5~6 Amperes. The following graph was extracted and adapted from Yuasa, a traditional SLA battery manufacturer. 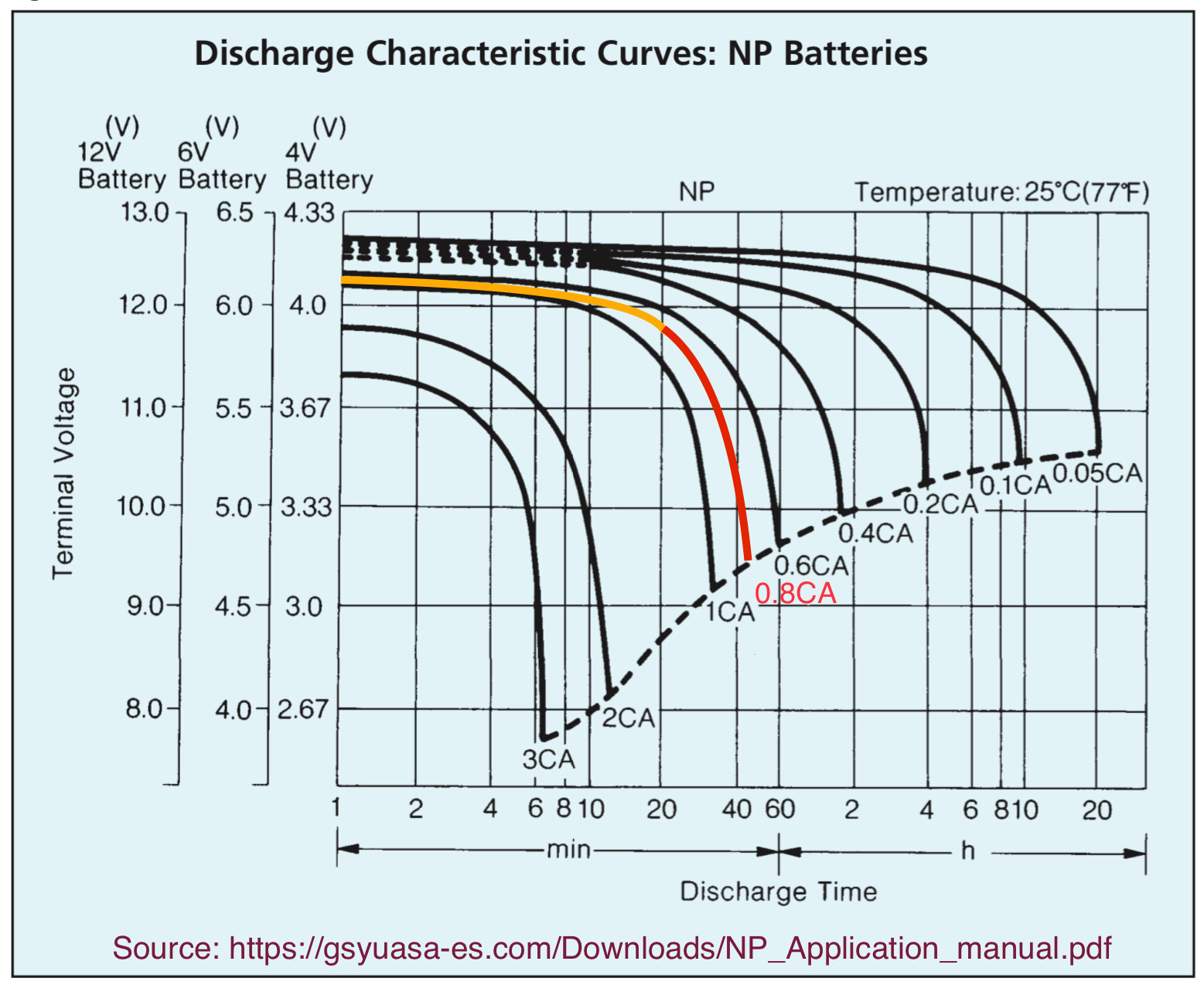 The added line in orange would be the initial discharge, more like a plateau. Bellow this “12V” region, the battery voltage drops more steeply, marked in red.

The recommended cutting voltage for such discharge rates 0.6C to 1C (4A to 7A) is 9.5V, for a 100% Depth of Discharge (DoD). Going lower than that wears even more the battery, more than the stress imposed by 100% DoD, as it is being over discharged.

Using 2 batteries in parallel has 2 advantages:

Battery Protection, could be addressed briefly too:

Imagine you could reduce the motor Speed (and Voltage) to 80%, the Flow would also reduce to 80% of nominal (unregulated).

This means that if someone reduces the Speed slightly to 80%, it would be the same as Doubling the battery runtime, as the power is just half of nominal. In this case you might not even need to use Two Batteries. The following graph exemplifies with actual Fan numbers what would happen if one reduces the power speed to this 80% of nominal (as 1700 rpm there). Compare arrows of Power (Bold Green) with Speed (Bold Blue): 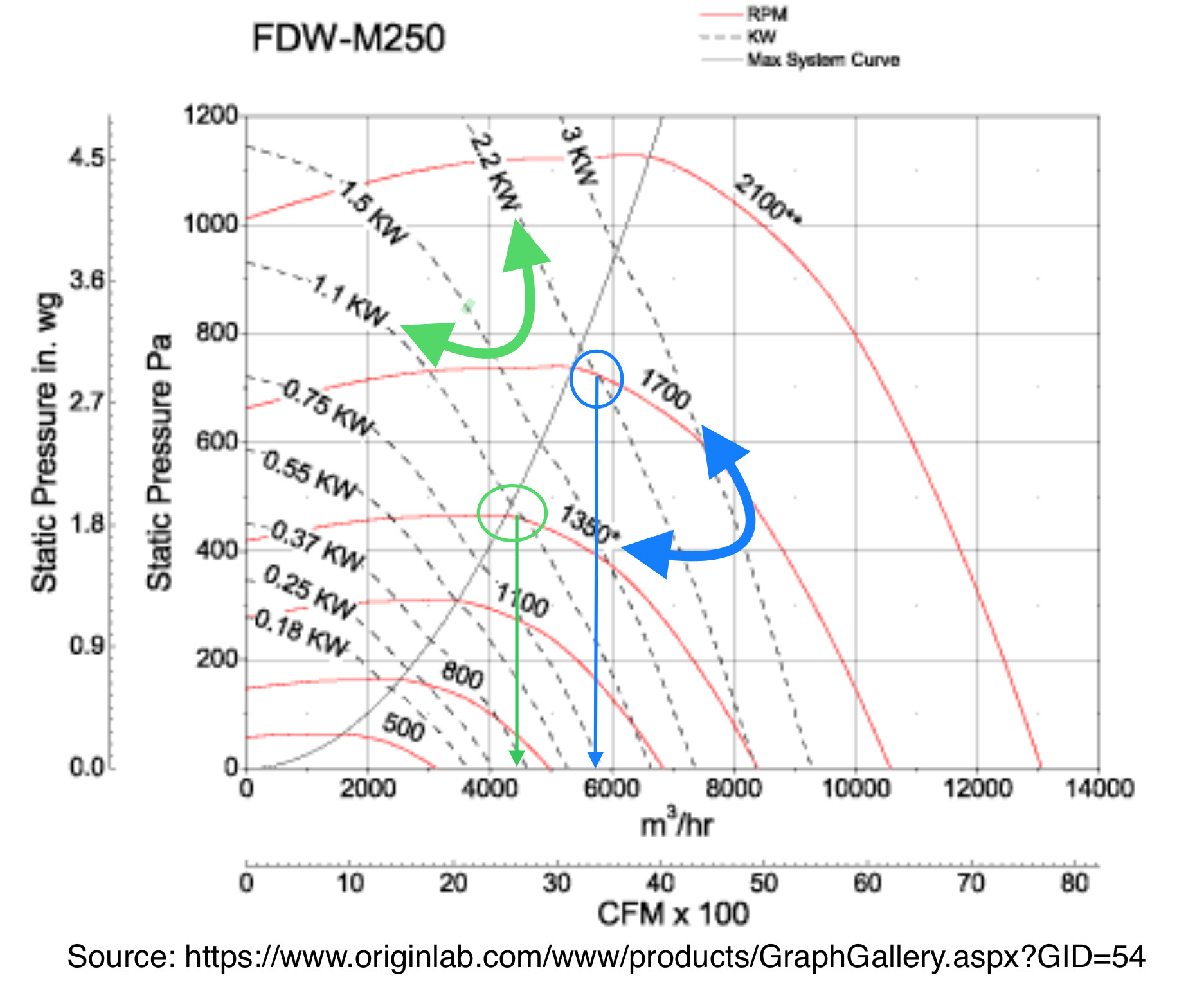 So, if you can use a Switched Mode CV module (as that “5A” rated module XL4015, but with extra Heatsink glued and near the Fan), you could adjust the Fan’s voltage to about 9V~10V and reduce the current consumption, doubling (or more) the running time.

When the Powerline returns, this reduced-power mode could be bypassed (manually, by relay, etc.) to resume nominal fan speed, while recharging the battery without overcurrent and preserving your Power-supply/charger from overload.

Your SLA battery probably wont like being charged from 18V at 7A.

If you use two batteries in parallel, then it will run for twice as long.

You could use a pwm motor speed controller between your battery and fan. If you don’t require the fan to run full speed, then this might be a good solution for you. Pwm doesn’t waste the energy. If you run at 50%, then your fan will run twice as long.

Not the answer you're looking for? Browse other questions tagged batteries 12v current-limiting or ask your own question.